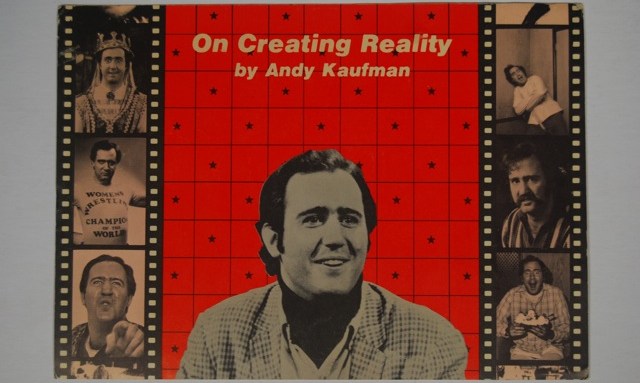 Elvis impersonator. Latka Gravas, taxi driver. Tony Clifton, abusive lounge singer. These are among the alter egos of legendary comedian Andy Kaufman, who died of cancer in 1984. Was he also an artist?

The show features an archive of Kaufmania, including ephemera such as performance notes, photographs, three novels he wrote by hand, materials related to his practice of transcendental meditation, thousands of pieces of hate mail, his record collections, show posters, his address book (which has the phone numbers for Woody Allen and Robin Williams), his X rays, and videos of unseen performances.

Speaking with A.i.A. on Wednesday, Berger said that the show is not so much concerned with whether Kaufman was an artist. “It’s more about questions than about statements,” he said. “How can we, the contemporary art culture or the comedy field, acknowledge the work of those whose genre or format we don’t understand?”

“His influence on contemporary art is undeniable, and this show acknowledges that,” Berger continued. “It’s a fact that he’s influenced people like Paul McCarthy, Mike Kelley, Trisha Donnelly, Laurie Simmons and Maurizio Cattelan.”

Berger discovered the materials in the garage of Lynne Margulies, Kaufman’s girlfriend, who was then in Los Angeles. Berger met her during research for a show on performance artist Stuart Sherman. “She had managed to hold on to all this stuff through various moves,” he said.

“Kaufman wouldn’t allow himself to be classified. He referred to himself as a song-and-dance man,” Berger said. “He was one of those who just did their work in a pure, committed way, without caring about how society defines them. Sometimes those people are the most profound, but often they’re the ones who get lost to history.”

To be fair, Kaufman was portrayed by Jim Carrey in the 1999 film Man in the Moon.

“But still,” Berger says, “all these years later, he’s an elusive, complicated figure. And that’s quite rare.”

“This project for me is ultimately about conversations,” Berger says. “I want to facilitate a dialogue that can reveal or actually produce information that would never come to light otherwise. A visitor might look at the record collection, then sit down with Joe Franklin and talk about a particular pop song from the ‘50s that, say, Franklin might have reviewed. Or it might be a more speculative conversation about Kaufman’s interest in transcendental meditation.”

MoMA PS1 will host a “Sunday Session” devoted to Kaufman on Feb. 17, featuring appearances by Tony Clifton and Lynne Margulies, and the New York premiere of a documentary on Clifton.