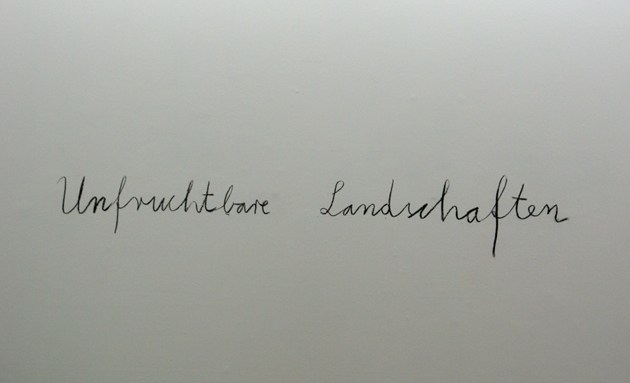 Anselm Kiefer’s (b. 1945) work brings to mind ruins and monuments, canvases coated with crumbling impasto, lead, tar and straw to depict the rich, mythical mnemonic layers of tragedy and regeneration. Yet a small-scale, even understated side of the artist is currently revealed at the Yvon Lambert gallery in Paris. “Unfruchtbare Landschaften”  (“Barren Landscapes”) is an exhibition that for the first time shows books made by the painter at the aged 24, in late 60s Germany.

The gallery’s two rooms are filled with rows of glass display cases, inside which the pieces are lined up in a formal, archival-like manner. Generally printed on the standard A4 format, the hand-bound books are open at pages selected by the artist; others are left closed for the viewer to look at the painted cover.

On the back wall of the first room the words “Unfruchtbare Landschaften,” inscribed in pencil by Kiefer, distill the importance of handwriting to the experience of text. It creates the feeling of school boy-like humility.

The books aren’t organized by theme or style, and instead present a neat jumble of three main recurring thematics: the series “Für Jean Genet” (1969) features watercolors of flowers, collaged with dried roses and photographic self-portraits of the artist making the Nazi salute in a woolen, floor length dress. All bear an inscription to Genet, and explore the French writer’s combination of provocation and effusive, flowery images. “His father had been active in the war and had talked to him about it; there was a real weight for the new German generation,” said gallerist Yvon Lambert. The weight of forbears is strong in these smaller works.

The series “Unfruchtbare Landschaften” (1969) includes collages made of photos of snowy, barren plains that one understands as a sterile post-war landscape. Surgical instruments are glued on top, and the understanding of Nazi ideology-and the losses it incurred-as a mutated fusion of modernism and medicine, is equal parts prescient and crude. “Brunhilde and Her Fate” (1977), involves photos of Kiefer’s naked wife: close-ups of her breast that invoke both fragmentation and the wholeness associated with female fertility; and collages of her floating on a river, painted flames emanating from her body. The work echoes John Everett Millais’ 1852 work Ophelia, in which the female body is a site for the imminent return to nature, as endemic to the portrait.

Although Kiefer’s work as a young adult differs in scale from his mid-career gargantuan pieces, the books evidence certain continuities in material treatment and juxtaposition of saccharine and troubling imagery. “It is all there. The Kiefer we know today can be found all over the notebooks,” argues Lambert. “He has been making books since he was 18 and still makes them today. He is a man who adores books and literature; he has an enormous personal library, and a real, profound education.”

Kiefer’s incessant scribbling of “Genet” is a primitive prequel of his interrogation of the ways in which literature can permeate artworks. His work often references Paul Celan, Céline, and Ingeborg Bachmann, sometimes accessing their work just by allusion. Kiefer’s latest painting, finished two weeks ago, is the fourth of the series “Les Dormeurs du Val,” which are all adapted from Rimbaud’s 1870 poem of the same name.

And the artist has consistently deployed books formally, as a way to compact and stack information. His sculpture Breaking the Vessels (1990) is a 17-foot-high work in the shape of a bookcase, with entire books covered in lead. The pages become too heavy to turn and the entire object loses its original purpose. This piece, like his early notebooks, explores the place of the book as a symbolic container of knowledge, one that moves between transcendence and tangibility.

Likewise, the technique used to produce the books here evince similarities to Kiefer’s later treatment of canvas: it’s there, for the first time, he experiments with shellac, and covers book covers in thick material. Later, his grand paintings will be so covered, creating a contrast between a skin-like membrane and a heavy suffocating component. Throughout is negotiatiation of sculpture and painting.

And things that Kiefer has parted with? “It’s a shame he doesn’t do watercolors anymore, these were beautiful,” says Lambert. “But in the solitude of his studio, an artist does whatever he wants.”