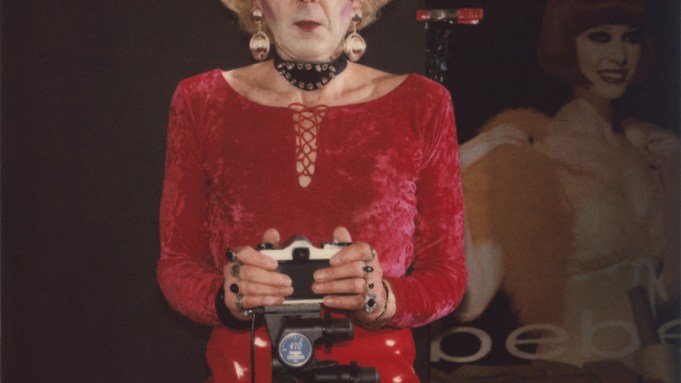 A few years ago I stumbled on a YouTube account in which a self-described cross-dresser named Joanie modeled bikinis, clubwear, and lingerie. The videos—more than two dozen of them—followed the same template: under two minutes, without sound, shot in an austere home office with beige carpet and particle board furniture. Joanie vamped and preened in a variety of wigs and outfits, sometimes coquettish, sometimes mannequinnish, sometimes with the unmoored look of a pageant girl who forgot her choreography mid-twirl.

I thought of Joanie recently while paging through April Dawn Alison (Mack, 2019), a new photobook that draws on the private archive of Alan Schaefer, a billboard photographer from Oakland, California, who, for thirty years, photographed himself at home as his female alter ego, April Dawn Alison. After Schaefer died in 2009, at age sixty-seven, all his Polaroids—numbering more than 9,200—were donated to the San Francisco Museum of Modern Art by a collector who had bought them from the estate. (An exhibition of the photos is on view at SFMOMA from July 6 to December 1.)

One of the book’s more striking sequences is a black-and-white quartet of April Dawn’s legs in high heels. The images have the chic brevity of fashion ads—Guy Bourdin on a budget. Other sequences are mock studio portraits in which a straitlaced April Dawn almost resembles Rosalynn Carter or late-career Joan Crawford. Still others capture her posed against a black backdrop or against discreetly closed drapes. A few show her on what appears to be her balcony, rare instances of April Dawn braving both the climate and prying eyes. Throughout, her project is self-aware and self-conscious, but in ways that are improvised and endearing rather than calculated and pretentious.

There have been other archives like April Dawn’s: in the 1960s and ’70s, the French photographer Pierre Molinier documented himself in fishnets and stilettos, enacting sadomasochistic tableaus; decades earlier, the composer and pianist Percy Grainger took photos of his own self-flagellation; writer William T. Vollmann’s The Book of Dolores (2013) is a diaristic chronicle of his experiments with drag. Cindy Sherman inevitably comes to mind, too, although April Dawn’s pictures are less elaborately staged. Indeed, they have a do-it-yourself charm in which whatever is at hand gets conscripted as a prop: a vacuum cleaner becomes a confidant, a balloon becomes a hard-on, a wineglass and a cigarette become shorthand for how to be sophisticated at home.

April Dawn Alison arguably has more in common with other vernacular photobooks such as Casa Susanna (2005), about a rural Catskills getaway for cross-dressers in the 1950s and ’60s, and, to a lesser extent, Dressing for Pleasure (2010), which collects amateur photos of leather and vinyl fetishists. As in these books, some of the frisson in April Dawn Alison comes from looking at images that were previously taboo and that put their subject at risk, personally and professionally. However, neither of these books evokes quite the same juxtaposition of eroticism and domestic banality as April Dawn Alison. The lamps, carpets, drapes, electrical outlets, framed family photos, and vague bric-a-brac in the background of April Dawn’s photos stand in poignant contrast to her own theatrical self-presentation in a bra and panties, spread-eagled on the floor, or chained to a sink, or suspended in a doorway with a blindfold and a ball gag.

For all of their conceptual brio, there’s not much escapism in April Dawn’s photos; they occupy that smudged borderline where life and art merge. One gets the sense that photography was an extension of April Dawn’s female identity, not merely a representation of it. Her images are as much a performance of femininity in its various permutations as a memoir of her own self-transformation. April Dawn looks into the camera more often than not, sometimes in a wig but no makeup, at other times painted with almost Kabuki flamboyance. In one image, she wears a white skirt, a plaid ruffle shirt, and sensible red pumps, kneeling next to, and half-embracing, a vacuum cleaner with a bag the same robin’s-egg blue as her eyeshadow. Maybe the image is a spoof of catalogue models or suburban ennui. Maybe it’s just April Dawn taking a hammy break from housecleaning.

Such uncertainty is part of what makes the book so intriguing. I don’t know what purpose April Dawn’s photos served her; they may have been sexual mementos, artistic statements, or documentary inventories for her own amusement. And I don’t know who April Dawn imagined as her viewer. When I first looked through the book, I felt a kind of queasiness at the idea that these images are now public, bound in a book and hung on museum walls. Surely Schaefer never intended his solo rituals to be so scrutinized. But the more I considered the images, the more I realized that probably wasn’t true. As SFMOMA curator Erin O’Toole writes in the book’s introduction, a handwritten label was affixed to one of Schaefer’s boxes of Polaroids that read APRIL DAWN AVEDON. Although likely meant in jest, the reference to Richard Avedon suggests the spirit of April Dawn’s artistic pursuits, and the grandeur of her ambition. Several of April Dawn’s photos feature her regarding other Polaroids of herself, or her primping in mirrors—a self-referentiality that pushes the project beyond casual home snapshots into something richer and more complex. There’s a tension between voyeurism and exhibitionism in April Dawn’s archive, and the aftertaste of contraband, which the Polaroid format only intensifies.

The book’s final sequences show an aged April Dawn posing with her closest collaborators: a camera and a tripod. These images dissolve any notions of fantasy. Here is the artist behind-the-scenes, no longer an erotic cipher or a wily persona ransacking her closet. She may as well be naked. For three decades, the camera was the sole witness to her metamorphoses, and here she shares the frame with it, regarding her hypothetical viewers with inscrutable expressions: pride, defiance, bewilderment, seduction, perhaps regret that her own beauty had to remain unseen as long as she lived. But beauty has a funny way of enduring.