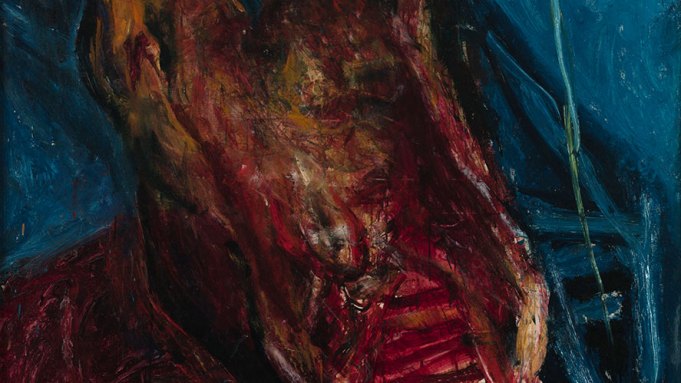 “Chaim Soutine: Flesh,” on view through September 16 at the Jewish Museum in New York, collects thirty-two still lifes, several depicting dead animals, a subject that fascinated the Jewish, Lithuania-born expressionist. (For a period of time, he hung the carcasses of cows in his Paris studio.) Here we look back in A.i.A’s archives to our April 1984 issue, in which novelist and filmmaker Gary Indiana argued that Soutine was a modern master “not in spite of his formal weakness but because of them.” Interestingly, he notes that the painter’s “still lifes depict foods forbidden him by Jewish dietary laws and severe stomach ulcers.” Perhaps that explains their electric colors. We present Indiana’s essay, written with his signature verve, seriousness, and acid humor, in full below. —Eds.

Soutine looks more formidable now than he did in 1950, when Clement Greenberg criticized his lack of decorativeness. With the return of figurative expressionism, we’ve learned to enjoy representation on whatever terms it’s offered, even if its elements never quite add up to masterpieces: trees, flowers, cows, plates of dead fish, and narrative have all pirouetted back into the public eye like the chorus of some improbably revived musical comedy written for Deanna Durbin but performed by Dolly Parton. Marx and Nietzsche would both have known what to think about the ’80s rehabilitation of recently discarded styles; as the literature promoting it clearly shows, we don’t. But this is our problem, not Soutine’s. “Mr. Kurtz, he daid.”

Greenberg was right about Soutine. A recent, ambitious retrospective of works at Galleri Bellman provided an unexpected opportunity to correct one’s memory of paintings normally viewed singly in museums; Soutine in bulk is full of surprises, but brilliant resolution isn’t one of them. Look at the way Street at Cagnes (1924) drags everything along a swirling helix, bending the landscape like a taper, piling its mass at an implausible summit with a failed velocity that makes the whole canvas top-heavy. Or the diagonal drop taken by all the carefully carved planes of House at Céret and A Day at Beaulieu (1920). Some extrapictorial drama is working itself out on the pretext of making a picture, and while the surface result really does deserve the word “stunning,” it never leads us far enough from the thought that “stunning” may also describe the effect of a blunt object striking one’s occipital lobes.

On the other hand, these are landscapes. One is moved to fault them in formal terms because landscape is the painting genre most thoroughly appropriated by photography—the most fitting, really, since it has the least taint of the human. We expect landscapes to conform compositionally to organic patterns, for their painterly expressiveness to restrict itself to color and drawing nuances. There is something unseemly and adolescent, today, about bending what little remains of nature to the whim of “artistic genius”: contemporary landscape painting tends to respect the “formal naturalness” of the snapshot.

Of still life and portraiture, Greenberg’s criticism seems less relevant. In these areas, Soutine is the quintessential modern master, not in spite of his formal weaknesses but because of them. Soutine translated subjects rummaged from Chardin and Corot into a violent, flashily hewn style that owes little to his immediate contemporaries. One reason his paintings still seem fresh and peculiar is that Soutine never adhered to, hardly even dallied with, any of the Art Isms flying around Europe in his time. He roomed with Chagall, but only one painting in the recent show looks remotely Chagall-like, The Hare (1926), and that only because the evening blue in it is more a Chagall than a Soutine blue. Viewing Soutine’s portraits of the late ’20s and early ’30s, one does think of Modigliani, with whom Soutine shared a serious alcohol problem (and from whose social influence Soutine had struggled to extricate himself during their friendship). The catalogue essays for the show anxiously stress the complete difference between the two painters. Their styles are almost antithetical (ignoring their shared addiction to red as an emotive signature color), but both were obsessed with the isolated human figure and with the production of a certain pathos.

It’s been noted that Soutine’s still lifes depict foods forbidden him by Jewish dietary laws and severe stomach ulcers, the spectacular example being the unkosher, bloodily indigestible Carcass of Beef (1925). In his portraits, Soutine breaks different taboos. Nearly all his subjects are captured in antisocial, nonportraitlike attitudes. Some look as though the painter had rudely yanked them from a private meditation; some are asleep; others are just plain sullen or downright goofy—defying the intrusion of the artist or mocking his seriousness. Many appear to have relinquished consciousness altogether, and in their handling these pictures bring Francis Bacon’s work strongly to mind. Most of Soutine’s portrait subjects, however, struggle with a fathomless personal sorrow. They wear masks of skepticism and petulance, but this is makeup dusted over intense discomfort. Even the dead animal and vegetable presences in Soutine’s still lifes look distressed, flustered at being painted, anxious to get on with their private decomposition.

This resistance of the subject is overcome in Soutine’s late canvases. The landscapes disport themselves in compliant intricacy and no longer want to spill off the lower edges of the canvas or gush out through the top. The figures plant themselves obediently center frame, eager to look the way the artist wishes them to, intent on the business of that moment. They look neither backward or inward nor ahead. The pathos of the gaze is shifted to the empty tension of holding the pose. In these paintings of the early ’40s, the sitters’ willingness to please provided Soutine with a richer, dramatically final morphology of desperation.

The 25 Most Expensive Homes in the World for Sale

Lizzo at People’s Choice Awards: ‘If I’m the People’s Champ, I Don’t Need a Trophy for Championing People’