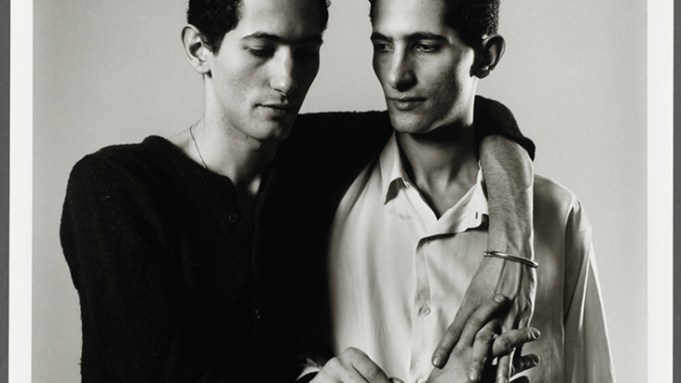 “Peter Hujar: Speed of Life,” on view through May 20 at the Morgan Library and Museum in New York, collects a hundred and sixty-four pictures that the enigmatic American photographer, who died of AIDS-related pneumonia in 1987, made from the mid-1950s onward. Here we look back in A.i.A’s archives to our September 1990 issue, in which art historian David Joselit considered the “postcoital” affect of Hujar’s portraits. Joselit argues that Hujar depicts individuals basking in the intimacy and uncertainty that follows the contest between photographer and subject. In this the artist differed markedly from his contemporaries Richard Avedon and Robert Mapplethorpe, who masked the anxiety the interaction by presenting erect, phallic figures in classical frames. “Hujar’s subjects,” Joselit writes, “are relaxed, supine, even flaccid. They have been seduced rather than bullied into submission, and they seem to inhabit an eroticized space of rest.” We present his essay, which combines a Foucauldian analysis of sexuality with an aesthete’s sensitivity towards mood and gesture, in full below. —Eds.

Any portrait photograph is the material trace of a lived-through transaction between photographer and subject. But the relationship between these two protagonists—the one behind and the other in front of the camera—is typically predicated on an uneven distribution of power. The subject is made to pose and perform like a marionette as the photographer brings him or her into pictorial existence. No one has revealed this dynamic as unapologetically as Richard Avedon:

I am close enough to touch the subject and there is nothing between us except what happens as we observe one another during the making of the portrait. This exchange involves manipulations, submissions. Assumptions are reached and acted upon that could seldom be made with impunity in ordinary life.1

The type of submission Avedon demands is not inconsequential: his subjects become the photographer’s pliable matter and give up the prerogative of an independently fashioned self-image.2 This process is not easy for either the photographer or the subject, nor is it meant to be. In order for the act of submission—which is what the photograph finally represents and records—to have meaning, it must be the result of a genuine struggle. As Avedon puts it, “We have separate ambitions for the image. His need to plead his case probably goes as deep as my need to plead mine, but the control is with me.”3 The moment of submission is imagined lovingly, almost erotically, by the photographer: “As the sitting goes on, he begins to understand what I am responding to in him and finds his own way of dealing with that knowledge.”4

In most portrait photographs—certainly those of Richard Avedon—this originary moment of submission to the photographer, of pleasing him, is masked by the paradoxical illusion of the subject’s power and independence which the final portrait usually projects. Even in his recent pictures of randomly encountered inhabitants of the American West, Avedon’s subjects tend to be erect and powerful. By contrast, the portraits of Peter Hujar are extraordinary in their refusal to mask the moment of giving in. As demonstrated in the recent survey of his work at the Grey Art Gallery, Hujar’s subjects are relaxed, supine, even flaccid. They have been seduced rather than bullied into submission, and they seem to inhabit an eroticized space of rest.

Although he worked from the mid-‘50s until 1973 as a commercial photographer, carrying out many fashion assignments for Harper’s Bazaar, until his death from AIDS in 1987, Hujar enjoyed an underground reputation as a chronicler of New York’s lively downtown scene of the ‘70s and early ‘80s. He photographed anonymous acquaintances as well as rock stars, celebrities like his close friend Fran Lebowitz and drag queens Candy Darling and Divine. Because a great proportion of Hujar’s work portrays friends or acquaintances in the gay subculture, it is almost inevitably compared with Robert Mapplethorpe’s photography. Recently, Andy Grundberg’s New York Times review of the Grey Art Gallery exhibition carried the headline “Photos by Peter Hujar, a Mapplethorpe Precursor,” and in the text Grundberg remarked:

Like Mapplethorpe, Hujar photographed handsome men without their clothes, as well as men made up and dressed as women. But Hujar’s depictions of gay desire are without the distilled eroticism of Mapplethorpe’s most notorious images. Instead, they seem warm, sensitive and . . . frequently humorous.5

This comparison is both useful and potentially misleading. While on the surface it betrays a simplistic assumption that gay photographers who depict handsome undressed men automatically constitute a group or a school—a notion that Grundberg himself admits “seems strained”—it also opens up the possibility of a more productive analysis. Whereas Mapplethorpe literally molds the body—the object of desire—into a sculptural hieroglyph in which phallic aggression is concentrated like a tightened spring within a cold, classical frame, Hujar’s subjects manifest more amorphous qualities: they sprawl, slouch or dream. What both artists do share is the practice of explicitly sexualizing, albeit in very different ways, the drama of submission that underlies any photograph of a human subject.

In his analyses of ethical codes among the ancient Greeks, Michel Foucault suggested a sexual dichotomy in many ways more useful than our usual distinction between male and female or homosexual and heterosexual. He proposes that it “was the opposition between activity and passivity that was essential, pervading the domain of sexual behaviors and that of moral behaviors as well.”6 If, as Foucault suggests, any sexual relation involves a drama of submission, then traditional roles like feminine or masculine should be considered as part of a larger sexual economy of activity and passivity, one which may well trespass across or supersede the lines of gender. Clearly, in homosexual behavior—given the absence of gender difference—the active/passive contest is more explicit and played for much higher stakes. This is strikingly clear in Mapplethorpe’s photographs, which visually freeze his “transactions” in the economy of submission into powerful phallic emblems—whether the nominal subject is a male body, a statue or a flower blossom. These images serve as fetishes which strive to mask the anxiety of the real submission they represent—the submission of the subject, who is often also the photographer’s object of desire.

Hujar’s pictures concentrate on a very different moment in the photographic economy of submission, a moment in which fascination is more operative than fear. Unlike Mapplethorpe’s erect, seemingly self-possessed subjects, Hujar’s are typically reclining and relaxed; their expressions often convey an intimate questioning or yearning. They appear to occupy an emotional state which Foucault describes as virtually postcoital:

In a civilization that for centuries considered the essence of the relation between two people to reside in the knowledge of whether one of the two parties was going to surrender to in the other, all the of interest and curiosity, the cunning and manipulation of people was aimed at getting the other to give in, to go to bed with them. Now when sexual encounters become extremely easy and numerous, as is the case with homosexuality nowadays, complications are only introduced after the fact. In this type of casual encounter it is only after making love that one becomes curious about the other person.7

While it would be misleading to apply Foucault’s proposition literally to Hujar’s work—especially given the widespread revision of gay sexual mores in light of AIDS—it does provide a clue to the special emotional force of his photographs. Unlike Mapplethorpe and the Avedon of In the American West, who mask the moment of intimacy which follows a struggle, Hujar enters into this moment and expands it. He captures his subject at a moment of simultaneous self-possession and other-directed interrogation. In his portrait of Divine, for instance, this brassiest of foul-mouthed drag queens occupies a new unfamiliar space for the viewer. Dressed as a man, Divine reclines with head supported by a bent arm and eyes and mouth only slightly open. What is surprising and moving in this photograph is that even in the absence of his/her public persona—without the tight dress, stiletto heels and bouffant hairdo—Divine maintains an irreducible residue of selfhood. She/he has survived the stripping away of an elaborate and seemingly impermeable social shell. In nearly all of his portraits, and not only of those sitters who are famous or notorious, Hujar wears away the layers of the public self, as though compelled to discover what lies underneath. What remains in Divine’s portrait is a glimpse of an unformed region between active and passive, and between male and female.

In the haunting photograph titled Nude Man, Hujar suggests a more alienated relationship between sexual activity and passivity. Here we see a naked man leaning back in a chair, his erect penis rising from between his splayed legs. His eyes are closed and his mouth is open as though the wind has been knocked out of him. It is almost as if his deflated, lifeless form were impaled on his own aggressive erection. In this image Hujar imagines the penis as a murderous weapon, and this uneasy mingling of death and sexuality provides a striking counterpoint to the implied petit mort of his “postcoital” portraits.8 Hujar’s well-known pictures of the skeletal remains found in the Palermo catacombs give a final twist to his exploration of the relation between activity and passivity, and life and death. These images invert the terms of the portraits: whereas Divine’s social armor is stripped away to bare a human residue, in the catacomb photographs it is the body itself which erodes, leaving ornate burial costumes mockingly intact around grotesque, desiccated skeletons.

All of Hujar’s photographs, in fact, operate within an economy of sexualized activity and passivity whose poles might be represented by the hyperaggressive, murderous phallus and the decomposing corpse. These extremes, and the points that connect them, describe the trajectory of what was for Hujar a single photographic project. The critic Vince Aletti has said, “There was a real acceptance in Peter of the connection between life and death. He felt that there was this continuum and it wasn’t something that he ever stopped thinking about.”9 Hujar’s determination to chart, photographically, the continuum that he found joining life and death, domination and submission, and masculinity and femininity yielded a body of work whose insights have just begun to be explored.

2. Avedon has claimed that he regards the photographs of In the American West as self-portraits.

3. Avedon, foreword to In the American West.

8. I believe that a violence perceived to be inherent to the phallus is central to Mapplethorpe’s imagery as well. However, his pictures—even the sadomasochistic images—typically transform aggression into an emblem in a way that Hujar’s photographs do not. See my essay “Robert Mapplethorpe’s Poses,” in Janet Kardon, ed., Robert Mapplethorpe: The Perfect Moment, Philadelphia, Institute of Contemporary Art, 1988.

9. “Interview with Vince Aletti,” by Thomas Sokolowski. Unpaginated, prepublication manuscript of the grey Art Gallery’s catalogue of the Hujar exhibition.