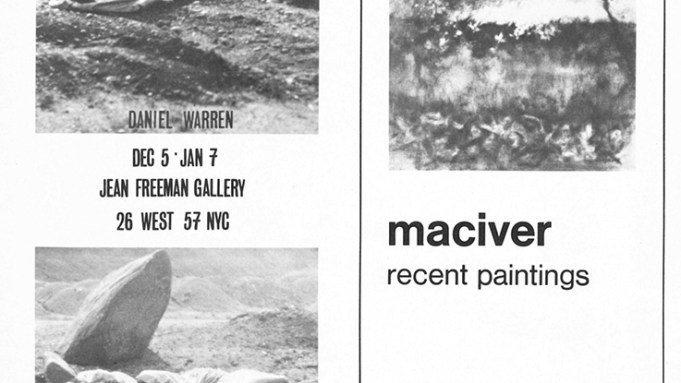 In The Jean Freeman Gallery Does Not Exist (MIT Press, 2018), art historian Christopher Howard recounts how, from the summer of 1970 to March 1971, Terry Fugate-Wilcox ran ads for a nonexistent gallery in A.i.A., ARTnews, Artforum, and Arts Magazine. He took photographs and doctored images in order to present them as documentation of Land art and ephemeral Conceptual works by the fictional artists in Jean Freeman’s stable; he even published an essay on these characters in the March 1971 issue of Arts. Fugate-Wilcox subsequently described his project as a “parody” of the New York art world, which had transformed from the small community of artists it had been in the ’50s to a big business powered by advertising and hype. But, in the final chapter of the book, Howard refutes the artist’s dismissal of his own work. The Jean Freeman ads appeared at a time when a number of artists—including Dan Graham, Ray Johnson, and Judy Chicago—were using the pages of magazines (including ad space) to make artistic statements. It was a part of a larger reckoning with the growing role that reproductions and rumor played in making artistic reputations.

As Andrew Russeth notes in a review for ARTnews, Howard’s book painstakingly lays out the rich context in which Fugate-Wilcox conceived his project. He not only describes the rise of Land art and Conceptualism, but also provides abundant details about the publishing scene in the 1960s and early 1970s, including circulation numbers and ad prices at the big art magazines. Fugate-Wilcox never paid in full for the Jean Freeman ads. It seems likely that the publishers indulged him because his project flattered their sense of their own importance. In March 1972, Howard writes, Fugate-Wilcox appeared on “The Today Show” with Brian O’Doherty, then the editor of A.i.A. as well as a reporter for NBC television; O’Doherty announced that the magazine had forgiven Fugate-Wilcox’s debt. The TV spot coincided with the publication of an Issues & Commentary column in our March–April 1972 issue, in which Nancy Foote offered a postmortem analysis of the Jean Freeman project. We publish her article in full below. —Eds.

In the fall of 1970 a press release was issued announcing the opening of the Jean Freeman Gallery. Located at 26 West 57th Street and directed by Niesus Stacion, the gallery planned a series of exhibitions of contemporary sculpture. The September issue of the major art magazines carried advertisements for the first group show, and a subsequent press release described the exhibition as documenting Daniel Warren’s plastic decoration series, Michael O’Day’s wind-and-rain sculpture, and Gary Palestine’s social-political land excavations. It also included works by Mike Bauer, Forest Strong, and Avery Drew. The gallery, it seemed, had an aquatic and elemental cast—in October, Idra, known for her 1968 Toronto game piece, held a one-woman show of her corporeal-incorporeal pieces and her continuing dolphin work. The November show, devoted to Justine Dane’s “involuntary participation beyond the gallery walls,” was followed in December by a five-year documentation of Daniel Warren’s work. O’Day’s show in January concentrated on his 1,000-mile-long gelatinous sculpture executed in the Pacific Ocean. He and Daniel Warren had both appeared in the first group show. All the shows, heralded with ads and press releases, were included in the gallery listings in Art News and the Art Gallery, and Gregory Battcock mentioned them in his New York letter for Art and Artists.

Those who tried to see the shows found the gallery inaccessible despite its address, for no number 26 exists on West 57th Street. For those who hadn’t tried, the first explanation of the enterprise appeared in the New York Times on Sunday, January 24, 1971. The gallery and its artists, Grace Glueck explained, were an invention of the artist Terry Fugate-Wilcox, whose own work had appeared in group shows at the Dwan Gallery, now defunct, across the street from Jean Freeman. He established the gallery at the nonexistent number by filing a change-of-address card at the post office, thereby routing all mail to his downtown loft. For several months he conducted the gallery’s business—answering the phone, receiving the mail, turning down requests from artists who wanted to exhibit, sending out press releases, and placing ads. He also wrote an article about three of his artists which was published in the March 1971 issue of Arts magazine. Entitled “Force Art: A New Direction,” it dealt with the works of Michael O’Day, Justine Dane, and Daniel Warren, and only mentioned the Jean Freeman Gallery once in passing. He defined force art as “a way of working with materials, objects, and elements at their source within their nature, not rearranging nature (for that is impossible) but recognizing and utilizing the basic elements of materials existing with nature as one.” The article contains an extended description of how O’Day created the 1,000-mile gelatin piece in the Atlantic Ocean, unrolling five 150-mile strips of gelatin at 50-mile intervals by means of a crane and winches attached to a catamaran. Although the piece lasted only seven hours (before dissolving into fish food), “the events have no end and no real beginning,” according to the artist. “Despite its endlessness,” Fugate-Wilcox commented, “very little remains of the gigantic sculpture.”

The gallery closed in March 1971; its last full-page ad consisted of an illegible signature. Fugate-Wilcox found that his checking account was entering the realm of the conceptual, having already paid out a total of $4,595.83 in expenses. On top of this, he still owes nearly $8,000 for ads, including $2,956.59 to this magazine. The gallery is now for sale as a signed work of art—the price is $12,563.57, the total cost of the project.

Fugate-Wilcox says that he had been building up to the project for several years, and that his purpose was to “expose the structure of the gallery world.” “You can’t help but get a good look inside yourself when you realize you’ve gone along with it.” The success of the enterprise is attested to by the people who went along with him. All the magazines continued to publish his ads for six months, despite the fact that they were never paid.

The scope of the gallery’s activities was not limited to the media and the art lovers. That indispensable scholarly tool, the Art Index, not only indexed the reviews of several of the artists’ shows, but also succeeded in mistaking the advertisements for editorial material, listing promotion photos of the work of Dane, O’Day, and Warren as illustrations.

As a stunt that rips off everyone involved, the Jean Freeman Gallery is very clever. Those who only read the ads and announcements without realizing they were anything out of the ordinary unwittingly proved Fugate-­Wilcox’s theories about the gallery scene. (The same can be said for those who attended an after-opening reception for Justine Dane, held at 141 Prince Street, without ever realizing that she wasn’t there.) As a comment on the art magazines it makes its point also. As a conceptual work of art it exists as a fully documented process piece in the form of notices in magazines, press releases, ads, and a filing cabinet full of the usual gallery correspondence—applications, requests for shows, photos, catalogues, and tapes of conversations between the gallery director and those who managed to reach him by phone. Phantom galleries have been dreamed up previously, but not documented. However, though the gallery itself can be labeled as a documented conceptual work, it has hatched in the course of its evolution several elements which go beyond this. Like a picture on a package of a person holding a package with a picture of a person holding a package, it triggers a chain reaction of “conceptuals” within itself, raising some interesting questions as to the nature and structure of conceptualism on the way. First of all, Fugate-Wilcox conceives of his artists, thereby redefining the term “conceptual artist.” Instead of being an artist who conceives of projects, he is now an artist who is conceived of by an artist, thereby serving as both work of art and creator of the pieces which form the next link of the chain.

Since Fugate-Wilcox’s artists exist only as concepts, it follows that their art will exhibit similar characteristics. A process piece executed by such an artist does not result in any documentation, though it is true that the Jean Freeman Gallery did provide a few vaguely suggestive photos to lend credence to their ads. This conceptualization of process frees the artist from any need to produce documentation, and thus removes any restrictions imposed by actually having to do the thing conceived of, whether it is dyeing a river red or letting a roach crawl around one’s belly button. Only under these ideal conditions is it possible to take full advantage of the media used by Fugate-Wilcox’s artists—wind, rain, lightning, the Pacific Ocean.

The last press release, which appeared about the same time as the ad with the signature, carried Terry Fugate­-Wilcox’s name in place of an imaginary artist’s, and read: “26 West 57th Street does not exist.” The gallery, however, does exist—as a process piece which, if taken seriously, pretty much wraps up conceptualism.