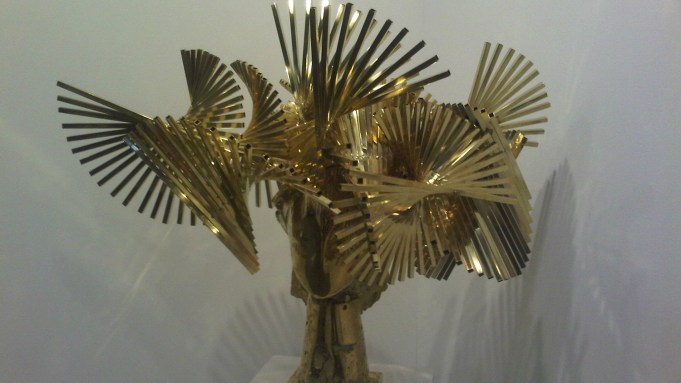 At last week’s ARCO, Spain’s highest profile art fair, dealers complained about subzero conditions in the large halls of the convention center on the outskirts of Madrid. Randi Thommessen of Lautom Contemporary of Oslo said the cold compared with her home country, but she was well prepared, pointing to her fleece coat.

British architect Norman Foster seemed not to feel the chill as he helped his wife Elena erect the booth for Ivorypress her gallery-slash-publishing house. “I’m not really part of the team,” he told A.i.A. “but it’s great to see an art fair and the different booths slowly come to life during the day before the opening.” He proudly pitched me ceramics by Ai Weiwei and an installation by the Cuban artist-duo Los Carpinteros. Undoubtedly, enlisting Foster as sales staff is a smart move. “There are three ways to start a gallery, and one is network-based,” Victor Gisler of Zürich gallery Mai 36 told me, as I filled in the other two-hard work and money.

An hour into the VIP preview Don and Mera Rubell posed a for photo in front of an early purchase, Secundino Hernández’s large-scale abstract painting Wimbledon (2011), at the booth of Frankfurt’s Bärbel Grässlin. Two days later the collector couple were spotted eying paintings by young Polish artist Mateusz SzczypiÅ?ski at the booth of Warsaw gallery lokal_30, as part of the fair’s strongest section, Opening. Among its 22 participants, the section, dedicated to young galleries, included five of this year’s Art Basel Statements participants: Lautom Contemporary (Oslo), Cherry and Martin (LA), Arratia Beer, Peres Projects, and Tanya Leighton (all Berlin). No Spanish galleries were among them.

However, all of Spain’s big guns took part in the main section, including Helga de Alvear and Elba Benítez. The booth of Barcelona’s ProjectSD, which sold out works of Basque artist Asier Mendizabal in the first few hours, stood out.

On the second day, Spain’s Crown Prince Filipe and his wife Princess Letizia were eagerly greeted by dealers, including Martin van Zomeren (Amsterdam), who stood at his booth waiting to give the royal couple We Share Air (2006) a limited edition button-badge by Rotterdam-based artist Navid Nuur. His Royal Highness stopped before the 2012 collage Silence Is Golden, But This Is No Silence by young Dutch artist Sarah van Sonsbeeck at the booth of Annet Gelink (Amsterdam). Both galleries were part of the Focus section, for which ARCO invited 16 Dutch galleries to enjoy a free booth, a measure the fair has implemented to attract new participants.

Many gallerists used ARCO as a networking platform to connect with museum directors, curators and other art institutions. Jean-Michel Botquin of Liege-based gallery Nadja Vilenne was excited about the impending sale of Aglaia Konrad’s Desert Cities (2012); and the sale of Robert Mangold’s Tilted Grey Eclipse / Brown Frame (1990) was awaiting confirmation for well over $700,000 at the booth of Belgian dealer André Simoens.

Popcaan Throws a Blessed Up Party On ‘Great Is He’

Wondering What To Watch This Weekend? How About a Show With Jason Segel and Harrison Ford?