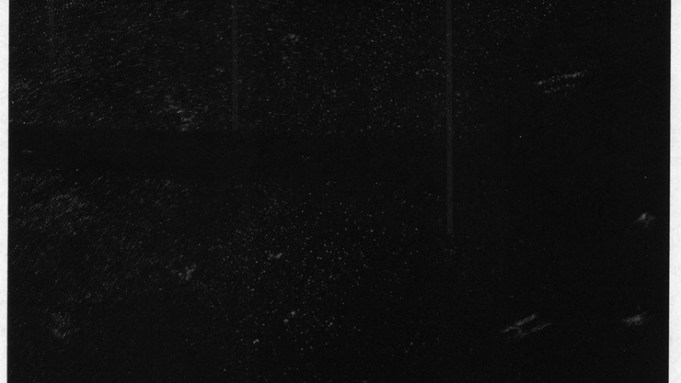 In his first U.S. solo exhibitions since his mid-career retrospective at the Berkeley Art Museum in 2009, Ari Marcopoulos presents a new body of photographs and prints at Ratio3 in San Francisco, as well as a limited edition skateboard deck with one of his images screen-printed on it [through Oct. 22]. A new suite of black-and-white prints featuring Warhol’s iconic Marilyn portrait with one of Marcopoulos’s photos of graffiti printed over it shows concurrently at SF’s Gallery 16.

Marcopoulos’s new work (all 2011) features images ranging from portraits and figurative work to abstracts and street scenes of New York; he returned to the city in 2010 after fourteen years living in Northern California. There is a grittiness, a moodiness, a harshness to the images that stands in contrast to brighter and gentler works made in the past, such as those featuring his young sons in California or snowboarders carving up mountains. “I don’t take photos for aesthetic reasons or composition reasons,” Marcopoulos told A.i.A. “My photographs are really a translation of what I see in front of me; what I notice.”

Marcopoulos began his career more than thirty years ago when he moved from his native Holland to New York, where he started out photographing for Andy Warhol. While Marcopoulos is best known for his portraits and documentation of pop culture, it’s the accessibility, immediacy and rawness of his subjects and subject matter that is striking about his work, not unlike early street photographers such as Walker Evans, Garry Winogrand, and Robert Frank. Since ’09, Marcopoulos has also been included in the 2010 Whitney Biennial (his second appearance there; the first in 2002), and a massive monograph of his work was published by Rizzoli earlier this year (about two inches thick, it features roughly 1,200 images printed on newsprint).

The portraits at Ratio3 are captivating. In Mask, a woman with shaved head and blue tape across her nose stares down the camera with unwavering intensity. But it’s three black-on-white, large-scale abstract (or, rather, obscured) prints here that particularly stand out. For these, Marcopoulos layered black-and-white images-he’d printed images over images on the same piece of paper in a regular office printer, and then had those scanned and printed, large-scale (90 by 60 inches), two, three, four times over on the same piece of paper. “I’m trying to evoke an experience in the viewer that goes beyond just looking at a photograph that tells you what you should feel or what you’re looking at,” says Marcopoulos.

One of these abstracted works, #5, is completely black-the abundance of image becoming the absence of image, which now is the image—save the top corner, which shows that the paper got folded over, an accidental happening when the original was running through the printer; it speaks to the process. The other two works of this kind, #9 and #3, feature moiré patterns as well as heavy moments of black. Hints of a figure can be seen in one. The enormous amount of ink and overprinting create texture and the layering gives depth, but very subtly. “I’m interested in printing,” Marcopoulos says. “I think about all photographs I’ve ever taken and how they would lead to a very dense black rectangle. They are still photographs, and they are an exercise in printmaking.”

The intensity and obscurity of the large prints is balanced by the more straightforward images—such as Touch, a poetic glance through a window with a prosthetic hand on the sill; 194, a figurative image of a woman from the back with arms stretched above her head; and Canal, a dark black-and-white scene of a muddy tile floor.

Then there’s Infiltration, the most poignant counterpoint to the prints; made of thirty-three individually framed, 10-by-7.25-inch black-and-white photocopy-on-newsprint pieces-including two of the originals that were scanned to make the large prints as well as images of people, drawings by Marcopoulos, a dead rabbit-it identifies the source of the larger works. And, it and the prints are simply two representations of how images can be presented: layered or laid side by side. “The prints are the same as the other pictures,” says Marcopoulos, “except they are on top of each other, so it becomes something different.”

Athletics Departments Should Take Charge of Name, Image and Likeness