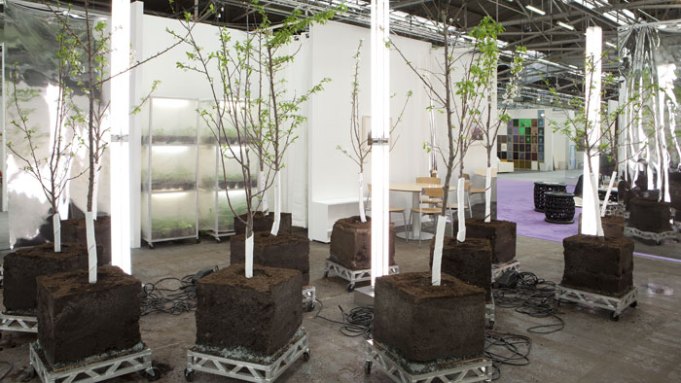 Theaster Gates “has a crazy following,” said Peter Skvara, of Chicago’s Kavi Gupta gallery. Even before the Armory Show’s official opening yesterday, all but one of the artist’s 11 pieces in the compact booth had sold, along with two in the back room. The pieces include “thrones” made from old shoeshine chairs, and sculptures comprising materials Gates has gutted from buildings and cast in cement blocks. They range in price from $18,000–30,000. The Brooklyn Museum got in on the action, acquiring In the Event of Race Riot II (2011), a fire hose coiled inside a glass case.

The Armory seems poised to do well this year, following the recently buoyant London auctions and an art market that, at some levels, defies broader negative economic trends. Last year the fair reported 60,000 visitors, 56 percent of whom came from outside New York City, and over one-third from other countries. Located again on Piers 92 and 94, the Armory runs through Sunday. Between the original contemporary fair and its Modern offspring, there are 275 exhibitors, including a special section devoted to Latin American galleries that adds nice variety to the mix.

But a lot of people, speaking off the record, have been down on the Armory since last year. The once scrappy downtown fair that started in the once scrappy Gramercy Park Hotel has become the fair that everyone loves to hate. Depending on who you ask, that might have something to do with its godforsaken location, its lack of identity or its endless disorienting rows of booths-or the fact that it was bought, in 2007, by Merchandise Mart Properties, which mounts 300 trade shows per year, ranging from gift and furniture shows to the lackluster Art Chicago.

Then there’s the fair fatigue and visual overload, which isn’t helped by the fact that there is so much to see in so short a time. As dealer Alexander Grey puts it, “My dream fair would have 30 galleries.” And that’s exactly what some of the newer fairs are offering. In fact, the buzz at the Armory was the Independent, launched last year by dealer Elizabeth Dee and Darren Flook of London’s Hotel gallery. It kicks off tonight in the former Dia building in Chelsea.

Instead of gossip about who didn’t make it in to the prestigious Armory, the talk this year is about who opted out. Some major names have decamped for other fairs (David Zwirner, Pace, Emmanuel Perrotin), leaving room for smaller, younger galleries-which, after all, is what the fair was originally about.

Art advisor and former dealer Stefano Basilico, admiring an acid green gouache by Sigmar Polke at Galleri Bo Bjerggaard of Copenhagen, described the fair as “cacophonous.” Art Basel is just as large, he observed, but the booths are typically larger, the aisles wider and the exhibitors pack less in.

One exhibitor that cut down on the visual clutter was Paul Kasmin. Both alluring and repelling, the gallery’s booth was a non-booth. Kasmin turned its space over to Chilean artist Iván Navarro, who surrounded the unadorned area with a white neon fence. Inspired by Robert Barry’s 1969 show at Sperone Westwater in Turin, which consisted solely of a “Closed” sign on the gallery’s facade, Navarro’s The Armory Fence can be bought in its entirety for $360,000, or in 7-foot segments that go for $40,000. “It’s like an editioned work,” says the gallery’s Hayden Dunbar, who noted that in addition to the 25 meters of fence in the Armory piece, “there’s another 75 meters that can be sold in varying quantities.” Navarro’s exhibition of neon-and-mirror works opens on Friday at Kasmin’s Chelsea location.

Solo shows help stave off the glazing-over caused by too much looking. CRG is smartly displaying large-scale watercolor and pencil drawings by Cleveland native Steven Bindernagel. (Installation illustrated below.) The colorful compositions are a mash-up of references, ranging from architecture to crystals. During the preview, two had sold for $12,000 each, two were on reserve and a handful of smaller pieces had sold for $3,500 each. Small unframed works can still be had for a bargain $1,000. In 2012, Bindernagel will have his first show with CRG, which recently relocated to a street-level space in the former Dia building.

Ronald Feldman devoted its booth to a veritable greenhouse by Sam Van Aken. The artist has grafted various trees and plants together to create strange hybrids: for instance, a tree that might be able to grow peaches, plums, cherries, nectarines and apricots. Thirteen of these creations are on view, priced $5,000–12,000. So far one buyer had enough confidence in his green thumb to take a chance.

Over (or up, if you take the rickety-looking temporary stairs) at the Modern section of the Armory—which arguably increases the Armory’s lack of identity—the atmosphere is decidedly mellower, even staid. It’s definitely the place to go if you want to take a breather, as opposed to the jam-packed lounge for the seemingly countless VIPs. And take my advice: bring your own water and snacks.

But that’s not to say that there isn’t a lot of great work to be found there. The pier is nominally “modern.” Many contemporary artists can be found here too. At DC Moore, a 54-piece work from 2006 by Whitfield Lovell, consisting of portrait drawings and playing cards, priced over $275,000, had already been placed on reserve by an institution. Lovell will be included in “Never the Same Twice,” a group show at the gallery of artists who work in multiples, opening Mar. 17.

Also on offer at DC Moore is a selection of paintings by visionary painter Charles Burchfield, whose market continues to grow, boosted by the traveling survey curated by Robert Gober and which originated at the Hammer. According to Bridget Moore, “there’s a new group of collectors who have discovered him.” Priced $100,000 and up, one of six works had sold. The gallery now also represents the estate of Abstract Expressionist Robert de Niro, Sr., and has three colorful canvases ranging from $40,000 to $65,000.

Edward Tyler Nahem, which has been beefing up its contemporary program over the past few years, had sold a large “collage painting” by Erik Benson for $30,000. Benson makes his painstakingly detailed scenes by pouring paint onto glass, letting it dry, and then cutting it into various elements, such as bricks or construction fencing, and collaging them onto the canvas. Smaller works in the back room are going for $3,000–17,000. Benson, who, like Iván Navarro, used to show at the defunct Williamsburg gallery Roebling Hall, will have his first show with Nahem in September.

Benjamin Godsill, curatorial associate at the New Museum, enjoyed Gabriel Kuri’s works at Esther Schipper (Berlin) and Franco Noeri (Turin), particularly the artist’s “light touch that makes you focus on things you might otherwise miss.” It’s a quality he used to describe this year’s fair in general: “There are more small works, not slight but intimate.”

Overall, the consensus seems to be, as Godsill put it, “I haven’t been hit over the head by anything or anyone.”