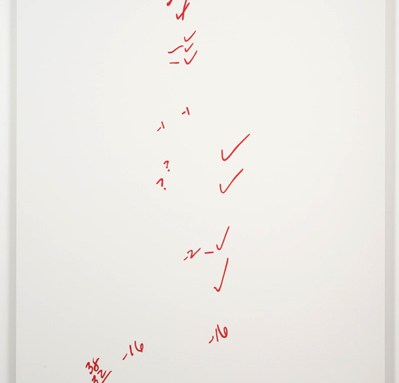 Despite being, according to the New York Times, “the most aristocratic bohemian on New York’s contemporary art scene,” Clarissa Dalrymple, curator-about-town, occasional art advisor and eternal champion of young artists, kept a relatively low profile at yesterday’s Armory show preview. There was a bit of the requisite cheek-kissing and non-committal chats about upcoming parties, but for the most part Dalrymple, casually dressed in a loose-fitting black top, pea coat and flats, focused on the art, darting in and out of booths and checking her scribbled-over map to make sure she didn’t miss anything.

Read on to see which artists caught her eye among those showing in the 100-odd galleries set up in this year’s contemporary pier. Soon after we met, Dalrymple made a beeline for London’s Pilar Corrias, pointing out a large black-and-white piece by Philippe Parreno. On a wall to the left was a smattering of small paintings by Tala Madani, an Iranian-American artist Dalrymple came across several years ago when Madani was an MFA student at Yale. “I’ll always have a soft spot for her,” she said.

At Hales Gallery, also from London, Dalrymple was especially taken by a dense abstract painting by the Guyanese-born British artist Frank Bowling. Afterwards, we stopped into Zach Feuer’s narrow, neatly installed booth. The New York dealer was showing four artists, among them Kate Levant, whose sculpture, made from materials scavenged from an abandoned home in Detroit, Dalrymple remembered seeing in the Whitney Biennial. Here Feuer installed a row of layered, mixed-medium wall works that looked to be constructed from similarly discarded materials (cardboard, paper, plastic, etc.).

Over at L.A.’s Cherry and Martin, Dalrymple zeroed in on an acrylic and gesso painting by Amanda Ross-Ho. We noted that this work, a large white canvas marred with a few red checks, question marks and numbers, was more pared-down than Ross-Ho’s typical collaged canvases and installations. We learned that the work is from the artist’s ongoing “Correction” series, based on childhood school papers. (That explains the odd date range: 1981–2010.)

Next door was a joint effort by New York galleries Nyehaus and Loretta Howard. A few videos on small, wall-mounted monitors stood out amidst the crowded booth: intimate portraits of the young Andy Warhol, Robert Rauschenberg, Larry Rivers and Claes Oldenburg at work in their studios by James Salter, better known as a novelist. “It’s an absolutely unknown aspect of a writer I admire, and it’s fantastic to see his exploration of then young artists he found special enough to record. I’d love to see these in 16mm, though,” Dalrymple observed.

KS Art’s Kerry Schuss, who specializes in Outsider art, brought a dozen or so tiny pencil drawings by the late British artist Tom Fairs (1925–2007). Fairs lived in Hampstead, and his drawings were all scenes of that city. Dalrymple seemed to appreciate the change of pace brought about by Fairs’s “entirely fastidious study of situations beloved by the artist,” and fondly remarked that Schuss is “just so worthy, like [New York dealer] Mitchell Algus.”

Walking by Rome’s Lorcan O’Neill’s gallery, the charming British dealer caught Dalrymple’s attention by gently bopping the carefully placed loop of hair on top of her head. “What is that, a bump of wisdom, like the Buddha?” O’Neill teased. He showed off a pair of scribbly, graffiti-inspired smiley face paintings by the young London-based artist Eddie Peake, and flipped through photos on his digital camera of a nude soccer game the artist recently organized at the Royal Academy, an event Dalrymple deemed “so classically English!”

Dalrymple was also drawn to New York dealer Howard Greenberg’s booth, featuring pictures by Weegee and lesser-known images by Vivian Maier, a street photographer who worked as a nanny in New York and Chicago and was recently re-discovered after her death in 2009. From there we walked over to Bruce Silverstein, another New York photography dealer. Towards the back of Silverstein’s large booth was a grid of 16 photos by the Hungarian artist André Kertész (1894–1985). Quietly facing Kertész’s creepy yet sexy photo distortions was one of the few times that afternoon that Dalrymple stood still.