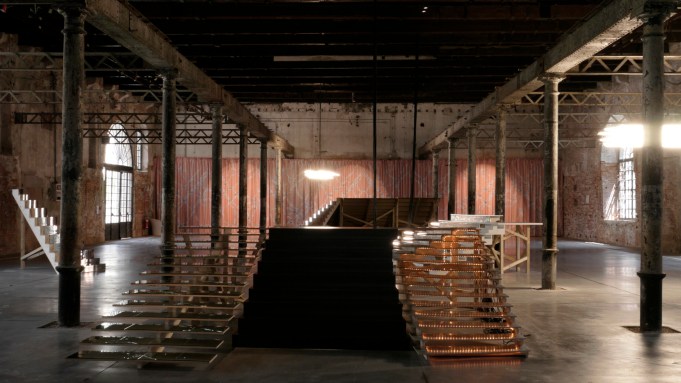 The grandiose, the edgy, the obvious and the arcane commingle in the vast Arsenale exhibition at this year’s Venice Biennale. Curator Bice Curiger’s title, “ILLUMInations,” not so subtly suggests a loose interplay of the dual themes of nationalism and formalism, in terms of the use of light and space in art. Ultimately, it’s a clever concept that somehow works to make this one of the most engaging Biennale exhibitions in quite a long time.

The show’s theme invites a broad range of interpretations played out in a mixed bag of spectacular and quotidian individual works and installations. The Arsenale begins and ends with offerings by Chinese artists, which definitely fall into the former category. “ILLUMInations” opens with Song Dong’s impressive installation of architectural fragments, including the framework of his 100-year-old family home, which he had transported from Beijing to Venice.

At the far end of the Arsenale, Yuan Gong has created a striking  outdoor installation with a rectangular “garden” of white pebbles interspersed with valves that periodically blast clouds of dry-ice fog. Nearby, a corresponding work, Cloud-Tea (2011) by Cai Zhisong, features giant white resin “clouds” that look more like carved marble boulders and help lend the installation a kind of sci-fi feel.

Filling the Arsenale’s cavernous Corderie between these displays are works that ally themselves with one or the other of the show’s core thematic concepts. There’s one of James Turrell’s familiar and transcendent light rooms, as well as Roman Ondák’s haunting black-and-white video projection Stampede (2011), of a dark crowded room that appears at first to be a live image of visitors in the room. Across the gallery, his towering and ominous Time Capsule (2011) looms like a missle.

Midway through the Arsenale, Christian Marclay’s newly legendary film The Clock—which helped him nab the Biennale’s 2011 Golden Lion for best artist—projected on a large screen, stops viewers in their tracks. It also makes you check your watch to realize in panic what little time there is left to get through the seeingly endless Arsenale.

Elsewhere, Monica Bonvicini’s theatrical construction of mirrored stairs leading to small platforms, with stage curtains covering the walls, appears to engage the audience in a more physical way. It looks like an invitation to perform; but when I was in the room, a fellow visitor got yelled at by a guard for attempting to climb the stairs. In another striking presentation, Rebecca Warren examines the formal relationship between her funky figural sculptures and minimalist constructions in steel. The precisionist abstract paintings of tiny geometric forms and neon sculptures by Iranian artist Navid Nuur are among the most outstanding works here.

It’s Urs Fischer, however, who nearly steals the show with his enormous candle sculptures that are at once hilarious and awe-inspiring. Intended to burn to the ground during the course of the exhibition, the shapes of the massive candles were still recognizable even after a few days of burning. The largest is a full-scale re-creation of Giambologna’s 16th-century marble The Rape of the Sabine Women, in the Academia in Florence. Another is Fischer’s wax portrait of his friend, the artist Rudolf Stingel. The dripped wax falling over the figure’s shoulders resembles dreadlocks.

The Italian Pavilion (unrelated to the structure of the same name in the Giardini, which hosted the second half of Curiger’s exhibition) in the Arsenale featured a sprawling group exhibtion of 200 artists from across the country to mark the 150th anniversary of Italian Unification. In this display, organized and designed by controversial curator and politician Vittorio Sgarbi, the works—many of which are installed in the middle of the gallery on an armaturelike apparatus—are awkwardly crammed together. And, aside from the work of a few art stars, such as Enzo Cucchi, Carlo Maria Mariani, Valerio Adami and Jannis Kounellis, the rather chaotic exhibition has few highlights.