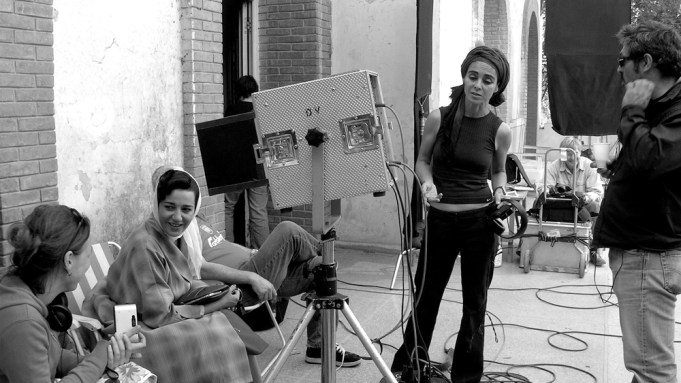 The recent online release of videos depicting the destruction of ancient cultural heritage sites across the Middle East by ISIS militants has served as perhaps the strongest, if not most visceral, reminder of art’s preciousness. At the very least, if we are searching for silver linings, these instances of iconoclastic obliteration have prompted a global dialogue about how to safeguard—and treasure—culturally meaningful art objects.

In an effort to foster conversation about a host of international issues, from immigration to women’s rights, the Robert Rauschenberg Foundation, a nonprofit based in New York, will donate a pair of limited edition prints by Iranian-born, New York-based artist Shirin Neshat to 33 colleges and universities. Ghada, in which a middle-aged woman in a hijab looks balefully at the camera, and Sayed (both 2013), a photo of a wrinkled and seemingly war torn older man, are part of the foundation-sponsored series “Our House is on Fire,” Neshat’s documentation of Egyptian citizens following the Arab Spring.

The multimedia artist garnered international attention in the 1990s with her photos of women’s faces inscribed with Arabic calligraphy. Her gender conscious, identity focused practice, then and now, invites Western viewers to share in the artistic wealth of regions politically alienated from the U.S., putting distinctly human faces to often murky political dispatches. Neshat has won numerous awards, but the Cinema for Peace Special Award, presented by the Hessischer Filmpreis in Germany, and the Hiroshima Art Prize, established by the Japanese city in recognition of artists whose practice promotes the ideals of world peace, reflect her commitment to expanding understanding between peoples.

“Neshat’s project embodies Rauschenberg’s own belief that art could change the dialogue for challenging international issues,” Christy MacLear, executive director of the Rauschenberg Foundation, said in a release. “Our goal with this donation is to encourage dialogue about the portraits’ artistic, cultural, and political value while also creating an opportunity for academic departments to collaborate with school museums and galleries.”

Competition for the prints was fierce; recipient institutions submitted proposals for how they would incorporate the works into their campus cultures. Testifying to the myriad uses for art, entries greatly varied. The University of Pennsylvania, for example, plans to host a panel discussion with religious chaplains and rabbis to discuss Christianity, Islam and Judaism. Columbia University will display the prints in their law school to use as case studies for human rights issues. Meanwhile, Tufts and the University of Virginia will collaborate with their medical departments to improve students’ visual analysis and observation skills.

AirPods Are Just $69 This Weekend — Their Lowest Price Ever