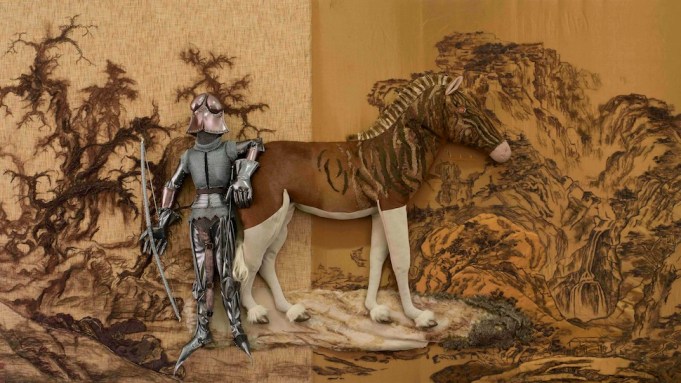 Hong Kong’s worst rains since 2010, which resulted in landslides and the temporary shutdown of financial markets and government offices, couldn’t delay last week’s inaugural edition of Art Basel in Hong Kong (May 23-26).

Throughout the city, art venues aimed to take advantage of the influx of collectors. Some of the city’s 80 galleries brought out their big guns from East and West—Pearl Lam is showing large new abstract paintings by Chinese artist Zhu Jinshi (through July 3) and Gagosian Gallery is offering works by Jean-Michel Basquiat (through Aug. 10).

Nonprofits also aimed to draw visitors with notable shows. At ArtisTree exhibition space, Parallel Contemporary Art put on a group show of 24 local artists, “Hong Kong Eye” (through May 31), organized by independent curator Chang Tsong-Zung (Johnson Chang), PCA’s Serenella Ciclitira and the Saatchi Gallery’s Nigel Hurst. Para/Site, meanwhile, organized “A Journal of the Plague Year,” a group show (through July 20) about perceptions of Hong Kong as a breeding ground for disease; Hong Kong was the epicenter of the SARS (severe acute respiratory syndrome) epidemic in 2003.

Throughout the fair, galleries large and small, eastern and western, reported brisk sales to Asian and European visitors. Singapore’s Chan Hampe Gallery sold the one piece in its booth before the official preview. White Cube (London, Hong Kong, São Paulo) sold works by Theaster Gates ($135,000) and Gary Hume ($100,000) to Asian collectors on day one; New York’s Paul Kasmin Gallery sold three Francois-Xavier and Claude Lalanne sheep for $650,000 to a Hong Kong collector on the fair’s second day; by day three, Dianne Tanzer Gallery + Projects (Melbourne) sold out its booth, with all 8 works by Juan Ford going for a total of $150,000.

The fair’s 245 exhibitors, hailing from 35 countries, were spread over two floors of the gigantic Hong Kong Convention and Exhibition Centre (HKCEC), with two long escalator rides separating levels one and three. While some dealers felt a bit neglected on the third floor, where crowds were smaller, Jennifer Caroline Ellis, of Hong Kong’s Edouard Malingue Gallery, was pleased with her spot there, alongside Beijing Commune, Berlin’s neugerriemschneider and Johannesburg’s Goodman Gallery.

Some observers were anxious that the fair would become Westernized or homogenized with the involvement of Art Basel, but several regional dealers felt those fears had not come to pass, noting that if anything, the fair is more global than in past years without losing its regional identity. Several Asian dealers had prominent spots in the floor plan, offering high visibility.

“Everyone is saying that the presence of Asian galleries feels much more on an equal footing with our Western counterparts,” Billy Tang, of Beijing’s Magician Space, told A.i.A. “I think there is a fear that galleries will pander to the other culture. But many of the presentations I have seen from Chinese galleries negotiate cultural differences from unique angles.”

One small fly in the ointment, which distressed New York and European dealers mentioned to A.i.A., was the tendency for visitors to handle the art. Sculptures were being picked up off the floor or even removed from walls, the dealers said.

“At art fairs in Shanghai and Hong Kong I’ve found it’s common for people to touch the work,” Maya Kramer, a consultant with the exhibitor Shanghai Gallery of Art, told A.i.A., adding that in China, “There’s not yet a museum culture. Art collecting is a pretty recent development. The region is arriving but there’s still a ways to go. That’s what makes it interesting.”