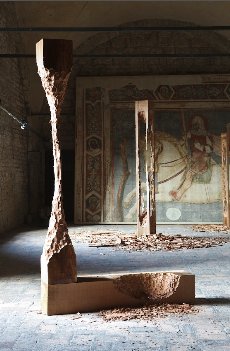 The art world converges on Miami Beach this week for the 11th edition of the glitzy fair Art Basel Miami Beach (ABMB) (Dec. 6-9). With over 260 international galleries showing works by upward of 2,000 artists and numerous satellite fairs, ABMB is known for celebrity browsers like Beyoncé, $80-million Warhols and late-night shindigs.

ABMB was founded in 2002 under the leadership of Sam Keller as a sister fair to Art Basel, and has grown from an initial roster of 155 galleries to the super-fair with multiplying satellites that we know today.

“It’s been exciting to watch it grow into an international art event,” said Bass Museum of Art board president George Lindemann Jr., speaking by phone with A.i.A. Monday morning.

Art Galleries includes over 200 exhibitors of all sizes, in booths at the Miami Beach Convention Center. “I’ve really enjoyed New York dealer Gavin Brown’s booth,” Lindemann said, “as well as the Beyeler Foundation booth, organized by Sam Keller. They both really have their finger on the pulse.”

A subsection of the galleries sector, Art Kabinett, consists of mini-exhibitions within gallery booths, some historical, some group shows, some individual projects. Art Nova is devoted to galleries representing two or three artists with works less than three years old. Galleries in Art Positions feature a single project.

Art Public is organized for the second year by Christine Y. Kim, assistant curator of contemporary art at the Los Angeles County Museum of Art. It takes place in Collins Park and includes sculptures, interventions and performances. Gary Simmons, Ugo Rondinone, Adam Pendleton and others will be featured.

Art Video, now in its second year, showcases 60 artist videos, some at the Miami Beach Convention Center and some outdoors in SoundScape Park. The program is organized by David Gryn, the director of London arts PR and fundraising agency Artprojx. William Kentridge, Robin Rhode, Ragnar Kjartansson and Theaster Gates are among the artists included.

A series of afternoon salons features panel discussions and conversations, starting on Thursday with “The Age of Empires,” a conversation about the art market between art advisor Josh Baer and super-dealer Marc Glimcher, of Pace Gallery. “I’m especially looking forward to the conversation between Alastair Gordon and Wendell Castle,” says Lindemann. “Alastair is an excellent writer and Wendell Castle is a master furniture designer who has just turned 80.”

Cuban-born, Madrid-based artist duo Los Carpinteros (Marco Castillo and Dagoberto Rodriguez) will construct The Güiro, an egglike art bar installation on the oceanfront inspired by a Cuban percussion instrument. (In Cuban slang, the word also connotes a party.) Commissioned by the Absolut Art Bureau, The Güiro will serve bespoke cocktails.

At the Museum of Contemporary Art North Miami, Ragnar Kjartansson stages the U.S. debut of a 12-hour film (6 p.m.-6 a.m., Dec. 8-9) of his hypnotic 2011 performance Bliss, a staging of Mozart’s 1786 opera The Marriage of Figaro, but with cast and orchestra continuously repeating a less than three-minute excerpt.

At the Bass Museum appears “The Endless Renaissance,” featuring solo projects by Eija-Liisa Ahtila, Barry X Ball, Walead Beshty, Hans-Peter Feldmann, Ged Quinn and Araya Rasdjarmrearnsook (Dec. 6, 2012-Mar. 17, 2013). “It’s exciting that Silvia Karman Cubiñá, our curator, is not doing the usual thing institutions do, which is to have, say, a 30-year retrospective of someone like Jeff Koons. She’s showing artists some of our visitors will not have seen.”

As always, local collections will offer public hours. The Cisneros Fontanals Art Foundation will show “Unsaid/Spoken: Selected works from the Ella Fontanals-Cisneros Collection and the CIFO Collection,” curated by Moacir dos Anjos and José Roca. The Margulies Collection at the WAREhouse will feature exhibitions of over a dozen artists as well as its permanent installation. The Rubell Family Collection will show “Oscar Murillo: Work” and a group show with 31 artists, “Alone Together.”

This year the art extends into the sky. 15 artists—including John Baldessari, Richard Prince and Lawrence Weiner—will exhibit text works on banners flown over Miami. “Plane Text” is presented by boutique hoteliers Morgans Hotel Group. Jack Pierson’s banner pokes fun at the art-fair one-percenters: “We’re rich we can do what we want.”

ABMB is, of course, perhaps just as well known for revelry as for art. “The best part is the parties,” Lindemann confirms. “The worst part is the traffic getting to them. What keeps you going is the knowledge that the best one might be the one you missed. You can sleep on Monday, when everyone is gone.”