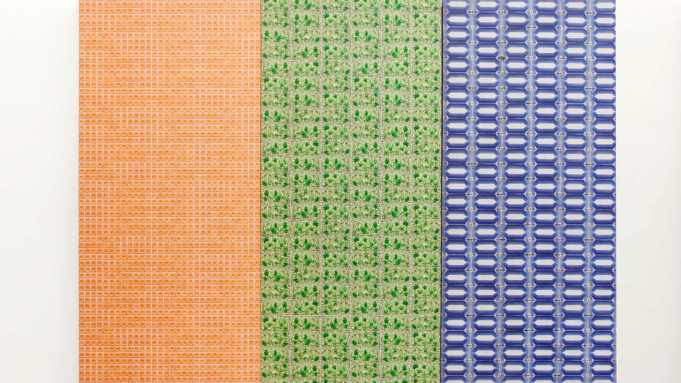 Dealers surveyed by A.i.A. at the Art Basel Miami Beach VIP preview agree: it’s a serious, international crowd, not a feeding frenzy. As is customary, there were plenty of celebrity sightings–Sean Combs, Owen Wilson and Christian Slater on the entertainment side, and, in the art-world column, L.A. megacollector Eli Broad, and Bed Bath & Beyond founder Marty Eisenberg–but it wasn’t exactly like Black Friday. Darren Flook, late of London’s Hotel Gallery, had heard that Miami’s hotels were not entirely booked up this time.

“We’ve had a lot of interest,” Emanuela Campoli, of London’s Campoli Presti Gallery, told A.i.A. “But it’s a little more relaxed than other fairs. It’s not like at Art Basel,” she added with a laugh, “where everyone just attacks you!” Behind her, meanwhile, New York collectors Barbara and Howard Morris showed interest in a $25,000 wall sculpture by Jutta Koether.

Campoli, meanwhile, took her time showing A.i.A. a large sculpture by Nora Schultz, Desert Rally, that extended over the wall and floor, comprising photographs, carpet swatches and applied paint among other materials, that was devoted to Jutta Kleinschmitt, a devoted participant of desert motorcycle races. The asking price was $24,000.

Near Mexico City’s kurimanzutto gallery, Barbara Morris said, “You have to go really slowly,” counseling New York dealer Elizabeth Dee not to try to take in the whole fair at a gallop. A striking piece by YBA Sarah Lucas at kurimanzutto consisted of a black toilet on the floor, with nylons filled with cotton forming several breastlike shapes that drooped over the sides of the toilet. It was a bit like Marcel Duchamp meets Louise Bourgeois at a party hosted by Banks Violette.

Just a few minutes into the preview, Anton Kern Gallery director Christoph Gerozissis confirmed that the fair had been very good to the gallery so far. “And we deserve it,” he said, after the gallery took a pummeling from Storm Sandy. “We got pretty severely hit,” he said. Kern’s booth was partly wallpapered with a work by Jonas Wood, showing basketballs on a white background, lending the space a cheery aspect. An average New York apartment wall could be papered for just a few thousand dollars, Gerozissis calculated.

A staffer at New York’s Greene Naftali Gallery confirmed that an Ida Ekblad work and other artists’ offerings had already sold, 35 minutes or so into the preview. “It’s been pretty strong so far,” he said.

Some wall pieces by Lucia Koch, at São Paulo’s Nara Roesler Gallery, seemed to express the fair’s bright mood. They’re made from photographs of various colorful patterns on wood panels that slide from side to side on rails on the wall, and were on offer for a very reasonable $30,000.

Denis Gaudel, of Paris gallery Gaudel de Stampa, was proud of a Jonathan Binet painting, Stories Being Told, showing black slashes on a two-panel blank canvas that seemed to have had its top unevenly lopped off, and of a large, stained canvas by Jessica Warboys that hung on the wall and spilled over onto the floor. He was perhaps even prouder, as he talked to Dee, about the gallery’s plans to show at New York’s Independent art fair, which is coming up in March.

Spotted in line for lunch at the collector’s lounge, Thomas Campbell, director at New York’s Metropolitan Museum of Art, said even he, head of such a sprawling institution, couldn’t take it all in just yet. “The second day is when things begin to coalesce. Day one, the volume of art you’re taking in, as well as the other people, is overwhelming,” he said, before allowing Christie’s chairman of postwar and contemporary art development Amy Cappellazzo to cut in line.

Barbara Gladstone’s Simone Battisti pointed out some Rosemarie Trockels, Martin Kippenbergers and an Anish Kapoor that had found buyers.

After lunch, at the stand for Modern Art, from London, principal Stuart Shave confirmed that he had sold two examples of an editioned Eva Rothschild sculpture in black and dark red, of linear geometric shapes. Several Richard Tuttle wall sculptures were on reserve for a European museum, and a Jacqueline Humphries painting was on reserve to a U.S. museum.

At Berlin gallery Johann König’s stand, a staffer confirmed that a painting on the wall, Helen Marten’s Geologic Amounts of Sober Time (Mozart Drunks), took its title from an expression in David Foster Wallace’s novel Infinite Jest, parts of which take place in A.A. meetings. Hanging from the bottom of the painting, which depicts a women’s face, dangle several bottles of alcoholic beverages. Asked how the fair was going so far, she said, “Very well!” and, hustling off to attend to some buyers, she added over her shoulder, “It’s still going.”

Meanwhile, cocktail waitresses wheeled around carts of Ruinart champagne, providing the cocktails to the lively but sober atmosphere.