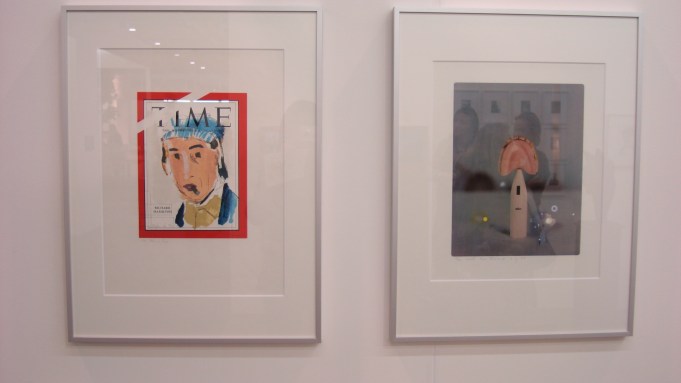 Most of the collectors at this year’s ArtBrussels were Belgian or Dutch; German collectors evidently prefer to shop at Art Cologne, which took place two weeks earlier, or at Gallery Weekend Berlin, which coincided with the Brussels fair this year due to the date of Easter. German participation was lower than last year, with hardly a handful of Berlin galleries present.

“American visitors loved the timing, because they could go to both events, but I will do my very best not to have a clash again,” fair director Karen Renders told A.i.A. Selection committee member and veteran gallerist Albert Baronian claimed, “this year 15% of the fair’s VIPs were from the U.S.”

Although the bill included 170 participants from 26 countries spread across two large halls, the bulk of high-grade booths came from Belgium, The Netherlands, France and the UK, notably Lisson, who will expand to Milan in the near future. For the first time in the fair’s history, Antwerp’s heavyweight Zeno X Gallery enlisted. American galleries were also present, but mostly through double entries like Gladstone (Brussels/New York), Lelong (Paris/New York) and Yvon Lambert (Paris/New York). The only exclusively American big gun was Perry Rubenstein.

The first hall had a great mix of younger and established galleries. Art Brussels’ dynamism was underscored by the presence of many artists. French performance artist Orlan was there, as were Jacques Charlier, Stephan Balleux, Michel Francois and Jan de Cock, who, along with Jonathan Monk, Gregor Hildebrandt and Fabrice Gygi, showed design objects at the booth of a Belgian design gallery, D&A Lab.

Empty booths were a common complaint in the second hall, and a sign of a sluggish fair for the more established participants housed there. Surely the location of the fair’s entrance, in the first hall, played a part in the distribution of visitors, who preferred to linger where nearly 100 of the 170 booths where located, creating a lively atmosphere. It was a raw deal for the established galleries.

The overall quality of the fair was good, “remarkably higher compared to other years,” said Marc Ruyters, the editor-in-chief of Belgium’s art magazine art. At the stand of Galerie Sonja Junkers from Munich, a 1968 artist’s proof of a photographic print, The Critic Laughs, by Richard Hamilton, featured an upper denture that replaced the head of a Braun electric toothbrush. It was a steal at 3,000 Euros, and fittingly drew serious interest from a dentist.

“The Belgian dentist, who collects contemporary art on a radically international level, is world-famous,” Bart de Baere, director of Antwerp’s Museum van Hedendaagse Kunst Antwerpen, told A.i.A. Luc Haenen, a Belgian collector, added, “many of us are cardiologists, gynecologists, solicitors or surgeons.” It surely didn’t hurt the sale that the work bore an inscription, “To Wolf from Richard,” most likely referring to video-art pioneer Wolf Vostell.

On opening night, a short cab ride from the fair, near Place Sainte-Catherine one of the city’s liveliest areas for nightlife-French collector Frédéric de Goldschmidt showcased part of his private collection for the very first time in various buildings. He collects an eclectic mix, ranging from young emerging talents to established names like Janis Kounellis and Jack Pierson. “I decided to recycle Monets into money and then into modern and contemporary art,” he said of his turn to contemporary just two years ago.