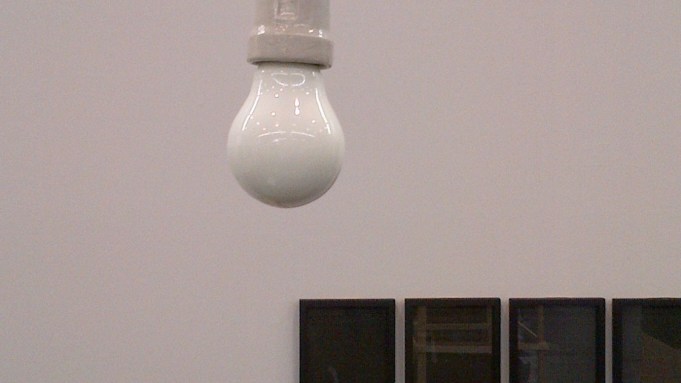 “A gallerist never tells the truth at an art fair,” Berlin’s Martin Klosterfelde told A.i.A. this past weekend during the VIP preview of the 46th edition of Art Cologne. He then proceeded to reveal to me the price of Christian Jankowski’s light installation Kunstmuseum (roughly $50,000) and told me of a waitlist of collectors for two large-scale drawings by Jorinde Voigt. His booth was one of the highlights of this year’s fair.

“Pleasantly empty and very productive,” Alexander Schröder of Galerie NEU (Berlin) remarked of the crowds, adding that he had already sold seven works. Along with Carlier/Gebauer and Klosterfelde, NEU was one of the important Berlin-based newcomers to the fair.

International participation was low, but high-end, with Thaddaeus Ropac (Paris/Salzburg) and David Zwirner (New York) being the most important international first-timers. “It’s very important that these big guns do well-otherwise they will not return next year,” one gallerist told A.i.A.

And business was good. Ropac sold Warhol’s Head (after Picasso) No.5, 1985, for just over $1 million almost immediately, and Zwirner sold out works by Michael Riedel for $65,500 a piece within the first hours. Both gallerists looked confident that they would return to Art Cologne next year.

Young galleries came mostly from Germany, despite efforts to internationalize the fair through a co-operation with the New Art Dealers Alliance, NADA, who received a section of the floor to create a fair-within-a-fair. 13 of the 33 booths in the NADA section were American, a slightly low tally. Younger Berlin-based galleries included Zak Branicka, Lüttgenmeijer, Aanant & Zoo, Croy Nielsen, Klemm’s, KOW, PSM, and Reception.

In only his fourth year as fair director, Daniel Hug has turned the fair into a serious competitor in the art market circuit. During an interview with Christoph Driessen for Germany news agency dpa, Hug said, “one wants to be number one.” He’s got some ways to go. With few international heavyweights, Art Cologne is still more like a fair for upper- and mid-range German galleries than an international showcase.