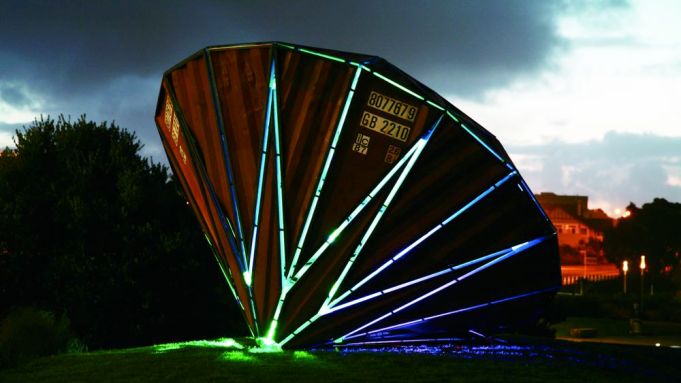 Globalism is alive and well in Asia, at least for the next few days. Art HK 12, the fifth edition of the Hong Kong International Art Fair (May 17–20), has presented its May 16 preview crowd of journalists and decked-out VIPs with a one-world vision that defies the post-2008 retraction into distinct East-West art world spheres.

Some 266 galleries from 38 countries are tendering works in two enormous exhibition halls at the futuristically designed Hong Kong Convention and Exhibition Center on Victoria Harbor. At the center of each of the two levels is the Asia One section, encompassing a total of 49 regional galleries offering one-artist displays, while numerous other Asian galleries—especially those like Kukje (Korea), Boers-Li (China), Lin & Lin (Taipei) and Tomio Koyama (Japan), boasting internationally recognized rosters—are sprinkled throughout the fair among scores of dealers from abroad. Western participants include Acquavella (U.S.), Simon Lee (UK), Andersson/Sandström (Sweden), Nara Roesler (Brazil), and Joan Prats (Spain). Adding to the mix, Art Futures, with 35 booths on the periphery of the upper hall, features artists under 35 years of age from galleries that are not more than eight years old. One of the Art Futures artists-to be chosen by veteran museum director Lars Nittve, art magazine publisher Elaine Ng and international curator Okwui Enwezor-will receive a cash prize of $25,000.

Yuko Hasegawa, chief curator of the Museum of Contemporary Art in Tokyo, has organized the Art HK Projects—10 installations drawn from participating galleries and positioned, island-like, here and there in 1,100-square-foot spaces. Selections include pieces by Japan’s Yayoi Kusama, Indonesia’s Handiwirman Saputra, Brazil’s José Patrício and China’s Yin Xiuzhen. Ai Weiwei, still deeply embroiled with authorities in Beijing, is represented by a wall of 120 letters he has received from the Chinese government.

A global nomad, Hans Ulrich Obrist, director of London’s Serpentine Gallery, is on hand to promote his latest publishing venture, The Future Will Be . . . China: Thoughts on What’s to Come, a compilation of brief comments on impending developments—or, in many cases, the nature of futurity in general—by dozens of artists and other cultural workers, almost all of them Chinese.

To judge by the marketing strategy favored by gallerists in Art HK 12, that future will be culturally hybrid at every level. Berlin dealer Michael Janssen traveled to Hong Kong with work by, among others, Indonesian artist Dita Gambiro, who dangles swaths of synthetic hair from brass versions of human rib cages. Tokyo’s ShugoArts has architectural interior photographs by Germany’s Carsten Höller. Arndt, from Berlin, is showing photo installations by Britain’s Gilbert & George along with paintings by Indonesia’s FX Harsono. Pi Artworks, an Istanbul gallery, has mounted images from Turkish artist Ahmet Sel’s black-and-white photo series “The People of Moscow” (2000).

This kind of borderless mash-up is great fun and even heartwarming in its world-community evenhandedness. But finding the right global business model may be more of a trick. Some Western dealers who brought big-name, big-ticket items to previous Hong Kong fairs have scaled back to a mid-range or lower-upper price level. Many offerings are respectable but not really top-notch examples from the respective galleries’ stock.

This approach may succeed in the short term, but it carries a serious perceptual risk. Yes, many Asian collectors are relatively new to the market, but that doesn’t mean that they—to say nothing of their more experienced regional peers—want to be sold down to. As one Chinese-born, internationally active private dealer put it to me bluntly: “Do Western dealers think Asian buyers are stupid?”

Striking the right transactional balance, accommodating sensibilities formed on opposite sides of the earth—these are among the challenges facing the Art Basel organization, which recently bought 60 percent of Art HK and will undertake its first edition of the event next year. Magnus Renfrew, the Hong Kong fair’s longtime director, will remain in place, becoming one of the Basel organization’s three top figures. He states that the rechristened Art Basel Hong Kong will retain its regional character, and its regional commercial dominance, by continuing the current 50-percent-Asian participation ratio. Selectivity, evidenced this year by winnowing some 700 applicants down to 266 participants, is likely to increase, especially if Art Basel exercises its option to purchase the remainder of the Hong Kong operation in 2014. After all, as Renfrew points out, Art Basel has “the art world’s greatest Rolodex.”