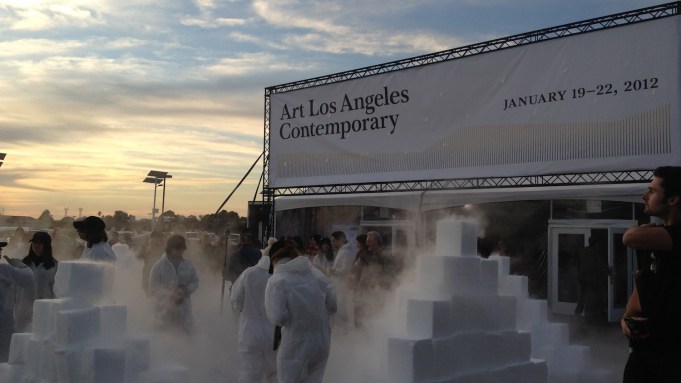 The crowd gathered outside of Santa Monica’s Barker Hanger last Thursday for the preview of Art Los Angeles Contemporary (ALAC) was heavy on volunteers. Dressed in matching white workman jumpsuits, these young men and women were arranging blocks of dry ice into ziggurats and laying out flares for a restaging of Judy Chicago’s Disappearing Environments (1968/2012), an installation that shrouded the fair’s entrance in red-lit fog. Displayed out of its original context—Century City, the L.A. neighborhood then rapidly rising with finance and entertainment high-rises—any hint of its original critique was relinquished.

This being its third installment, ALAC, founded by producer Tim Fleming, is very much a fair in its infancy. The number of exhibitors held steady from last year, at 70, but featured a more international selection of galleries, even as Los Angeles collectors have been known to stay local. This year, the fair was timed to coincide with the kickoff of Pacific Standard Time’s (PST) Performance Art Festival.

At the booth of ltd Los Angeles, artist Anton Lieberman’s Land Periscope (2011), a wood structure resembling an oil rig, offered up a makeshift periscope composed of bike handles at its base, a slender black pipe rising up and internal mirrors reflecting footage transmitted from a video camera at its apex. Onlookers were able to view 360-degree surveillance of the fair from above through its lenses. His sculpture played on the activity of looking in a commercial scene.

“We’ve been pleased with the level of engagement,” owner Shirley Morales told A.i.A. “We represent practices, not objects, which is a challenge at a fair.” She noted that people were stopping for stretches of time to watch videos by Kenneth Tam, in which the artist is felt up through a cardboard box in his living room by a stranger found on Craigslist.

Some collectors wasted no time going toe-to-toe with dealers early in the afternoon. In the booth of new L.A. gallery Ambach and Rice, one collector announced to her husband the price of a slight Karen Sargsyan paper sculpture (made especially for the fair), then signaled him toward dealer Charles Kitchings, exclaiming, “OK, now discuss. Negotiate.” Her energy infected passersby, who promptly backed up traffic to view the row of Sargysan’s five sculptures in the series precariously balanced on a shelf.

Los Angeles-based collector Leslie Fran, checkbook and water-damaged invoices in hand, and artist Delia Brown stopped in to glimpse the solo presentation of Mary Weatherford’s vinyl on linen paintings at Brennan and Griffin (New York). The two chatted about Brown’s latest YouTube rap video Yoga Bitch (2012), a satire of the competitive spiritual-types that pepper this city.

Intimacy and friendliness typified the fair, which remains very much the local affair. A buoyant Fran remarked to A.i.A., “It’s the perfect scale, and also the right mix of the familiar and the new, which makes it very comfortable.”

In the early evening, influential collector Dean Valentine and a posse of friends were spotted leaving David Kordansky’s booth, where a strong showing of bronze and steel sculptures by Anthony Pierson quickly sold out. At Mark Selwyn (Los Angeles), collectors huddled around  photographs of appropriated cut-out images arranged on shelves by Matt Lipps, soon to be featured at Saatchi Gallery, though at that time no one had yet pulled the trigger.