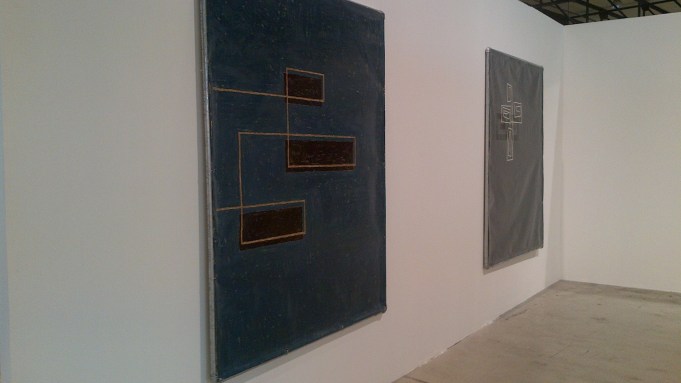 Timed to attract collectors concluding their summer holidays in the Cote d’Azur, the sixth edition of Art-O-Rama kicked off in Marseilles last Friday. Open through Sept. 16, the small art fair focusing on emerging galleries turns into a partially compartmentalized exhibition after the first weekend, as dealers return to their galleries in time for the start of the season.

Instead of using traditional booths, the fair takes a freestyle approach, where the gallerists design their own presentations within a given space. James Gardner of Frutta (Rome) told A.i.A., “as opposed to other fairs, Art-O-Rama allows me to expand. The size of my space here is double that of my gallery.” D+T Projects (Brussels) replicated their gallery walls full-scale and showed video works by both Ivan Arigote at over $4,000 and Elena Bajo at over $7,000 “reserved and as good as sold” by the second day, gallery director Sebastien Delire told A.i.A.

Heavyweight Eva Presenhuber (Zürich) joined the roster for the first time and presented a solo booth of four new paintings by next year’s Venice Biennale entry for Switzerland, Valentin Carron, priced $40,000­-$60,000. Presenhuber, on top of refreshing ties with collectors around Marseilles, is strengthening her efforts in the French capital with a group show in a temporary loft space at 3, rue de la Manutention in the 16th arrondissement on Sept. 12, which will stay open till this year’s FIAC (Oct. 18–21).

Apart from attracting local collectors like Marc and Josée Gensollen and Marie-Hélène and Marc Feraud, the fair drew Belgian collectors, including the colorful Galila Barzilai Hollander and Frédéric de Goldschmidt from Brussels, who commented, “I enjoyed the fair much more than the weather.” The sun had stayed away for most of the weekend, shooing collectors and artsy beach buffs into the fair.