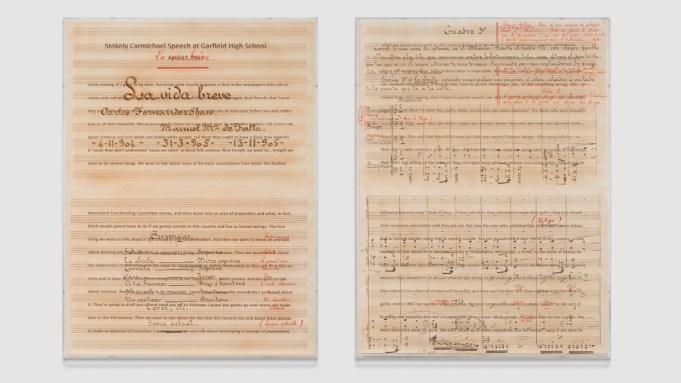 On Feb. 28, during a bimonthly gallery walk in the Los Angeles hubs of Culver City, Downtown and Hollywood, the new art outpost Art + Practice drew an impressive crowd. Located off the beaten gallery path, in Leimert Park, A+P is a nonprofit founded by artist Mark Bradford, collector and philanthropist Eileen Harris Norton, and activist Allan DiCastro. Its mission is unique and multipronged, with a stated mandate to promote contemporary art and provide services and support to foster youth. And with a 17,000-square-foot campus housing community organizations, A+P is positioned to play an important role in the recently identified “Leimert Park Renaissance.”

The Leimert Park neighborhood’s reputation as an African-American cultural destination was cemented by Brockman Gallery, which focused on black artists and operated on Degnan Boulevard from 1967 to 1989. Murmurs of the area’s revival were first heard in 2014 after the New York dealer and beleaguered former Museum of Contemporary Art Los Angeles director Jeffrey Deitch attended an opening at Brockman’s former site, now Papillion Gallery, run by Michelle Papillion.

To achieve their goals, A+P has forged strategic and valuable partnerships. Curators from UCLA’s Hammer Museum will helm the art organization’s exhibition program and lecture series. The RightWay Foundation—an organization providing social services to Los Angeles’s foster youth population, many of whom reside within two miles of Leimert Park—is now headquartered at A+P’s expansive campus. And Eso Won Books, a self-described “black (people) owned bookstore” that has hosted book signings by Toni Morrison and Barack Obama, will relocate from its Degnan storefront to the A+P building. There they will continue to organize their own events while taking charge of the retail component of A+P’s programming. Eventually the space will also host A+P’s lectures and public programming, organized by the Hammer’s assistant curator Jamillah James. The bookstore thus exists as a ready-made retail entity on campus akin to the museum gift shop, but more importantly, the arts organization capitalizes on Eso Won’s relationship with residents of Leimert Park and the surrounding area.

The genesis of this multi-faceted project reaches as far back as the year 2000, when Mark Bradford, now an internationally known artist, was still struggling to make ends meet by styling hair and painting signs at his mother’s hair salon, just around the corner from where Art + Practice now stands. Norton was one of Bradford’s salon clients and one of his first collectors, acquiring the aptly-titled Dreadlocks caint tell me shit (2000) for $3,500. Bradford and DiCastro, an activist and former president of the Mid-City Neighborhood Council, have been romantic partners since the 1990s. Art + Practice is the outcome of their dream to cross-pollinate their respective professional fields.

A+P’s affiliation with the Hammer guarantees Bradford’s ambition to host rigorous, museum-quality exhibitions at the gallery space. Longtime friends, Bradford and Hammer Museum director Ann Philbin had been in conversation for years about his desire to create a socially conscious art foundation. And when Bradford asked the Hammer to be involved in A+P, his timing could not have been better—the invitation coincided with a call for grant applications from the James Irvine Foundation for institutions teaming with community organizations. The Hammer eventually received $600,000 from the foundation earmarked for the A+P project.

Art + Practice’s open house on Feb. 28 showcased the fruition of the founders’ efforts to expectant guests, including Mayor Eric Garcetti, artist Betye Saar, City Council President Herb Wesson, artist Edgar Arceneaux and Supervisor Mark Ridley-Thomas. The back of the building housed computer labs and classrooms with circular meeting tables, where about 70 transitional age foster youth have been congregating and receiving life-skills training since August 2014. (The ultimate goal is to enroll 100 foster youth per year while continuing to serve alumni of the program.) The artist-in-residence studios-currently hosting painter Sandy Rodriguez, sculptor and recent UCLA MFA graduate Aalia Brown, and Brockman Gallery co-founder Dale Brockman Davis, who is working on an archive of his gallery-were open to the public.

But the focal point of the festivities was the exhibition space, which highlighted new work from Los Angeles-based artist Charles Gaines, who also has a show spanning the years 1974 to 1989 on view through May 24 at the Hammer. In a 12-part work, Gaines overlaid Plexiglas cases painted with the operatic score of the tragedy La Vida Breve (ca. 1904) atop the transcript of a 1967 speech from Black Panther Stokely Carmichael. The juxtaposition of these two unlikely documents creates a combination that evokes a fever pitch in the face of powerlessness and injustice. As the gypsy Salud falls dead at the feet of her wealthy, unrequited love Paco in La Vida Breve, admonishing his loyalty to class instead of true love, Carmichael rebukes the oppressive and exploitative labels and policies applied to black men and women by those in power. Salud commits suicide by donning a wedding gown and slashing the dress—and her own flesh—off violently. Carmichael ends his speech with the words, “Our guts and our bloods have been spilt for this country, it’s time we spill them for our people.”

In the wake of the racially charged shooting deaths of Michael Brown and Eric Garner, and the ensuing aftermath of protests and riots, the work was timely and resonant. And in this historically black neighborhood, with many black gallery visitors, the exhibition felt particularly germane.

In spite of the somber theme, the exhibition opening was jovial and celebratory. Yet there was an unmistakable sense of gravity—perhaps punctuated by the presence of the mayor and the A+P founders—in being privy to an institution that may prove to be mobilizing for the immediate community as well as historically important for a wider demographic.

Speaking about the forthcoming program, Philbin said, “For the first year it was understood that the artists would be African American.” Next up the gallery will host an exhibition from painter Njideka Akunyili Crosby, followed by a show from octagenarian assemblage artist John Outterbridge, then a presentation by the three artists-in-residence.

Philbin contextualized the brand new project in the landscape of socially responsible arts institutions, comparing its mission to Project Row Houses, an arts and culture organization cofounded by artist Rick Lowe in Houston’s historically African-American Third Ward. “With Project Row Houses, Lowe brought an entity and an organization into the neighborhood that permanently changed it. And that is what Art + Practice will do,” she said. “There will be a restaurant, a gallery; they’ll use the theater next door. And of course the heart and soul of this is the transitional foster youth program. These are all meant to be permanent additions to the neighborhood.”

Zepeda vs. Prograis Live Stream: How to Watch the Boxing Fight Live Online