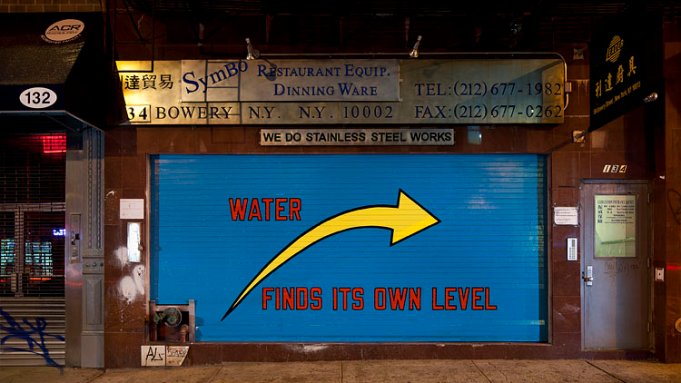 The voice on the other end of the line is as deep as any I’ve heard-fatherly, wise and authoritative: “Hello, this is Lawrence Weiner.” I’m on the Bowery, listening to an audio recording by the artist as part of Art Production Fund’s “After Hours: Murals on the Bowery.” The project, which launches today in conjunction with the New Museum’s four-day Festival of Ideas for the New City, comprises 18 site-specific murals painted on the roll-down security gates of businesses on the Bowery, running from Houston to Grand Street.

The interactive audio guide, accessible by cell phone, leads visitors to each site while the artists—Elmgreen & Dragset, Mary Heilmann, Glenn Ligon, Adam McEwen, Barry McGee and Richard Prince—describe their pieces and, in many cases, their own connections to the area. APF chose artists whose work was “bold, graphic and message driven,” the organization’s cofounder Doreen Remen told A.i.A.

The New Museum and APF scoured the Bowery for the best gates, even promising to return the gates to their original condition. Many of the businesses were initially ambivalent. “Everyone’s gut reaction was ‘no’; others were just confused,” Remen explained. In the end, those that said yes were thrilled, she said.

APF made sure to put a clause in the agreements that businesses wouldn’t remove the gates at any time to sell the work.

Some of the murals are abstract; others incorporate text, and often the imagery blends in seamlessly with its environment. Weiner’s piece, painted a superhero palate of red, blue and yellow on a closed restaurant supply store reads “Water Finds Its Own Level.”

Judith Bernstein’s mural is simply titled Fuck War. On the audio guide, she says, “The Bowery is raw, gritty and intellectual, just the place for political activism.” The artist cites the decade-long Iraq War the U.S. was involved in as her motivation.

By the sprawling Whole Foods Market on Houston, Deborah Kass’s mural—created with pulp, ink, the Brooklyn design studio—reads, “I Wanna Rock With You” because, she says on the guide, the ’80s-looking chair store it’s hosted by “screamed Michael Jackson.”

Kass recalls living on the block of Rivington Street where Freeman Alley is tucked away. Tormented by rats, she left the neighborhood in the middle of the night and never returned. The street is now a popular nightlife destination and the site of galleries and an upscale men’s store and barbershop. It does, however, still exude that sense of freedom and creativity that historically attracted artists to the area, which means “After Hours” fits right in.