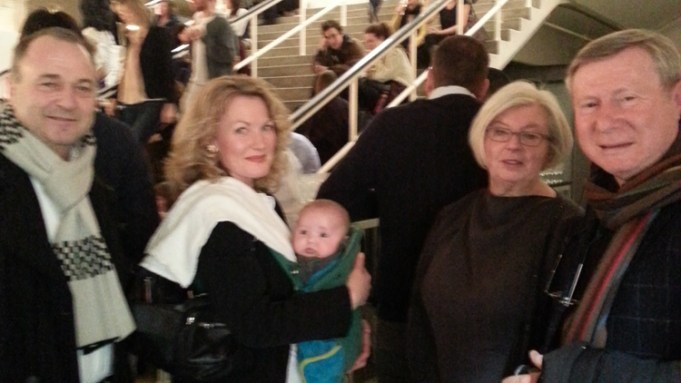 Proud as punch, fair director Fons Hof opened the 12th edition of Art Rotterdam last Wednesday and, with it, “Projections,” a new section focused on moving image artworks that featured 19 galleries. “Projections” was housed in a separate building across the street from the main fair and consisted of large freestanding screens arranged without booths. Flemish collector Alain Servais told A.i.A. that the new section was “well installed” and “collector-friendly, due to the lack of light, which meant collectors could walk unrecognized over the fair and focus on the art.”

Hof looked especially happy about the participation of Amsterdam gallery Annet Gelink, which had been absent from the fair since 2009 and which presented Defect in Vision (2012), a two-channel, 12-minute video by Meiro Koizumi, as part of “Projections.” Amsterdam’s five-star Andaz Hotel bought two pieces from “Projections,” an edition of the Koizumi piece at Gelink and Keren Cytter’s soap opera satire Vengeance (2012), shown at Zurich-based Schau Ort. Both were donated jointly to the Stedelijk Museum Amsterdam and De Hallen Haarlem.

A highlight of the moving-image section was the world premiere of Hans Op de Beck’s  new video Parade, presented by Ron Mandos (Amsterdam) and available in an edition of 10 for around $34,000. Berlin gallerist Sherin Najjar showed Carlos Irijalba’s Inertia (2012) and sold the third of five editions on the first day for approximately $10,000 to a new Belgian client.

Galleries in the main fair were mostly up-and-coming, and the majority were from Belgium, the Netherlands, Luxembourg, Germany and France. Just over 16,000 visitors attended the fair—a record—with collectors coming from Germany, Italy, France, Belgium and Hungary. Belgian collector couple Wilfried and Yannicke Cooreman walked through with Danish collector Leif Djurhuus, citing Brussels-based artist Xavier Mary’s spray-painted sculpture Love Me Forever (2012), at the booth of Albert Baronian (Brussels), as a favorite. Nadia Fatnassi, of Art-O-Rama a fair in Marseilles, singled out Bruno Botella’s gray hair and silicone sculpture Oborot (2012), available for just over $5,000, at the booth of Samy Abraham (Paris) as a highlight. French visitors were numerous and included fashion designer Jean-Paul Gaultier, who lingered at the booth of Sommer & Kohl (Berlin).

Amsterdam’s Galerie Diana Stigter was very happy with first-day sales. “I think collectors are getting used to the financial crisis and realize that they have enough money to follow their collecting passion,” Stigter told A.i.A. “For some, buying art is almost a compulsion.” She sold works amounting to over $80,000 on the fair’s first day. Ignacio Uriarte’s large-scale, folded-paper wall hanging, titled Double Rhombus (2012), priced at $8,000 in an edition of three, at Figge von Rosen’s booth, was highly praised, and the last edition was snapped up in the first minutes. Dutch gallery Akinci brought one of the most expensive works to the fair: a seven-foot-tall wooden sculpture by Stephan Balkenhol, which received lots of interest at $110,000. Belgian painter Michiel Ceulers’s two large-scale canvases, one at Schau Ort (Zurich) and the other at Juliette Jongma (Amsterdam), each sold for $20,000 on the first day.

And while gallerists were beckoning collectors to their booths, Rodrigo Mallea Lira of Fruit & Flower Deli (Stockholm) was busy closing a deal via e-mail in the adjoining café. He was selling Ylva Ogland’s painting installation (Mirrored Spring), Snöfrid et les contre espaces (2011–13), which was installed in his cordoned-off booth, for $73,000. When A.i.A. asked about the golden chain restricting entrance to the space, he smiled: “When I rent a booth at a fair, I buy myself the freedom to do what I want with it.”