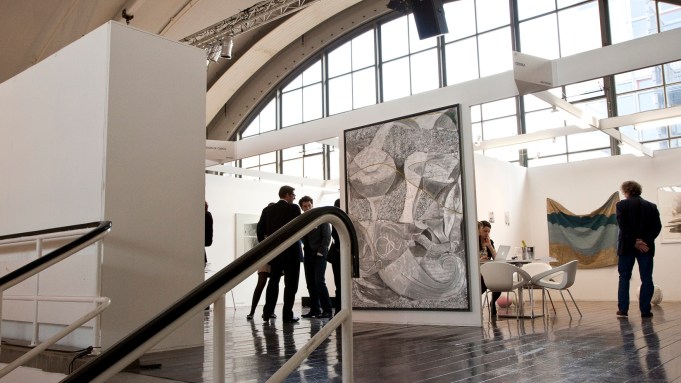 The first in-real-life art fair of the year, Art Rotterdam opened for the twelfth time in the city’s Cruise Terminal, the triple-arched, glass-fronted building from 1949 that used to function as the departure lounge for vacation liner Holland America. 71 booths from nine countries participated, and over one-third of exhibitors were foreign. While tweaking the statistics to advertise it as an international fair by passing off nine Belgian galleries as “international,” Art Rotterdam attracts mostly BeNeLux visitors—with some Germans, French and Italians added to the mix. Although most collectors were Dutch or Belgian, Berlin’s Erika Hoffmann browsed; so did Miami collector Jean Bernard, who reported, “It’s my first time here, but I will definitely return.”

On opening evening Amsterdam gallerist Ron Mandos paced the perimeter of his booth as he closed the deal on a large-scale diptych by German painter Christian Schoeler, the first sale of his rapidly sold-out booth. Hours earlier, Romanian gallery Plan B sold two photographic works by Adrian Ghenie, whose work is simultaneously on show in a solo exhibition at Tim Van Laere Gallery in Antwerp.

Co-founded by dealers Geer Pouls, Fons Hof and Michael Huyser as an answer to growing disappointment among gallerists in the much larger but less international Art Amsterdam 12 years ago, Art Rotterdam is now solely managed by Hof-with the moral support of gallerist-friends Martin Van Zomeren, Julliette Jongma and Diana Stigter.

The entry requirements for the fair are strict, and so Jaap Sleper of Utrecht’s Galerie10 founded Re:Rotterdam, which took place for the first time this year. Although not a serious threat to the big brother art fair, it is noteworthy that Pouls had booked a booth on the counter fair. Due to an opening hours conflict with the host, this second fair took place in a trimmed version, without Pouls’ gallery, Brutto Gusto.

Apart from curveballs by Willem Baars Art Consultancy, which showed an eclectic mix of Mel Bochner and Damien Hirst among others, the galleries honored the fair’s focus on emerging artist. Even veteran gallerist Paul Andriesse brought youngsters like Charlotte Dumas and Marijn van Kreij. To assure the high quality of the fair, every important Dutch gallery with the exception of Annet Gelink participated.

Roos van Put, editor in chief of Dutch art magazine Kunstbeeld and freelance curator Ami Barak, commented: “it’s an improvement on last year, but it’s not a truly international art fair.” Among gallerists, Christina Wilson told AiA, “I don’t feel Art Rotterdam is an international fair, it’s a local environment. Of course it lacks big American collectors, but I get the chance to build up a stronger relationship with local collectors. At bigger art fairs, the Dutch and Belgian collectors have much less time.”