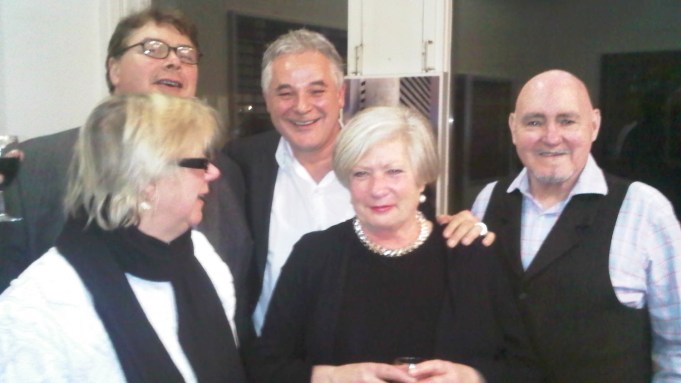 Belgian collectors followed the galleries to the fair, among them big names like Filiep and Mimi Libeert and Wilfried Cooreman. Brussels-based collector Alain Servais went so far as to tell A.i.A., “Without the Belgian galleries, Art Rotterdam would be nothing.” He went home empty-handed, as did the specialized Parisian video collector Jean-Conrad Lemaître. Polish journalist Klara Czerniewska’s said, “I’m surprised that there are hardly any videos to be seen here.”

Galleries from Paris included New Galerie, which showed a stunning sculptural installation by Lizzie Fitch and Ryan Trecartin; and Galerie Torri, who sold out their entire booth within minutes at the VIP opening. The booth consisted of a rather kitschy five-piece painting installation by emerging French artist Jean Baptiste Bernadet, and it went for over $30,000 to Joop van Caldenborgh and his Caldic Collection. London was represented by eight galleries, including Vilma Gold and the newly established Carlos/Ishikawa. Germany added seven galleries to the mix including Peres Projects, which brought colorful paintings by Dan Attoe and Leo Gabin.

With three simultaneous satellite fairs, the crowds were diluted on opening night. A slightly disappointed Micheline Szwajcer told A.i.A., “Somehow I am missing the buzz of last year’s VIP opening.” After selling a series of small-scale charcoal drawings by Renie Spoelstra, Amsterdam gallerist Ron Mandos said he found the calm soothing: “This way we get to spend more time with important clients.”

Dutch art dealer and member of the TEFAF vetting committee Willem Baars got off to a flying start. He sold well over $50,000 worth of secondary market works by Donald Judd, Günther Förg and Joseph Beuys, and Dennis Oppenheim’s 1972 collage Go-Between. A 20 Minute Fist Fight, which was the talk of the fair because it was such a bargain-priced at less than $4,000. On the second day Baars added to his sales a Markus Lüpertz that went for roughly $25,000 to a Dutch collector.

The Stormy Daniels Case Has Left Trump with a Hilarious Dilemma