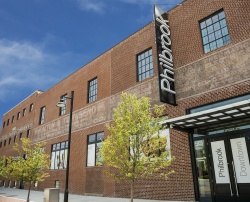 On June 13, the Philbrook Museum of Art, in Tulsa, Okla., will open Philbrook Downtown, a 30,000-square-foot, two-story satellite space in a brick warehouse in the Brady Arts District. Designed in a minimalist, white-cube style by Gluckman Mayner Architects, the New York-based firm responsible for the Warhol Museum in Pittsburgh, Penn., and numerous other art venues, the new galleries will be devoted to the display of modern, contemporary and Native American art, as well as research and programming.

The top floor will hold “Identity & Inspiration: 20th Century Native American Art,” organized by the museum’s curator, Christina E. Burke. Showcasing 150 works from the Museum’s collection, the exhibition will include many objects from the Eugene B. Adkins collection of Native American and Southwestern art, which the Philbrook holds jointly with the Fred Jones Jr. Museum of Art at the University of Oklahoma.

“It’s no secret that our modern and contemporary collections aren’t on par with other institutions around the country,” Ross said in a recent interview with A.i.A. “We’re not in a position to tell the history of modernism, but in some ways, that’s kind of liberating. I don’t have to attempt to do anything chronological or comprehensive.” Given these limitations, “Opening Abstraction” does little to define what “abstract art” actually is-in fact, many of the recently acquired works in the exhibition, such as Robert Rauschenberg’sCatbird I (1971), a cardboard cutout that resembles the shape of a bird spreading its wings, are not abstract at all.

The opening of the Philbrook Downtown is part of a larger renaissance of the Brady Arts District, which until a few years ago was anchored by liquor stores and by-the-hour motels. The museum will share the warehouse with a Woody Guthrie museum, 108 Contemporary art gallery and a rehearsal space for performing arts organizations like the Tulsa Symphony, among many other arts initiatives. The influx of cultural institutions in the downtown neighborhood marks Tulsa’s attempt not only to attract tourism, but also to revitalize the glory the city knew in the beginning of the 20th century, when it was known as the “Oil Capital of the World.”

When the Philbrook Museum was founded in 1939, it was little more than an Italian villa donated by oilman Waite Phillips and his wife Genevieve, who had previously lived in the building. The Phillipses were not art collectors—although they wanted the city to have a fine arts institution, they had very little work to donate to it. It took years to fill the house’s 72 rooms and the surrounding 23 acres of garden, but thanks to donations from patrons including the dime-store magnate Samuel Kress, the museum today has a respectable collection of Native American art, Italian Renaissance and Baroque painting and American portraiture.

In 2007, the institution was bequeathed with the formidable Adkins collection, with a stipulation that it found a space to house it. Tulsa-based philanthropist George Kaiser, the owner of the Bank of Oklahoma and the 33rd-richest American on the Forbes 400 List, rose to the challenge by donating the warehouse. The Philbrook decided to use the space allotted to them not only for the Adkins collection, but also to build visibility for their modern and contemporary art works, which had previously been relegated to a tiny upper-story room at the villa.

“The goal was not to just acquire artists who have a great track record and are in other great collections,” said the Philbrook director Rand Suffolk. “We also wanted to make sure that when people come to visit, they can see themselves reflected in their museum.”

Given that the museum’s audience is more diverse than one might expect-Suffolk says that in 2012, 40 percent of visitors were from a minority population-the inaugural exhibition, “Opening Abstraction,” is careful to cover all bases by including African-American artists such as Theaster Gates and Gary Simmons, female artists such as Louise Lawler, Sarah Bridgland and Rachel Whiteread, and Latin American artists such as Irene Kopelman, whose work Ross first discovered last year at Art Basel Miami Beach. The collection also features artists with connections to Oklahoma, including Lee Mullican, who was born in Chickasha, and Arturo Herrera, who attended the University of Tulsa.

They are joined by a sculptural installation by Josiah McElheny, along with works on paper by heavy hitters like Rauschenberg, Richard Serra and Max Ernst. The drawing by Ernst, a small abstract work, hangs alongside what is perhaps the show’s most daring piece—a video installation by Tony Oursler that features two stacked blobs upon which are projected distorted faces that moan and blink at the audience.

When asked if she was cautious not to offend her audience, which comes from one of the most conservative states in the union, Ross replied: “I don’t want to alienate the audience by putting up something that will be too much in their face.” For example, she won’t be showing Paul McCarthy any time soon. “You have to build up to that kind of thing,” she said.

Although Ross might not have as comprehensive a collection to work with as an institution in a major city, what she does have is the ability to interact with the Philbrook’s incredible Native art collection, curated by Burke, previously of the Smithsonian. Unlike many of her peers, who organize their collections according to region and time period, Burke chose to organize her show by themes: preservation, adaptation, innovation and integration. “I want the audience to ask themselves the question, ‘What is Native art?'” Burke said in an interview with A.i.A.

The collection includes a number of impressive crafts, such as a woven basket by Dat So La Lee (Louisa Keyser), which consists of hundreds of thousands of stitches of tree fibers, and beaded bracelets by Marcus Amerman that feature the Lone Ranger and Tonto. It also features paintings that could hold their own in any major art museum, including some by the Francis Bacon-inspired Fritz Scholder, and his protégée, T. C. Cannon, as well as a lush, gorgeous depiction of a Hopi maiden singing by Dan Namingha.

Tulsa still has a long way to go before it becomes a destination for art lovers-the Brady Arts District still has the eerie feeling of a planned utopian environment that has yet to be fully inhabited. But it’s worth a visit if for no other reason than to see how a museum like the Philbrook can inspire a small population to see the world a little differently.