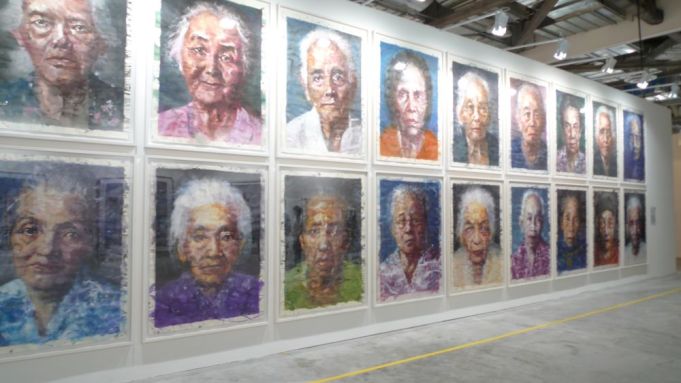 The Art Stage Singapore fair embodies the country’s aspiration to be an international hub for Asia and a cultural bridge between East and West. This year in its second edition [Jan. 12-15], and with the theme “We are Asia,” Art Stage provided a solid overview of Southeast Asian art, as opposed to its primary rival, Hong Kong’s ArtHK, which predominantly presents Chinese artists and global brand names. Ingrid Dudek, vice president and senior specialist of Asian contemporary art at Christie’s, told A.i.A. “What is most distinctive about this fair is the obvious diversity of the different regions that make up Asian contemporary art. The focus is not just on China anymore.”

However, the opening lacked the buzz and sales frenzy many anticipated based on the success of Art Stage’s inaugural event in 2011. The attendance during the four-day event slightly decreased from a reported 33,000 to 31,000 visitors, and dealers reported slow traffic overall and mixed feelings about potential sales. It appears the fair, held in the iconic Marina Bay Sands Convention and Exhibition Centre, has not yet hit its stride.

Art Stage was founded by Lorenzo Rudolf, who directed Art Basel from 1991–2000 and the first edition of Shanghai’s SH Contemporary in 2009. For this year’s fair, he rounded up an impressive selection of 133 galleries, 40 solo projects (doubled from last year), and impressed viewers with a special selection of large-scale works by artists ranging from Antony Gormley and Robert Indiana, to Navin Rawanchaikul and Zhang Huan. Forum-style talks by experts focused on art developments in locales currently “behind China” such as the Philippines, Indonesia, Thailand, India and Japan.

Pockets of sales were reported to have been pre-arranged and confirmed at the fair. By opening night, Paris’ Galerie Perrotin sold all works by Takashi Murakami protégé Mr., including the large canvas Desktop of My Mind (2011), which went for $240,000. Singapore gallery Gajah sold a painting by leading Indonesian artist I Nyoman Masriadi for $350,000. By the second day, Michael Schultz gallery (Berlin, Beijing, Seoul) confirmed the fair’s biggest sale, Gerhard Richter’s Abstraktes Bild (2001) for $1.52 million to a local collector.

Galleries hoped the fair would attract new collectors from regions like Indonesia. “Collectors have not taken this fair seriously,” says Pi Li of Beijing’s Boers-Li Gallery, which represents emerging contemporary Chinese artists. “We did not come all the way here to meet the collectors that we already know [from China]. . .  This year there has been a significant increase in the number of galleries from Southeast Asia, which diverts the attention of local collectors away from the international galleries.”

By the last day, Peter Nagy, director of one of India’s top contemporary art galleries, New Delhi’s Nature Morte, was lamenting the lack of interest in the brightly colored canvases and works by India’s dynamic duo, Thukral and Tagra. “This year there is a different energy. We brought the same artists to the fair last year, and we were very successful. But [this year] it is very strange.”

Alexander Ochs gallery (Berlin, Beijing) took a risk with a large, dark installation by Berlin-based Japanese artist Chiharu Shiota, but balanced out his stand with a variety of more saleable works, including A.A., One Tiger With Eight Breasts (2011), a painting of a nude Ai Weiwei posing with four women by the provocative young Chinese artist Zhao Zhao. A seasoned dealer in Asia, Ochs was optimistic: “In Southeast Asia there is great economic potential, especially for the second and third generation Chinese throughout the region. The art they are interested in mirrors their identity. The darkness of certain subject matter . . . well, for an older generation, they have lived through such darkness and understand it.”

Timing played a part in lackluster sales. Art Stage took place just weeks after the Christmas/New Year holiday and before the Chinese New Year holiday, and overlapped with national elections in Taiwan. Frustrated dealers also attributed the absence of many major collectors to the change in publicity structure of the fair. Promotion of the inaugural event was outsourced to a European PR firm; this year most work was done locally. According to Marlborough Gallery representative Mark Hamment, “There didn’t seem to be any new upgrades to VIP services, and publicity was reduced from last year.”

Art Stage is sponsored by the Singapore Tourism Board, National Heritage Board, the National Arts Council and the Economic Development Board. The Singapore government is heavily invested in cultural development and its mega projects are a signature of the country’s ambitions, as evidenced by the art fair’s surrounding Marina Bay luxury mall, casino and glamorous five-star hotel. The Gillman Barracks compound, a $10 million development of a dozen art galleries and culture outfits, was announced at the fair and scheduled to debut by fall 2012.

Satellite events augmented the art fair and its theme. China’s Sui Jianguo created a stark and startling installation titled Imprisonment and Power at the MoCA@Loewan. In keeping with the fair’s theme, the Singapore Art Museum presented its second exhibition of large-scale contemporary Asian works loaned from private collections.

While the big sales remained largely elusive, some galleries did make valuable contacts with new collectors, and can perhaps follow up with interested parties post-fair. For the rest, it is not clear if this year’s minor sales will justify future participation in such a high-profile fair. With only a handful of six-figure results trickling into the press office, the overall sentiment among dealers was that they might have had better odds in the casino next-door.

KATHERINE DON is an art advisor based in Beijing and New York.