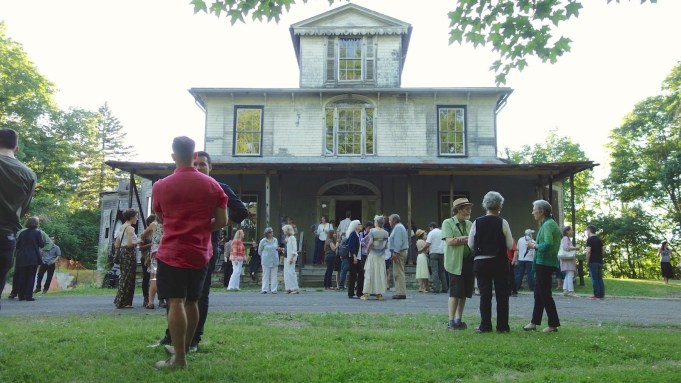 New York State’s Hudson Valley is known for its grand old mansions, some haunted by storied pasts. One such place is currently filled with art courtesy of Kiki Smith, her sister Seton Smith, and Valerie Hammond.

The Dr. Oliver Bronson House, built in 1812 on the southwestern edge of the small town of Hudson, N.Y., overlooking the river, is a once-resplendent home that became a reform school for girls in the 1920s-notably attended by Ella Fitzgerald-and eventually part of a prison complex. Built for businessman Samuel Plumb, who owned a fleet of tugboats, the house was redesigned for Bronson in 1839 by Hudson River School architect Alexander Jackson Davis.

The derelict structure standing today was declared a National Historic Landmark in 2003. But representatives of Historic Hudson, Inc., an organization dedicated to preserving the area’s cultural heritage, say that within three years the building will likely collapse without repairs estimated to cost $475,000.

When Hammond and Kiki Smith proposed an exhibition in the space, Historic Hudson green-lighted the project to help raise funds and bring awareness to the restoration project. “Three Artists at the Dr. Oliver Bronson House” (on view through June 15) nearly fills the sprawling, three-story mansion.

The exhibition features sculptures and works on paper by Hammond, large-scale multipanel drawings by Smith and photographs by her sister, Seton. Set against crumbling walls, Kiki Smith’s images of like-size figures and Hammond’s sculptures of disembodied female figures in elaborately patterned dresses and gowns suggest ghostly presences occupying the forlorn spaces. Meanwhile, Seton Smith’s large soft-focus photos of other Hudson Valley buildings complement the many refined Federal-style details at Bronson House that have survived, albeit in precarious condition.

“The show came together rather serendipitously and quickly,” Kiki Smith told A.i.A. in an interview at the opening. “There wasn’t much pre-planning and we had only a few days to install. Because of the fragile condition of the building, we had to be very careful about how everything was placed and hung.”

“The greatest challenge was finding solutions to hanging work on the ancient plaster walls,” Hammond added. “Finally, we discovered Gator Board! Slowly the house itself began to inform the installation. We began to look for the flaws and the decay that worked in concert with our pieces.

The show’s opening drew more than 250 people, a sizable turnout for this small community. Plans to present more exhibitions and art events at the site are under way.

UPDATE: The closing date for this exhibition was changed after the publication of this article, and an admission fee was eliminated. This article was amended to reflect these changes.