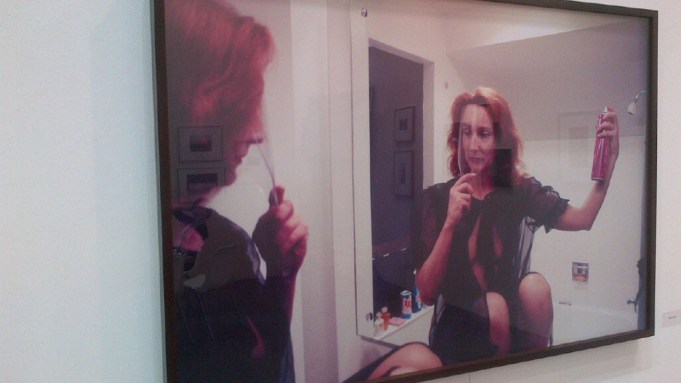 The fair, founded in 1993, is better known for its conceptual bent and innovative booths than its market share. A new director, Sarah Cosulich Canarutto, focused on collector and dealer outreach to boost sales without compromising quality.

“It’s the first time I have been invited,” Belgian collector Frederic de Goldschmidt told A.i.A. London-based collector Jean-Conrad Lemaître told said this was “the first time in many years that we return to ARTISSIMA.”

“I have a feeling that there are more high quality collectors around this year,” said Javier Peres of Peres Projects (Berlin) who has been in seven editions of the fair. He was sitting in his booth under Mark Flood’s large, tongue-in-cheek painting Boring Conceptual Crap (2012), which sold on the fair’s second day to an Italian collection for $50,000.

Peres was one of 26 German galleries, the country fielding the most fair exhibitors, although Berlin big-guns who had participated in the past—Galerie Kamm, Carlier Gebauer, Johnen Galerie and Wentrup—did not return.

Within the first hours of the VIP opening, Bökur Arnarson, director of i8 (Reykjavik) had sold Olafur Eliasson’s spectacular Duo-colour Double Polyhedron Lamp (ed. 1 of 10), 2011, one of the Icelandic artist’s large-scale mirrored lamps, for $95,000.

Kalyfayan’s display of a 1968 fluorescent sculptural installation by Egyptian artist Constanin Xenakis was the most buzzed-about highlight of the fair’s “Back to the Future” section, a separate solo booth presentation  for lesser-known artists.

In the other special solo booth section, “Present Future” Yvon Lambert’s presentation of works by New York-based artist Nick Van Woert stood out. He showed three abstract black and white sculptures that examined the idea of the work’s base, two of them including forms suspended in metal geometries.

They offered Wilhelm Sasnal paintings and a quirky 2012 mobile-installation by German artist Kitty Kraus, Untitled (LIDL Stick) priced at $22,000, consisting of the handle of a shopping cart whizzing about on its own axis at a considerable speed.

The forthcoming changes planned for Milan’s art fair MIART for April 2013 was a hot topic among dealers. With some major Italian galleries notably absent-Milan’s Giò Marconi and kaufmann repetto-both selection committee members for the Milanese effort- the pressure is mounting for ARTISSIMA to perform. This year, it did.