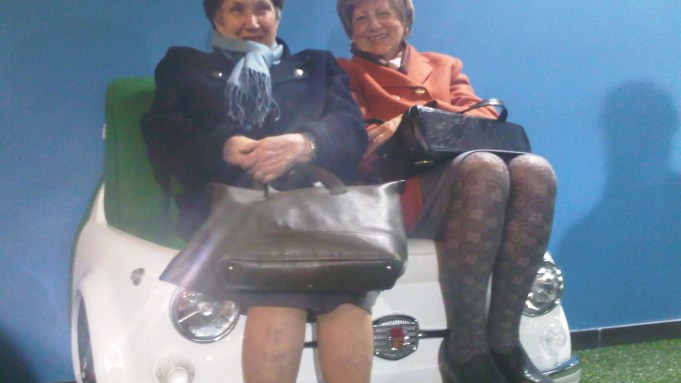 Rainfall dampened spirits at the 18th edition of ARTISSIMA, the top Italian contemporary art fair that took place in Turin last week. As the water level of the city’s Dora and Po rivers rose dangerously over the weekend, the footfall of collectors dwindled to a trickle. Already, the fair is not known for impulsive first-day purchases. Putting on a brave face, one dealer told A.i.A., “sales were slow” and “down from last year.” All this despite the fact that the roster of participating galleries has continued to improve and the quality of the booths was excellent.

There were some bright spots. Fair first-timer Casey Kaplan, who’s already been selected to the fair committee, was beaming. The New York dealer sold works by Diego Perrone for over $40,000 to Turin’s CRT Foundation for Modern and Contemporary Art, which still has enough money during the financial crises to free up roughly $825,000 for a total of 23 purchases.

Regional collectors stopped by, like Patrizia Sandretto Re Rebaudengo, a longstanding supporter of ARTISSIMA, who returned from the opening of Maurizio Cattelan’s New York Guggenheim show to browse the fair on its final day. Rebaudengo revealed to A.i.A. that she had her eye on works by Marianne Vitale at London’s IBID Projects and was also going to visit the booth of Gregor Podnar (Berlin, Ljubljana). Berlin collector Wilhelm Schürmann bought work by Soshi Matsunobe at Super Window (Kyoto), praising the fair’s “relaxed atmosphere—viewing complex art takes time.”

While ARTISSIMA is touted as “emerging,” dealers were not afraid to bring more expensive works to the fair. Frankfurt’s Anita Beckers presented a solo show of work by conceptual artist William Anastasi that included a small-scale iron floor sculpture, Sink, 1963 (2011) (edition of 3), for $250,000. Lia Rumma (Milan, Naples) showed drawing-videos by William Kentridge, including the approx. 11-minute-long Other Faces (2011), which, in an edition of 12, still cost an unbelievable $330,000, along with his Invisible Mending (2003), a unique hour-plus long video for $600,000. For those whose pockets were not so deep, Chert from Berlin showed The best fisherman is not the one who catches the most fish but the one who enjoys fishing the most (2011), a series of ambiguously shaped neon wall sculptures in an edition of 30 by Swiss-born artist Vanessa Safavi for $450 a piece.

“The Others,” the first edition of a spin-off fair organized by Roberto Casiraghi—one of the original co-founders of ARTISSIMA 18 years ago—failed to attract major support, despite a wonderful location in the city’s old prison. Casiraghi was happy to dish out criticism for ARTISSIMA, telling A.i.A. that “‘the other’ fair has no energy.”