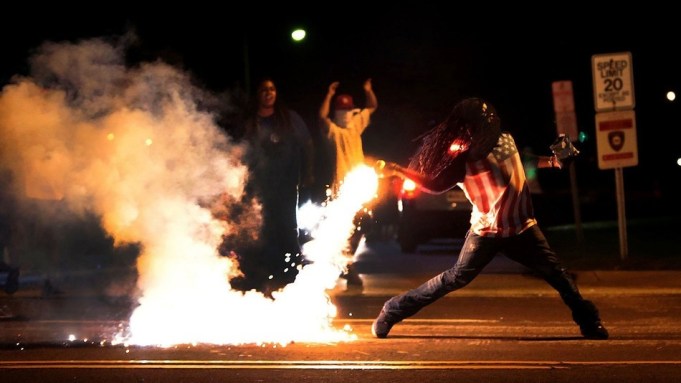 The St. Louis arts community has been active in response to the fatal Aug. 9 shooting of unarmed black teenager Michael Brown by a white policeman in Ferguson, Mo. The shooting has been followed by mostly peaceful protests. Local police have employed armored vehicles, tear gas, rubber bullets and flash grenades.

“This city is being ripped apart,” gallery owner Philip Slein told A.i.A. in a phone interview Monday. “A chasm is developing in this already incredibly racist state.”

“Both visual and musical artists are involved,” painter Cbabi Bayoc told A.i.A. on Monday when reached by phone. “Being onsite [at the protests], you see a lot of people you know in the [arts] community. We may not be producing anything now, because we’ve been so consumed by what is going on. But a lot of art is going to come out of this.”

“Many arts people have been coming out,” said artist Dail Chambers, “such as poet Elizabeth Vega, and Danny and Kevin McCoy of print and design studio Work/Play, political activist/community artist Montague Simmons and sculptor and installation artist Simiya Sudduth.”

To put Brown’s shooting in historical context, Slein and others pointed out race-related episodes of national history that have centered on the state, including the pro-slavery Missouri Compromise in 1820 and a landmark 1852 decision in the Dred Scott case, in which the State Supreme Court ruled that Scott must remain a slave although he was legally entitled to sue for his freedom. Ferguson, a suburb of St. Louis, is majority black but has only a handful of police officers of color.

Artist Dail Chambers, cofounder of the Yeyo Arts Collective, is spearheading the creation of a quilt made of one-foot-square panels contributed by community members. Several dozen people have made submissions, which include a stitched poem and a collage of African fabrics.

“I was thinking about the Underground Railroad, the Freedom Fighters and African-American iconography,” Chambers told A.i.A. by phone on Tuesday. “A lot of people consider St. Louis the Midwest but a many people here are from Mississippi and Arkansas, so it’s really like the Upper South here.”

Documentary photography has, by Slein’s account, been the most visible product of the conflict.

St. Louis Post-Dispatch photographer Robert Cohen’s dramatic shot of a protestor, wearing an American flag T-shirt while lobbing a burning tear gas canister that police had fired at protestors (and, incongruously, holding a bag of chips), is one early icon of the protests. (The man hurling the canister, who goes by @eyeFLOODpanties on Twitter, has said he was throwing it not at police, as has often been stated, but away from children who were at the protest.) The photograph has spawned numerous riffs by artists and designers, as noted in a Mashable article.

The St. Louis Regional Arts Commission held a public discussion as early as Aug. 13, attended by over 80 area artists and activists.

“A lot of us have provided art supplies to those making signs,” De Andrea Nichols, education assistant and outreach coordinator at the Contemporary Art Museum St. Louis, told A.i.A. on Monday.

Local arts people are informally talking about exhibitions of work to emerge in response to the mayhem, said Roseann Weiss, director of community and public arts at the Regional Arts Commission.

“Mostly the strongest visual elements have been on T-shirts,” Bayoc told A.i.A., adding, “I think all the visual propaganda is still coming.”

“Many people in the arts community are coming forward for justice for Michael Brown,” Slein said. Although he has yet to encounter much work produced in response to current events, Slein says, “we are going to see art come out of this.”

“Absolutely I’m going to make work based on what is going on,” Bayoc told A.i.A. “I’m geared up and ready.”