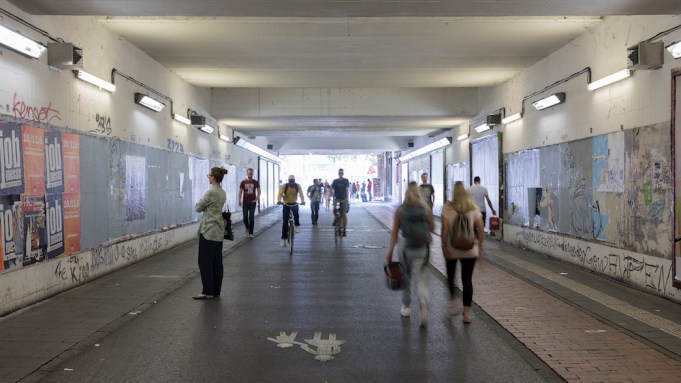 Conceived by Klaus Bussmann, curator at what was then called the Westfälisches Landesmuseum für Kunst und Kunstgeschichte, and greatly assisted by the young Kasper König, the first Skulptur Projekte Münster, held in 1977, was a pioneering exhibition in an unlikely location: a midsize, predominantly Catholic German city often hostile to modern art. Artists including Donald Judd, Richard Serra, and Joseph Beuys were invited to present sculptures not in museums but in parks, outside buildings, and alongside waterways. This provocative and controversial exhibition became an event occurring once a decade, and it’s now intrinsic to Münster’s identity. Commissions for past editions are part of the city’s fabric, weathered treasures that residents and visitors encounter as a matter of course. Skulptur Projekte Münster has changed quite radically since its initial incarnation. It’s much more eclectic, encompassing sculpture but also performance, sound art, video, and other mediums. Yet it remains focused on artists, and committed to realizing works in the city, where they can be viewed free of charge by a broad public.

For this fifth edition, König, now the artistic director, and curators Britta Peters and Marianne Wagner again invited artists to Münster to respond to the environment. For the first time, some works are also in Marl, a smaller city about thirty-five miles away. The result is a lively, choppy, unpredictable affair. For Not Quite Under_Ground (all works 2017), American Michael Smith set up a tattoo parlor offering designs by current and past participants in the Sculpture Projects (as well as local tattoo artists), with generous discounts for customers aged sixty-five or older so that seniors might be enticed to take part in a rite of youth culture. Nigerian Emeka Ogboh has installed an entrancing sound piece in a tunnel near the train station. It evokes the blind, eccentric New York street performer and composer Moondog, who in the late 1990s moved to Münster, where he is buried. Seeking out the thirty-five projects dispersed throughout the city on foot or by bicycle feels like a free-spirited adventure.

At the LWL-Museum für Kunst und Kultur (that’s the renamed and rebuilt museum where Bussmann once worked), German Gregor Schneider has built an unsettling yet deeply compelling warren of rooms, and presented it as the residence of the enigmatic and unseen N. Schmidt, a fictional character who recurs in his work. Schneider wants each viewer to be alone in his work. You climb the stairs to meet an attendant who crisply indicates the door and offers no further guidance. Once inside, you move through a series of spare, white rooms. In one, something ominously bulged on a windowsill behind a semi-opaque white curtain. I peeked (not knowing if it was allowed) to discover a vase of flowers. Another room features a television showing a surveillance video of one of the other rooms. There are too many doors, some locked, some with prominent alarms. I went through one, thinking it was the exit, only to end up where I started––or so I thought. Schneider’s installation involves two sets of identical freestanding rooms, mirror images of one another. The repeating white rooms––so normal but also askew––can make you feel trapped and disoriented.

From there, it is easy to discover works in the picturesque downtown area. The ornate Friedenssaal––where the Treaty of Münster was signed in 1648, putting an end to the bloody Thirty Years War––is the striking setting for Romanian Alexandra Pirici’s performance Leaking Territories. Twelve performers, speaking in turn, solemnly connect the room to distant places and historical events, among them the 2011 occupation of Cairo’s Tahrir Square, the Haitian Revolution, Neil Armstrong landing on the moon, and the Warsaw Ghetto. The performers array themselves in exquisite formations, making complex temporary sculptures. Irish artist Gerard Byrne’s lush, intensely cinematic video and sound installation In Our Time is in a downstairs room in the public library. You see a radio DJ in his control booth as he slides in and out of character, leaning into the microphone to banter, make quips, and announce songs, and then becoming thoughtful and private while the songs play. When he reads the news it’s surprisingly from the 1980s. The control booth suddenly seems mobile in time––partly in the present, partly in the past.

Venturing beyond downtown is a big part of the exhibition’s charm. Argentina-born New Yorker Mika Rottenberg’s reeling video Cosmic Generator, which spans Chinese restaurants in cities on both sides of the U.S.-Mexico border and explores imaginary tunnels under the border, is in a small, out-of-the-way building that until recently held an Asian grocery. One morning I hopped on my rented bike to ride three miles or so out to Sternbusch Park, searching for Icelander Hreinn Friðfinnsson’s outdoor sculpture. It’s the latest in a series of works he has been making for the last forty years; the first was installed in an Icelandic field of hardened lava. This new work, fourth house of the house project since 1974, is quietly stunning. It’s only the skeleton of a small house made from highly polished stainless steel. While rigid, it seems almost ethereal, blending with, reflecting, and dissolving into the landscape.

Pierre Huyghe‘s epic archaeological dig-slash-biodiversity lab After A Life Ahead, in a cavernous indoor ice rink that closed in 2016, also requires a considerable trip. Chopping and digging through the floor of the rink into the earth, Huyghe and his team fashioned a hilly landscape that fuses raw nature with cultural artifacts, and geologic time with our current moment. As you walk through and are enveloped by this environment, you realize that other life forms also inhabit it. Chimera peacocks might be hanging out on a rafter, and bees could be issuing from the big mounds where they make their hives. Algae and bacteria also live in the work. Download the accompanying app on your smart phone, and you can see an augmented reality of hovering black forms, supposedly generated by growing cell cultures. It’s a thrilling blend of nature, biology, geology, and technology, realized with a brilliant sculptural acumen.

While Skulptur Projekte Münster is ably curated––with some works, like Huyghe’s, of the miraculous sort––curation is not the focal point. Art is, and this is what makes the exhibition so refreshing. This exhibition coincides with Christine Macel’s sprawling Venice Biennale and Adam Szymczyk’s gigantic Documenta 14, in both Kassel and Athens. While these two shows substantially differ in terms of themes, both continue a longstanding trend in which teeming international exhibitions are ultimately more about curators and their sociopolitical ideas than artists. That’s not the case with Skulptur Projekte Münster. Artists with their peculiar visions and idiosyncrasies are front and center.