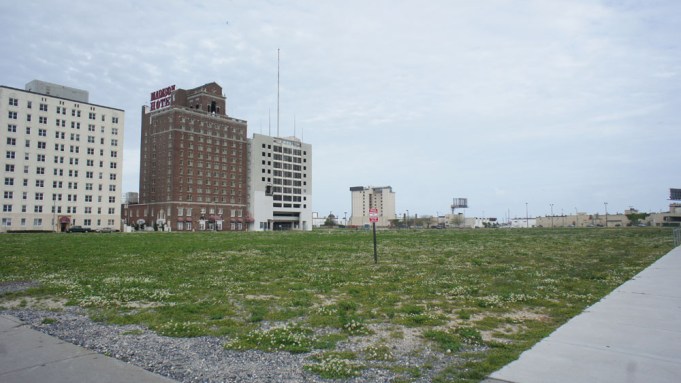 When independent curator Lance Fung was approached by the Atlantic City Alliance (ACA) in March 2012, he was skeptical about getting involved with Artlantic, an ambitious public art project set in a coastal town better known for casinos and beauty pageants. The aim of the project was to convert disused lots into green space that would host art installations. During early visits to the gambling mecca, Fung—best known for curating the 2008 SITE Santa Fe biennial and for elaborate Olympics-related projects in Turin (2006) and Beijing (2008)—was keenly aware of its lack of public space. “There were no roses to stop and smell, nothing green,” he said during a presentation in Atlantic City last week. “There was some nature, but it had been squeezed out by urbanization.”

The ACA, in partnership with the Casino Reinvestment Development Authority, provided Fung Collaboratives (the bi-coastal arts organization Fung founded in 1999) with two plots of land. Artlantic’s main site is a rundown 7-acre rectangular plot a few blocks inland; it also has an 8,500-square-foot site located about three-quarters of a mile down the boardwalk. (The latter is now home to John Roloff’s geometric black, white and gray mural, which served as backdrop for a performance by the Atlantic City Ballet and daily zumba classes.)

By September 2012, Fung’s team began renovating and landscaping the larger site, turning the scrubby lot into a park complete with gravel and crushed-shell pathways, fields of sea grass and plantings of other native flora. A raised figure-eight-shaped ridge snakes through the lot, partially obscuring the unlovely view of casinos, cash-for-gold shops and adult video stores that dot the nearby streets.

Later last fall, most of the artwork arrived on site. Ilya and Emilia Kabakov have installed Devil’s Rage (2012), a wooden pirate ship that appears to be sinking into the grass. Kiki Smith plucked a bronze sculpture of a woman embracing a deer from her own garden, telling Fung that she’d always dreamed of surrounding it with all-red flowers and plants. Robert Barry revisited a project that, due to budget constraints, he wasn’t able to realize with Fung in Beijing: 23 illuminated words, including “IMAGINE” and “BECOMING,” installed face up in the grass. This spring, Peter Hutchinson performed a series of thrown rope actions; the shapes in which the ropes landed indicated the wavering line along which clusters of boulders, hedges and flowers would be installed. Two younger local artists also have sculptural works on site—Robert Lach contributed colorful fiberglass and polyester bird nests and Jedediah Morfit Victorian-style garden furniture in brushed aluminum.

Both spaces are privately owned by gaming corporations who have donated their land “until alternate private investment opportunities arise”; the artworks are loaned by the artists and have not been acquired by ACA. Hopefully the much-needed green space that Artlantic provides won’t be too short-lived.

Stream and Save: Amazon’s 4K Fire TV Stick Is Marked Down to Just $24