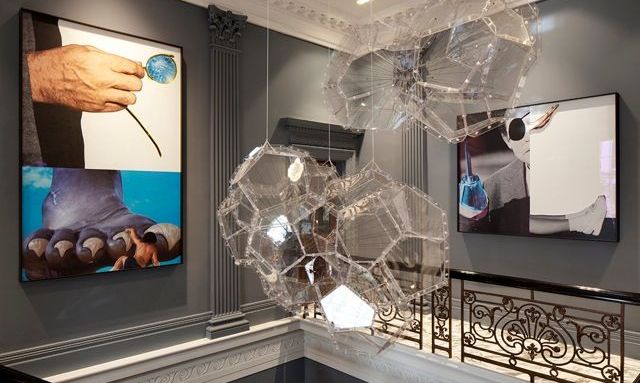 This fall saw the unveiling of a major redesign for the Arts Club of London. Founded in 1863 by, among others, novelists Charles Dickens and Anthony Trollope, and once frequented by such prominent figures as Oscar Wilde and Auguste Rodin, the Arts Club was the epicenter of London’s art and literary scenes, closely tied to the Royal Academy.

Under the ownership of developer Gary Landesberg and restaurateur Arjun Waney, the venerable institution recently underwent six months of refurbishment. Though select works from the club’s historical art collection remain on view in the library, the building has been revitalized by a new permanent art collection, curated by art advisor Amelie von Wedel, and a fresh contemporary look by interior designer David D’Almada. Prince Philip, Duke of Edinburgh, attended the grand re-opening festivities on Oct. 5.

Two front rooms will feature changing exhibitions, kicking off with a show of works by Chicago-based sculptor Theaster Gates, in his first European exhibition. Artists permanently on view include Malick Sidibé, Laurie Simmons, Albert Oehlen, Rebecca Warren and Allan McCollum, each part of what Wedel described to A.i.A. as “a global collection for a global world.”

Throughout the club, Wedel strives for cohesion. “If you go into a hotel or restaurant where you can see art, it’s often quite random,” she said. “We dedicated certain areas to one artist or even commissioned artists to create whole rooms.” She has hung three of the building’s five floors, and will run the exhibition program for the next year while continuing to acquire new work for the permanent collection. “There’s still a lot of empty rooms, because we’re waiting for the right artists.”

The glitterati are likely to flock to the basement nightclub, Club Nouveau, run by celebrity musician and deejay Mark Ronson and sure to be a high-profile addition to London’s nightlife scene. Art enthusiasts are invited to make an appointment to view the new collection, which is open to the public on Wednesday and Saturday mornings.