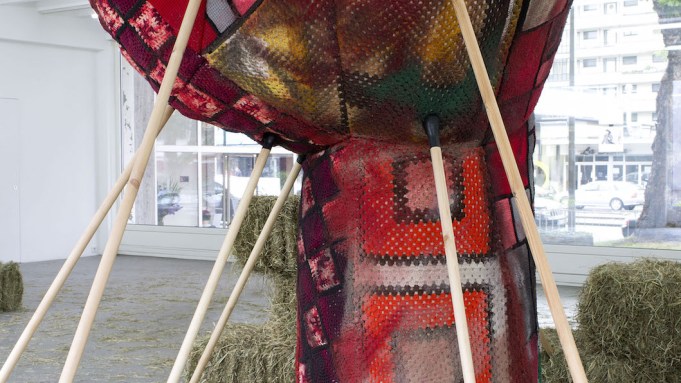 “Don’t mind me,” director Mark Loiacono of New York’s Lisa Cooley Gallery told A.i.A. “I’m a little sweaty because we were showing Scott Reeder’s ‘landlord’ paintings to collectors in the lobby before the preview started.” The large canvases are slathered with rollered-on paint to evoke a vacated apartment freshly re-painted by the landlord’s crew.

With many works at more affordable prices than those at the main Art Basel Miami Beach fair, NADA is known for attracting younger patrons. For example, in his baggy red Nike shorts and Teva sandals, Jacob Olar doesn’t look like the average collector.

But then, Jacob is seven years old.

“How much is that?” he asked a dealer Thursday morning, his voice barely audible.

Encouraged by his father, Chicago collector John Olar, Jacob was inquiring at the booth for Tokyo’s Mujin-To Production. What caught his eye was a work by Tokyo artist collective Chim Pom: a video accompanied by a stuffed rat, dyed yellow, standing on its hind legs in a jaunty pose, resembling the wildly popular Pokémon character Pikachu. The price was $7,000 and this would have been Jacob’s first purchase, he told A.i.A., but this particular rat was spoken for. “When a new one becomes available, though, we can let you know,” the gallery’s Yukiko Kakiuchi told Jacob.

Walking the aisles along with collectors like Susan and Michael Hort and Jill and Peter Kraus were curators such as Stuart Comer and Christopher Y. Lew, both with New York’s Museum of Modern Art, the New Museum’s Massimiliano Gioni and his wife, High Line curator Cecilia Alemani. Curator Hans Ulrich Obrist of London’s Serpentine Gallery, profiled in this week’s New Yorker magazine, was also on the prowl.

But it’s not all just sales in Miami this week. There was also the opening of a (sort of) new museum and shows organized by private exhibitors like the Rubell Family Collection, which open their doors to the public with new offerings each December. Also lighting up Miami was a restaging at the Miami Grand Theater of New York artist Ryan MacNamara’s popular 2013 Performa commission MEÆ?M: A Story Ballet About the Internet.

Amid all the blithe shopping and celebrating, you might not even notice that the country is in the midst of a wave of protests nationwide over the failure of a Staten Island grand jury to indict police in the fatal arrest of Eric Garner.

That context lent an unexpected resonance to some works on view away from the fairs, at the Institute of Contemporary Art (ICA) and the Rubell Collection, which echoed current events by evoking icons of protest.

On Tuesday night, the ICA Miami launched inaugural shows of Pedro Reyes and Andra Ursuta (through Mar. 15, 2015) in its temporary digs at the Moore Building in the Design District on Tuesday. Formerly the Museum of Contemporary Art North Miami, the new institution arose out of a clash over control of the museum’s programming between the board and the city government that owns its home. After lawsuits and countersuits, a settlement was reached by which the board took parts of the museum’s collection and decamped from North Miami to Miami proper.

Museumgoers view the majority of Ursuta’s impressive show, “As I Lay Drying,” from balconies on the three upper floors that surround an atrium. The open space is crisscrossed at each floor by white metal beams; on these existing structures sit drywall constructions that simulate the corner of a room, with floor and two adjoining walls. Each houses a sculpture.

Among the largest pieces is the inflatable Soft Power (2013), about 10 feet high and made of quilted comforters. It takes the shape of a fist upraised as if in protest. The work’s title refers to the kind of power that nations exert through cultural exports rather than military force, while the fist recalls the Black Power salute.

The inflation and deflation of Ursuta’s raised fist suggests a vacillation between outrage and impotence—sentiments now widely felt by those who see a pattern of police violence and racial prejudice in the cases of Garner, Michael Brown in Ferguson, Mo., and others. In that sense, the work encapsulates the irony of a glitzy trade show unfolding as protesters staged a die-in in Grand Central Station and blocked traffic on several New York bridges.

The largest room is devoted to a single-work exhibition by Dodd, a New York artist. Dominating the room is a canvas, about 11 by 25 feet, which replicates the dimensions of Picasso’s Guernica. Viewers encounter the rear of the painting as they enter. Sitting on a tiny mound of sand on the floor behind it is a stuffed doll of the Spaniard: Picasso at the Florida beach.

On the painting’s front, the imagery that defines Guernica—civilians and animals bombed during the Spanish Civil War—is replaced by an abstraction. Well, kind of. A giant pink vertical slash at the painting’s center unavoidably suggests a vagina. It’s flanked by tan expanses that resemble spread legs. The female anatomy evokes the Spanish artist’s legendary womanizing, while the color scheme of the remainder of the canvas offers a link to Picasso’s original subject: expanses of smoky black and ashy gray and brown suggest the aftermath of a bombing run. Picasso’s 1937 painting served as an impassioned protest against state violence aimed at civilians, and so, if only in its point of reference, Dodd’s painting resonated with the marches and die-ins that swept cities from New York to San Francisco this week.

Those protests did not come to Miami Beach, so it was left to politically inflected work to editorialize.

Art Basel fair’s Public section, an outdoor display in Collins Park, was curated by the Public Art Fund’s Nicholas Baume. Baume’s show, “Field Work,” includes works by artists ranging from Georg Baselitz to Hank Willis Thomas and focuses on “the potential for public art to challenge artists and viewers.” One of the most visible works, a large neon sign by Chilean-born, New York-based artist Alfredo Jaar, reminded visitors what was mainly at stake in Miami this week.

UPDATE: Friday evening, after this article was posted, protestors took to the streets in Miami, shutting down Interstate 95 for hours, the Miami Herald reports.