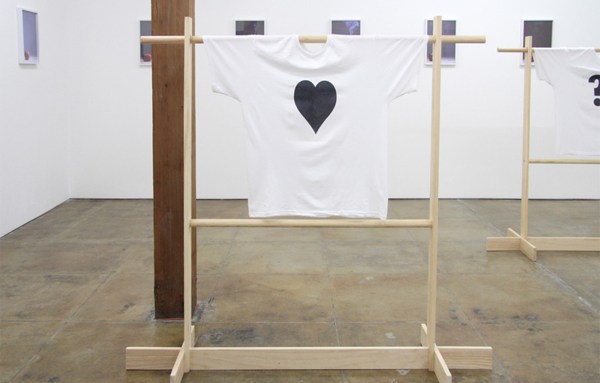 Asher Penn tends to upload images of his new bodies of work to the Web like leaked tracks of a pop singer’s forthcoming album, publishing them on his own site sometimes more than a month before the show’s opening. He did just this for his latest exhibition, “The Banana Question,” at Young Art, Los Angeles [through Jan. 22] that comprises three mixed-medium sculptures, a series of photographs, and 10 books of ink drawings (all works Untitled, 2011). The young, New York-based Penn is skilled at manipulating the devices that frame a work’s content—his website, for one, and the installation here, which resembles a retail storefront window, with its displays of shirts, stock photographs and books for sale.

The artist has periodically showed selections from his collection of extra-large T-shirts. At Young Art, the artist drapes the shirts, printed with catchphrases or symbols, over three wooden kimono stands, a technique typically used for tapestry display. While suggesting a craft store, the stands give the shirts a sculptural quality. They move as air circulates through the room. Penn cited as inspiration HYPEBEAST, a blog that features retail apparel and accessories, marketed to young male skateboarders. He attributes his interest in the site to its fetishistic attention to limited edition, color and theme as a “personalized co-option,” in which consumption is customized for a demographic that prides itself on independence.

The symbols printed on each T-shirt-a heart, a question mark, a swastika-recur in Penn’s work in varying formats and colors. In 2007, hearts appeared on T-shirts resembled body prints by their crude outlines; later, in his “Heart Paintings” (2009), they were formed from flush backgrounds surrounding fashion photographs. Here, the artist has pared these forms down to black on white cotton, like characters on a screen.

Writing to the early Op artist Victor Vasarely in 1952, Le Corbusier declared, “The destiny of the tapestry of today emerges: it becomes the mural of the modern age.” The mural is important, he continues, for its ability to be carried under one’s arm, becoming the mobile painting of the nomad. For Penn, these shirts are the murals that allow his work to circulate in a gallery, on the Internet and on the street.

Along three walls in the gallery hang 13 photographs, each an image of an apple and a burning incense stick that smokes against a white backdrop. The artist captured the smoke’s changing contours by varying exposure times and lighting from behind, which creates a sense of movement across the series. This adds a living, breathing dynamism to the still life. That quality is deeply embedded in Penn’s approach to art-making, which emphasizes transparency. Explains Penn, “Most of what I work on is oriented towards some kind of relaxation towards process and production, of taking the pressure off of the individual work, embracing variation, and not editing, which is supposed to come closer to life in general.”

By leaving bodies of work unedited and presenting them in full, Penn teases out subtle differences in forms. His longstanding series use repetition and open-endedness in a marketplace that sets its premium on new and signature styles. He has compiled an exhaustive 1,500 ink drawings of a simple facial profile into 10 bound books, which sit atop a plain white table against a wall in the gallery. Each unique profile, drawn with one line, is a slight alteration of the one on the previous page. The artist likens producing these to “breathing or walking down the street or talking to someone.” All 1,500 drawings are available on his website.

These Are the Best Mattresses to Buy on Amazon, Based on Customer Reviews