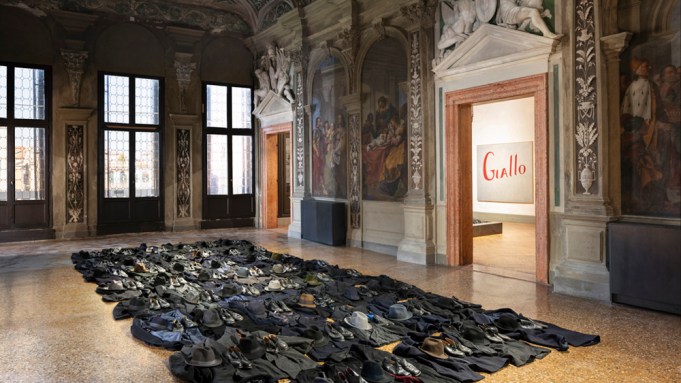 The central exhibition and the national pavilions at the 58th Venice Biennale offered few surprises; visitors might find more rewarding fare at the stunning collateral exhibitions across the city: “The Nature of Arp” at the Peggy Guggenheim Collection through September 2; “Pittura/Panorama: Paintings by Helen Frankenthaler, 1952–1992,” at Palazzo Grimani through November 17; Arshile Gorky at the Ca’ Pesaro through September 22; and Yun Hyong-Keun at Palazzo Fortuny through November 24. Each of these shows offered unexpected works by familiar names—Frankenthaler’s shockingly representative Pink Bird Figure (1961) alone might be reason enough to make the trip to Venice.

I’m not sure what it says about the timeliness of the Venice Biennale, or the excess of biennials in general, or fatigue with the “what’s happening now” format, but all the best shows in Venice this year feature artists who are dead.

In the fifteenth-century church of Santa Maria della Visitazione in Dorsoduro, overlooking the Giudecca, the Vanhaerents Art Collection presented “The Death of James Lee Byars” (on view through November 24), a restaging of the late artist’s performance of the same name, originally presented at Galerie Marie-Puck Broodthaers in Brussels on July 1, 1994. Byars created the work while dying of incurable cancer (to which he succumbed in 1997). He did not leave any instructions specifying the work’s dimensions; its only remnant is a certificate, as stated in the Venice exhibition’s catalogue, “on red parchment paper, it had the title in the artist’s characteristic poetic handwriting, overgrown with dozens of little stars. It was a puzzle to unravel.”

At the front of the church’s nave, the curators have installed a soaring cube open on one side to face the altar. Under a ceiling painted by Pietro Paolo Agabiti with fifty-eight saints from the Old and New Testaments, the interior of the cube is plastered with thousands of sheets of gold leaf, each imperfectly installed to allow its edges to flutter as visitors move throughout the space. “Gold is religious and it’s alchemical,” Byars once said. “It’s such an abstract and unusual color to experience in a very large scale.” A simple funeral bier, also covered in gold leaf, is positioned on the cube’s floor and topped with five Swarovski crystals—Byars referred to them as diamonds—where the hands, feet, and head would be.

Lebanese composer Zad Moultaka’s Vocal Shadows (2019) accompanies the installation, a requiem mass for the gilded funeral. Moultaka’s spare, atmospheric score is played through sixteen elevated speakers along the church’s central aisle. The overall effect is both poignant and self-consciously theatrical. On the whole, Byars’s art seems too considered (and witty) for any of his works to be bound by one overtly sentimental reading, and the presentation, while earnest, also recalls a line from “The Immortals,” a short story by Jorge Luis Borges: “Death (or its allusion) makes men precious and pathetic.”

Further north up the Grand Canal, Fondazione Prada at the Ca’ Corner della Regina, presents the first major posthumous survey of Greek artist Jannis Kounellis (1936–2017), on view through November 24. Curated by Germano Celant and organized in collaboration with the Archivio Kounellis, the exhibition spans the second and third floors and includes artworks dating from 1959 to 2015. A central figure in the Arte Povera movement, Kounellis gifted newfound gravity and a spartan elegance to quotidian objects such as coffee grounds, men’s suits and hats, wardrobes, and coal. Here his works lie on terrazzo floors, hang from rafters, and block doorways. The juxtaposition of the humble materials and the baroque palazzo is beautifully composed.

Fire and soot are dominant elements throughout the exhibition, from blackened fragments of classical sculptures to residual burn marks on plaster walls. A handful of pieces are regularly activated with blowtorches. An untitled 1967 sculpture consisting of a graphic floral form in steel lit occasionally at the center by a blue propane flame is both forbidding and playful. Even when it isn’t on, the torch’s bright-blue canister transmits an ominous promise of combustion. The exhibition is further enlivened by artworks that include classical musicians: a cellist plays in one gallery, and a flutist performs in a stairwell. The score, sometimes repeating the same musical phrase again and again, echoes and dissipates throughout the palazzo’s many ornate rooms and corridors.

As in “The Death of James Lee Byars,” gold leaf is used here to striking effect. A maximal example is Kounellis’s installation Untitled (Civic Tragedy), 1975, which positions a simple coatrack bearing a black overcoat and hat in front of a wall covered floor to ceiling with a grid of gold-leaf sheets. Less dramatic but equally masterful is a gentleman’s hat, crowned with a golden laurel wreath, casually hanging from the door of a wooden cabinet. In both works, the application of gold transforms anonymous workaday garments into monuments to a person’s life.

Both Kounellis and Byars’s works are undoubtedly affected by the theatrics of the spaces they inhabit. A Catholic church, with its history and ritual function, cannot help but shape an artwork like Byars’s, in which the artist is ceremonially being laid to rest. It’s heavy-handed in one respect, but effective in another—a fitting send-off to an artist who envisioned himself interred in Venice. Likewise, Kounellis’s retrospective is enhanced by the grandeur of its setting, which is in turn brightened, subverted, and physically transformed through fire and sound. Kounellis’s work often questioned power structures, and there’s something gleeful and dangerous about open flames leaving soot on the walls of a palace that was once home to nobles and popes. This posthumous exhibition, much like Byars’s, is urgent, exquisite, and could only have taken place in Venice.

‘I Knew Something Was Wrong’: Anthony Rapp Testifies at Kevin Spacey Civil Trial

Stop What You’re Doing: The Lisa Frank Crocs Are Back in Stock