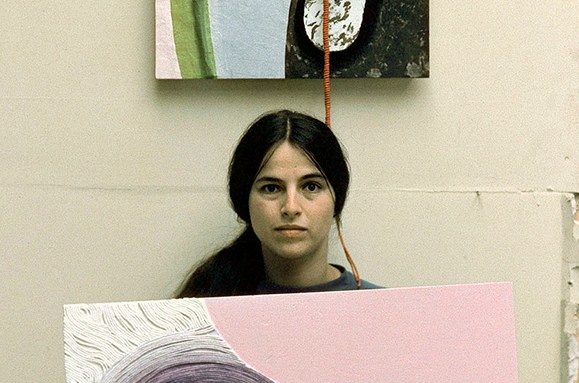 Marcie Begleiter’s 2016 documentary on Eva Hesse is notable for its unexpectedly intimate look into the mind of a young sculptor. The film, which will be available for purchase on iTunes and Amazon on August 15, constructs an emotionally intense portrait of the German-born American artist through interviews and extensive archival research. Based on the recently published journals that Hesse kept throughout her life, the confessional quality of the script—voiced by Selma Blair with zany energy, sometimes dark, sometimes joyful—brings the artist startlingly close. The film’s efficacy of capturing her vibrant spirit is also what makes it so tragic. Hesse died from a brain tumor in 1970 at age thirty-four. Even in her short career, she was one of the first Post-Minimalist sculptors, destabilizing the rational systems and serial elements typical of Minimalism through her visceral use of thick rubbers, wrapped cords, and glistening plastic.

Hesse’s life and art are deeply intertwined, especially given the widespread, though unproven, belief that she was poisoned by her cutting-edge art materials, synthetic plastics, polyester resins, and fiberglass. But the film avoids the maudlin trap of focusing on tragedy. And neither did Hesse: “Everything that happened to her, good or bad, empowered her,” her friend Rosie Goldman recounts in the film. The movie humanizes rather than idolizes Hesse. Countless images of work from her most productive period, between 1964 to 1970, are contextualized with narration taken directly from her diaries. While producing this work, Hesse wavered between anxious uncertainty and thrilling breakthroughs. Because of this frank view of her working practice, Eva Hesse offers useful lessons for the emotional reality of creative life.

At sixteen, Hesse showed up to the New York office of Seventeen magazine, landing an internship just because of “the gall of coming up there,” as she wrote in her diary. She moved boldly against the expectations for a woman in the 1950s. In a letter to her father, teen-age Hesse declared her intentions to become an artist: “Daddy I want to do more than just exist, to live happily contented with a home, children, to do the same chores every day.” She fiercely sought success defined on her own terms. As a painting student at Yale, Hesse committed to a rebellious method: “I will abandon restrictions and curbs imposed on myself, I will paint against every rule!”

“I am almost too anxious for every moment and future moment,” Hesse scribbled in 1960. The film demonstrates how Hesse’s anxiety was a strength as much as a debilitation, mining her notebooks for her trove of complex feeling as she pushed herself further into unknown territory. In a letter to her friend Sol LeWitt, Hesse wrote, “I fluctuate between working at the confusion or non-working at the confusion, and when not actually at work I nevertheless struggle with the ideas.” After coiling scraps of rope into her paintings she wrote, “I sit now after two days of working on a dumb thing, which is three dimensional, and I should go on with it. But I don’t know where I belong, so I give it up again.” These tentative experiments became the foundation for a new kind of art.

Lesson 3: You can leave. And you can come back.

People thought Hesse was crazy to leave New York for Germany in 1964. Along with her then-husband Tom Doyle, Hesse moved to a small town for fifteen months, setting up their shared studio in a former textile factory. While abroad, Hesse was tormented by nightmares of her childhood fleeing Nazi Germany. She was uncertain about the direction of her work, in contrast to Doyle’s bravado. “I might just have to believe in me more before working can mean something to me,” she wrote. But by the end of the year, Hesse had developed a physical approach to art-making that critic Lucy Lippard, interviewed in the film, calls “surrealist.” These new works, which often featured bright colors and rope swirling up and off the picture plane, were a total departure from her abstract paintings and intricate collages of the year before. When she returned to New York after that crucial year of social isolation, Hesse brought her idiosyncratic style to the Minimalist scene, then the zeitgeist, and almost immediately caught the attention of artists, gallerists, and the press.

Play is what unlocked material truth for Hesse. She enjoyed experimenting with raw materials before determining how to use them. One to-do list pictured in the film reads “rent, play with hardware, titles.” The hardware in question was often sourced from what Sylvia Plimack Mangold remembers as the “wonderland of materials” on Canal Street. “The closest I come to that now is Home Depot,” Mangold jokes. Perhaps Hesse was a forbearer of object-oriented ontology; her knowledge of form stemmed from the innate qualities of her flexible materials, teased out through empathic encounters. As Lippard reminisces, she would “sit with her materials like they were a creature.”

Lesson 5: Nothing is off limits.

Key influences for Hesse came from other disciplines. Her first sculpture was a prop for a 1963 Happening at George Segal’s farm: a chain of people danced in a huge fabric tube she made while Yvonne Rainer threw apples off a barn roof. Richard Serra remembers those moments and the well of “ideas coming from dance” that also deeply inspired him. In the 1960s sculpture was pushed into new frontiers as chemists developed synthetic materials. Hesse joined Experiments in Art and Technology in 1967, a group cofounded by Robert Rauschenberg that brought scientists and artists into conversation. Through this group, she learned about new polymers like latex, enabling her to invent techniques such as rubberizing fabric.

Lesson 6: Get dirty and go big.

The documentary does not do much to dispel the story that toxic resin killed Hesse. “Her tumor was far too large to even think that the small amount of exposure she had gave her that brain tumor,” says her plastics technician Doug Jones. Despite several similar statements, the debate ends with Grace Wapner ceding, “we will never know.” But Hesse’s enthusiasm for experimenting with new materials is anything but a cautionary tale. Up until the last moments of her life, her work kept transforming, occupying what Whitney Museum curator Elisabeth Sussman calls “the borderline of uncontrollability.” Her ambition in scale is what enabled her to “stand her ground” and make such major artistic statements. Even as she felt uncertain, Hesse worked on her sculptures until “they felt real for me.” Today, much of the rubber has crumbled and the resin yellowed, but Hesse’s spirit lives.

Eva Hesse will be released on iTunes and Amazon on August 15.