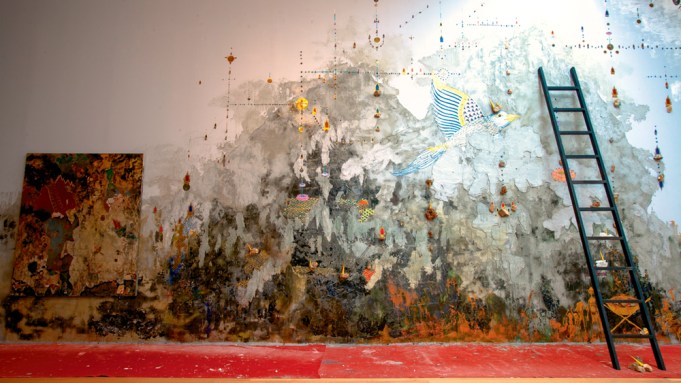 The new “bad boy” of the Thai art world is 27-year-old Korakrit Arunanondchai. He made his international debut at New York’s MoMA PS1, where last March he gave a rap-and-pop-singing performance in conjunction with his solo show, which featured a trademark mix of video, burned fabric (usually denim) and body-painted canvases.1 After a subsequent solo at the Los Angeles space the Mistake Room [see review this issue], Arunanondchai was back in the Thai capital briefly in September to serve on a judges panel for a new emerging artist award conceived by the eclectic, privately funded Museum of Contemporary Art (MOCA), before jetting to London to open yet another solo exhibition, this time at Carlos/Ishikawa Gallery. Arunanondchai recently emerged from the Columbia University tutelage of Rirkrit Tiravanija, swiftly establishing himself as an inheritor of the relational aesthetics that his Thai mentor has personified worldwide ever since he began cooking pad thai and curry in SoHo galleries in the early 1990s.

This season, the Bangkok Art and Culture Centre (BACC), Bangkok’s premier contemporary-art hub, has mounted the 19-artist survey “Thai Charisma: Heritage + Creative Power” (through Nov. 16), which aims to demonstrate how some of Thailand’s most accomplished contemporary artists continue to be inspired by Buddhist scripture and related subject matter [see the feature on participating artist Jakkai Siributr this issue]. The show was curated by Apinan Poshyananda and is an adaptation of his similarly themed exhibition “Thai Transience,” at the Sinapore Art Museum in 2012. Poshyananda introduced Thai contemporary art to New York in two watershed shows at the Asia Society (“Contemporary Art from Southeast Asia: Traditions/Tensions,” 1996, and “Montien Boonma: Temple of the Mind,” 2003). Before pursuing a career as a scholar and curator—he earned a PhD at Cornell University in 1990 and converted his dissertation into the book Modern Art in Thailand: Nineteenth and Twentieth Centuries (1992)—Poshyananda had started out as an installation and performance artist. (One of his more conceptually sophisticated installations was provocatively titled How to Explain Art to a Bangkok Cock, 1985). Poshyananda has since ascended to the position of permanent secretary and acting minister of culture of the Thailand Ministry of Culture,  where he now conceives and stewards programs aimed at enhancing the country’s creative profile internationally (following an agenda derived from popular “creative economy” theories hatched worldwide in various economic and cultural forums over the last decade).

This fall, Poshyananda hosted an illustrious group of international curators, artists, professors and officials, when the Solomon R. Guggenheim Museum’s periodically convened think tank, the Asian Art Council, landed on the BACC’s doorstep, with Guggenheim director Richard Armstrong giving a keynote address titled “Asian Art and a Guggenheim Constellation.” It seemed exceedingly fitting, then, that Poshyananda’s “Thai Charisma” should present ancient Thai Buddhist treasures—including accordion Tribhumi manuscripts (detailing the Theravada Buddhist cosmology) and 17th-century bronze Buddhas in poses of “dispelling fear”—in dialogue with an array of contemporary artworks. Poshyananda succeeded in projecting precisely what the Thai public might well want to believe in this period of crisis (following the nation’s 19th coup d’état last May), even as the Guggenheim circle debated, behind closed doors, the current condition of “The Asian Contemporary” (ironically, with a critical focus on China).

Only days after the Aug. 29 opening of “Thai Charisma,” its most renowned contemporary participant, 74-year-old Thawan Duchanee, passed away unexpectedly. A truly galvanizing and influential figure—he was named a National Artist by the Thai government over a decade ago—Duchanee graduated from the capital’s leading art academy, Silpakorn University, in the early 1960s. He then thoroughly immersed himself in Western modernism in Amsterdam, where he studied at the Royal Academy of Visual Arts from 1964 to 1968. Upon returning to Thailand, Duchanee abandoned this foreign indoctrination to become Thailand’s supreme Buddhist artist, producing countless drawings, prints and paintings replete with expressionistic images and calligraphic flourishes—works that have since come to epitomize an entire school of Thai Surrealism.

In these circumstances, certain cultural events this fall carried slightly ominous overtones. Young indie filmmaker Lee Chatametikool’s Concrete Clouds (2013), a much-lauded romantic drama, received its first “red carpet” screening in Bangkok in mid-September. Chatametikool, formerly a film and sound editor, is a protégé of director Apichatpong Weerasethakul (Uncle Boonmee Who Can Recall His Past Lives, 2010). Concrete Clouds explores the lives of two Thai brothers recovering from their father’s suicide in the grim context of the Asian financial crisis of 1997.

Even more pointedly, Bangkok’s 100 Tonson Gallery is currently presenting [through Jan. 4, 2015] a solo exhibition of paintings based on photographs addressing the political protests leading up to the recent coup. The works are by Phaptawan Suwannakudt, who trained in the 1970s in her father’s legendary Bangkok studio of Thai classical mural painting. While virtually everyone looked forward to the opening in October, Suwannakudt’s title, “Days of (Endless) Meaninglessness,” seemed to speak longingly for a less troubled future.

Bulgari Is Opening a Private Island Resort in the Maldives

Secret Service Has Been Chattering for a Year About Trump’s Jan. 6 Capitol Tantrum: Report