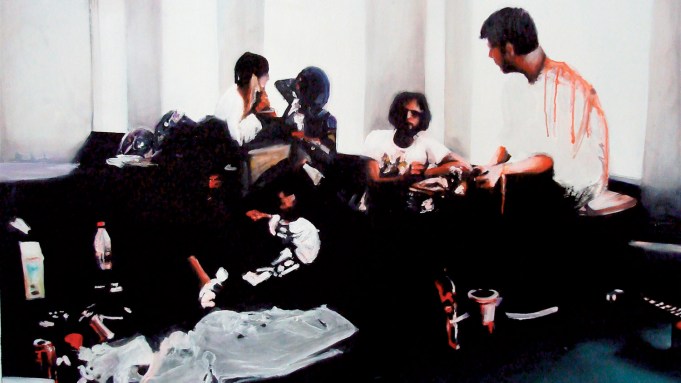 Living amid the hype that has enveloped Berlin like a golden cloud for the last decade-or the last two decades, some would argue-I’m somewhat wary about becoming a cog in the city’s PR machinery, even though I undoubtedly have done my bit in the past. I am, after all, a writer, one who has bills to pay, and the city is no longer as cheap as the “poor but sexy” slogan famously put forth by recently reelected mayor Klaus Wowereit would have it. Many would-be émigrés, drawn by the idea of dwelling in style among the last vestiges of Western European bohemia, soon find that life here is not much like the fashion magazine spreads set in the city, and promptly retreat to their safeholds in New York or wherever.

But if you’re able to withstand the Siberian winters-and the far more chilling realization that Berlin is a capital of art production rather than career-accelerating critical or commercial support-you’ll find that this is still a terrific place for artists to live. Terrific, that is, for those who want to carve their niche while ignoring market trends; those who, immune to the demands of the culture industry, make art out of internal necessity rather than as a means to an end; and those who simply wish to ignore the rules of the game-or make their own.

Consider the case of painter Pietro Spirito. Right now, Berlusconi’s Italy is experiencing a massive exodus of artistic and intellectual talent-virtually anyone young, with any ambition, simply leaves as soon as they can. But unlike many Italians living in Berlin, Spirito relocated here by a lucky fluke rather than calculated design. “I was working as the manager in a salon in Milan,” he explains. “The owner was moving to Miami and wanted to leave the salon to me. It was the first time in my life that I was earning money at anything, and he offered me a really nice monthly salary with a share of the profits. But I couldn’t do it. I told him, ‘Sorry, but I want to leave Italy too.'”

After a short stint in London, Spirito found himself back in Italy, this time in Florence, working in a gay club. At that point, he says, “I was really just waiting to see what would happen next. I had no plan.” One night, there was a commotion at the door. A thin, drunken young American was screaming at the bouncers, demanding to be admitted. “It was a leather party, so of course they didn’t want to let him in, because he didn’t fit the dress code,” Spirito says. “He was wearing skinny jeans, a ripped T-shirt and Converse sneakers.” He was told that he could come back later for the naked party. “What?! You want to see me naked? Fine!” He started to disrobe.

“Nobody could believe it,” Spirito recalls. “He was suddenly just standing there naked in front of the bouncers at the entrance to the club. Nobody in Florence ever acts that way! I was completely fascinated. I knew they weren’t going to let him in, so I told him to come back the following night, when I was running the party.”

Little did Spirito know that this chance encounter would change his life. The loud, irate American turned out to be Brian Tennessee Claflin, a young ex-Mormon who had recently begun to do confrontational performances in various small galleries in his newly adopted city of Berlin. Over drinks the following night, Claflin encouraged Spirito to relocate to the German capital, where rents were low enough for him to do what he had really wanted to do since graduating from art school several years earlier-just paint. Two weeks later, he was a Berliner. Currently living in a studio on the industrial outskirts of the city, Spirito has recently shifted from a photorealistic style toward distorted, darkly impressionistic depictions of his coterie in Berlin. Yet as grounded as this work seems to be in the city’s decadent nightscapes, Spirito’s new portrait series of individuals with missing limbs also implies a complex estrangement from his environment.

Claflin is best known in Berlin as a colorful and often disruptive presence in the blurry zone where the city’s nightlife intersects with its art scene. He pursues all his activities with the same anarchistic spirit, making PORK, his weekly party-cum-Be-In, something of an extension of his artistic practice. Housed in the gay sex club Ficken 3000, PORK, which has been described as a “riot dance party,” features guest DJs and performers each Sunday. PORK’s brand of sensational fun stems largely from the random mix of guests the event attracts, which can include art world nabobs, topless dancers, drugged-out club kids, assorted drunks, closeted members of the nearby Muslim immigrant community and “gay list” celebrities such as singer-songwriters Michael Stipe and Rufus Wainwright, filmmaker Bruce LaBruce, and Jake Shears, front man of the band Scissor Sisters. At the center of it all is Claflin, whose image-which can’t be separated from his work-recalls John Waters’s celebratory esthetics of marginality. In Barter, a recent performance at the Hebbel-am-Ufer Theater, Claflin appeared covered in Native American war paint and burned $1,000 of currency, which he allegedly earned from hustling, while his recorded voice read out the U.S. Federal Reserve Act.

Spirito and Claflin are but two of a loose coalition of young artists that also includes Sophie Iremonger, Iwajla Klinke, Christa Joo Hyun D’Angelo and Stevie Hanley. Like Claflin, Hanley is haunted by his Mormon heritage: his large-scale drawings refract, in somewhat cartoonish fashion, the spiritual aspirations of 19th-century American landscape painters.

Religion is also obliquely addressed by Klinke, half-Bulgarian and half-German, who grew up in the former GDR and moved to Berlin a decade ago. Klinke came to art relatively late, having pursued Islamic and Jewish studies at Berlin’s Frei Universität, then worked as a journalist and documentary filmmaker, before devoting herself to photography. Mining classical portraiture, Klinke photographs sitters one by one in her Kreuzberg apartment, utilizing a dark background and natural light. Her subjects-mainly children and sultry young men-are adorned with headpieces, lace bands and strips of fancy cloth resembling the sacred garb of obscure faiths. Thanks to the Internet, Klinke already had a cult following in Berlin before she began exhibiting her images earlier this year. Working in a mode that combines austerity with sexiness, she ranks among the more intriguing photographers of the younger generation.

One of the more talked about exhibitions in Berlin’s “off” scene in the past year was Christa Joo Hyun D’Angelo’s “Spectacular Society” at Galerie Suvi Lehtinen. D’Angelo-a native of South Korea, adopted by a New York family of Italian descent-studied Polish poster art in Krakow, where she earned a BFA from the Jan Matejko Academy of Fine Arts, prior to her 2006 move to Berlin. Here she produces work as colorful and scrambled as her background. “Spectacular” riffed on Guy Debord’s anti-media creed by displaying art books and magazines whose pages have been cut up and mutilated. Flipping through the altered publications, one perceives the subversive power of collage to expose popular culture’s program of seduction via images.

Sure, there are also plenty of big-name artists living in Berlin. It’s not unusual to brush elbows with the likes of Olafur Eliasson, Christian Jankowski, Keren Cytter, Cyprien Gaillard, Phil Collins, Wolfgang Tillmans or Douglas Gordon-but I wouldn’t be doing you much of a favor by rehashing their achievements. Ironically, it’s the environment created by Berlin’s future art stars that draws such current luminaries to the ever-buzzing city on the Spree. Working intensely in varying states of isolation, the colorful anti-heroes of Berlin’s unofficial art scene ensure that the city remains “the place to be,” but only for a very specific type: artists who don’t truly belong anywhere, and who know it and relish it.

TRAVIS JEPPESEN is a writer and critic who lives in Berlin.