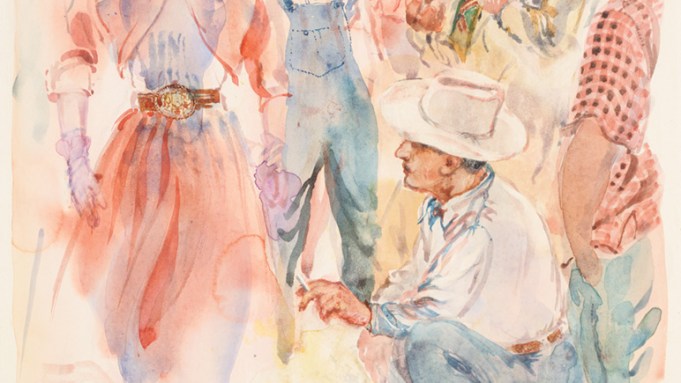 The latest addition to the Dallas skyline is the Margaret Hunt Hill Bridge, a soaring structure that spans the Trinity River. Designed by Spanish architect Santiago Calatrava and named after the daughter of famed oil billionaire H.L. Hunt, the bridge is part of the Trinity River Project, an ambitious plan to connect neighborhoods that had long been separated by the city’s primary waterway. As with almost everything in the “Big D,” there’s an element of overkill to the project. What could have been a simple public highway paid for with state and local funds was upgraded to an iconic monument through generous private donations. In all, Calatrava has been commissioned to design three bridges here, the second of which is nearing completion as I write.

The Calatrava building spree reveals a lot about the priorities of the business elite in Dallas. For the past few decades, civic leaders have been attempting to transform the landlocked prairie city into a world-class art destination by endowing cultural institutions with big budgets and importing big-name artists and architects. These efforts, which include the creation of a centralized Arts District downtown, are laudable in many respects. And who’s to complain if altruistic initiatives to serve the public good also happen to generate profits for well-positioned real-estate developers? Trouble is, the grand vision of the elite often overlooks the needs of the city’s increasingly diverse citizenry.

The Margaret Hunt Hill Bridge, for example, is meant to symbolize the “opening” of West Dallas. Previously isolated, that area has historically been home to Latino and African-American communities, whose members were forced to reside in a part of the city underserved by transportation infrastructure due to Dallas’s long-standing segregationist policies. Now that the downtown financial district is only minutes away—a quick drive across a resplendent trophy bridge—real estate speculators have begun to take notice of West Dallas, and the process of gentrification has already been set in motion. In recent months, the area has seen the dislocation of the working poor, the closure of some of the neighborhood’s oldest restaurants, the arrival of a few artists, the opening of a handful of higher-end eateries and the establishment of one or two contemporary art galleries.

The city boosters have always tried to present an image of their town as a place apart from the rest of Texas and unique in the world. This cherished singularity of identity is very much at the heart of the Dallas Myth, which equates progress with the grit and determination of civic leaders, most of whom have been drawn from the upper echelons of the business community. And that community, in turn, has been dependent, during its ascendancy, on commodities—cattle, cotton and oil—and retail trade. In the past, Texans tried to convince anyone who would listen that the state had the resources to go it alone. It’s true that Texas overall and Dallas in particular are rich. Yet, as oil continues to hover at a low $40 a barrel, this imperious attitude of self-reliance is looking increasingly arrogant and unrealistic.

Dallas is also a city divided by class and race. The “Dallas Way”—another term well-heeled residents often use to describe a sense of exceptionalism—is, as many historians of the city have pointed out, mostly shorthand for the “North Dallas Way.” It represents, in other words, the cultural perspective of the wealthy white business leaders who reside in the lush environs of the so-called Park Cities. The Dallas government’s attempts at urban planning over the decades have resulted in an urban area partitioned by freeways. Yet even as these car-centric schemes cemented the city’s internal social divides, they have been integral to establishing Dallas as a major hub within state and national transportation networks.

In fact, the relationship between business and art in Dallas is long-standing, having matured at a tremendous rate over the past half-century or so. Of all the business leaders who have made their mark on Dallas’s cultural scene, it is probably the oilmen and the retailers who head the list, mostly through their involvement with the Arts District development.

The Dallas Arts District was conceived in the late 1970s and refined by a succession of urban-planning consultants. In 1984, the Dallas Museum of Art (DMA)—designed by Edward Larrabee Barnes—was the first major institution to find a home downtown. The Morton H. Meyerson Symphony Center—designed by I. M. Pei—followed, in 1989. By 2009, the Arts District also included the Crow Collection of Asian Art, the Nasher Sculpture Center (by Renzo Piano) and the AT&T Performing Arts Center. The last comprises an opera house designed by Norman Foster and a theater by Joshua Prince-Ramus and Rem Koolhaas. Many of the commissioned architects—Pei, Piano, Foster and Koolhaas—are Pritzker Prize laureates. The administration of the Arts District is overseen by a board dominated by city boosters affiliated with banking, real estate and other corporate interests.

These board members are heirs to a tradition of arts patronage that began with Dallas’s great retail magnates. Leon Harris Jr., Stanley Marcus and Raymond D. Nasher each had a profound effect on Dallas’s cultural institutions. Harris, of A. Harris & Company department stores, is famous for promoting Southwest fashion in France during the 1950s and commissioning the émigré German artist George Grosz in 1952 to produce a series of paintings to celebrate the store’s 65th anniversary. Marcus was the chief executive of the luxury retailer Neiman Marcus, founded by his father and his aunt in 1907. Nicknamed the “Merchant Prince” by D Magazine, Marcus served as chairman of the board of directors of the DMA and founded the Dallas Opera. Nasher’s NorthPark Center—built in 1965 on a 97-acre cotton field—was the largest enclosed shopping center in the world for many years. On view at the mall have been works by such artists as Mark di Suvero, Frank Stella and Anthony Caro, all drawn from Nasher’s exceptional private collection. Indeed, the displays at the mall anticipated the offerings of the nonprofit Nasher Sculpture Center, which opened in 2003.

The art-business relationship, however, has not been without its controversies. In the mid-20th century, the challenge for patrons like Harris and Marcus was to demonstrate that contemporary art of the time—including work by members of the New York School—was not politically rebellious but, in fact, perfectly compatible with the Dallas Way. This was not always a simple task in a period when Texas congressperson and notorious red-baiter Martin Dies Jr. was denouncing such works as “subversive” and “Communistic.” Marcus, for his part, championed a program by which the DMA would display contemporary art from the collections of non-Dallas businessmen with impeccable political credentials. This helped calm any shaky nerves as the museum initiated a program to purchase works by artists including Jackson Pollock and Alexander Calder—pieces that are now the jewels of the museum’s collection.

In this context, Harris’s 1952 decision to commission Grosz—a former member of the German Communist Party—to produce a suite of paintings depicting Dallas as a rising metropolis is breathtaking in its perversity and audacity (or, perhaps, naïveté). Grosz’s ambivalence toward the commission—which would have been worth well over $100,000 in today’s dollars—is documented in the catalogue that accompanied a superb 2013 exhibition at the DMA of the original works and their contextual materials. Grosz produced oils and waterclors depicting the Dallas skyline and other views of life in this fast-growing city: the bustling crowds and illuminated entertainment and shopping districts and, in rather dull portrayals, emblems of the oil, cotton and cattle wealth of North Texas. Far more interesting were Grosz’s impressions of Deep Ellum—an area of Dallas settled after the Civil War as a “freedmen’s town,” and probably not a neighborhood much visited by Harris’s peers in the Chamber of Commerce.

The business elite who have spearheaded social and cultural improvements in the city tend to be regarded as comprising a benign oligarchy.[pq]For artists who have made Dallas their home, especially younger artists drawn to this city by high expectations and the promise of low rents, the benefits of the city’s rapid development will not appear so crystalline.[/pq]Historically, their decisions have sometimes required public funds or at least the stamp of broader public approval. Whether through referendums or bond initiatives, generations of ordinary citizens have voted to dig deep into their own pockets and contribute to grand visions. Schemes that would have an enormous impact on business, such as the rail service linking Dallas with the Midwest and the West in the 19th century or the hosting of the 1936 Texas Centennial Exposition at Fair Park, were enthusiastically embraced by the public at large, even if the ultimate effect of these projects on the general well-being of the citizenry remains open to question.

Cultural development has proceeded along similar lines. In Dallas, there is currently a lively debate taking place over the relationship between local artists, local galleries and the high-profile Arts District. The city government seems unable to make good on its early promise to turn the district into a real home for artists, and instead appears content to allow developers to ring this urban showcase for the work of starchitects with impossibly expensive luxury high-rise condominiums. Some artists are concerned that Dallas has invested heavily in marquee work by outsiders and is only belatedly coming to grips with the issue of how to support any sort of creative economy on the ground. I believe that the large and internationally renowned cultural institutions of Dallas present a convincing argument that Dallas really does know how to connect with the rest of the world. Yet, for artists who have made Dallas their home, especially younger artists drawn to this city by high expectations and the promise of low rents, the benefits of the city’s rapid development will not appear so crystalline.

There is already anecdotal evidence, reported in Glasstire, the region’s widely read online art magazine, that the increase in population owing to the growth of employment opportunities in and around the city has resulted in an increased pressure to gentrify formerly low-rent neighborhoods like Oak Cliff or The Cedars. Gentrification leads to higher rents and property values in such areas, which have traditionally been occupied by artists, the lower middle-class and the working poor. These neighborhoods wouldn’t ordinarily be so desirable were it not for the distinctive character imparted by the people—and not simply the artists and artisans—who call it home. Critics writing in Glasstire frequently bemoan the fact that artists are being priced out of Dallas and other cities, but it’s not a problem for artists alone.

When speaking of the growth of cities, it is always crucial to make a distinction between the culture of an urban center and its elite art institutions. A city’s institutions will always have an impact on the community of artists, whether or not this relationship is articulated explicitly or instrumentalized in the form of programs (like reduced admission fees and sophisticated educational initiatives) that widen professional access to the museum, symphony hall or theater. Yet only the most reductive of imaginations could conceive of the symbolic representation of “the arts” in a giant downtown edifice as the arts themselves. The latter develops elsewhere, in affordable studio spaces, small nonprofit spaces and art schools. Though less spectacular, these institutions require nurturing as well. Still, the very existence of highly visible cultural institutions reflects back on the entire milieu of art in Dallas, and if we can see beyond the glittering facade, we may catch a glimpse of a vital local art world that is reinventing the meaning of the Dallas Way.

Rowing Blazers and K-Swiss Team Up on a Sporty, ’90s-Inspired Collection of Clothes and Kicks