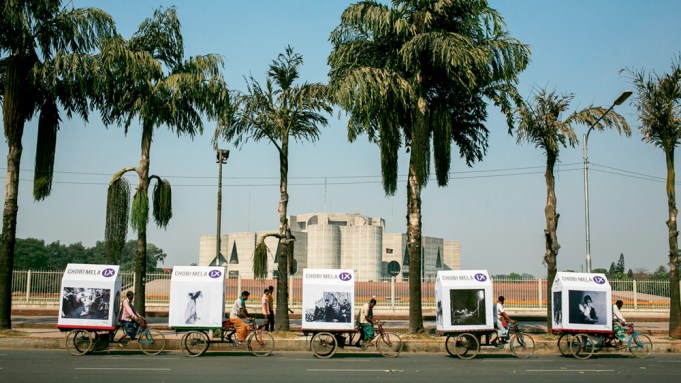 Bangladesh’s growing community of photographers comprises one of the most vibrant parts of the country’s art scene. Many leading Bangladeshi photographers working today, including Shumon Ahmed, Munem Wasif, and Samsul Alam Helal—all of whom have exhibited their work at major biennials and triennials in Asia and are gaining increasing exposure in Europe—have studied or taught at an innovative school: the Pathshala South Asian Media Institute in Dhaka. Pathshala was founded in 1998 by photographer, curator, writer, and activist Shahidul Alam. The pedagogical institute is only one of the initiatives that Alam has spearheaded in a career-long effort to promote photography in Bangladesh. In 1989 he established the Drik Picture Library, a photo agency with an archive dating to the country’s founding in 1971; in 2000, he launched the first edition of Chobi Mela, one of the first international photography festivals in Asia.

Photography was once shunned by the leaders of Bangladesh’s most prestigious art institutions. Photographers were not included in the first editions of the Asian Art Biennale in Dhaka, for instance, which put the young nation’s art scene on the global map in the 1981. Tellingly, the country’s steep import tax on international art has not applied to photography, apparently because the bureaucrats in charge of revenue collection do not regard photographs as artworks.

Alam told me recently that the “great divide” that kept photography out of the art world of Bangladesh was partly generational, with many of the established “gatekeepers” shying away from contemporary developments in film, photography, and video, as well as conceptual art in general. “The art scene in Bangladesh has been dominated by traditional pictorialists,” he explained, but “younger artists are beginning to challenge that premise,” adopting sophisticated and often politicized approaches to new media.1

Prior to the establishment of Pathshala, the Bangladesh Photographic Society (BPS), founded in 1976, was the primary meeting place for those interested in the medium. “It was an important organization, where the country’s top photographers and photographic novices could mix,” Alam recalled. “It was like other camera clubs worldwide, and concentrated on form rather than content. It was about the single image and about image construction.” During Alam’s tenure as president of BPS, the institution expanded its facilities, adding a new dark room and acquiring offset printing equipment.

Alam conceived of Drik as an alternative institution that could encourage photographers interested in using their skills to advance social justice. “Working in a repressive environment requires one to be strategic,” he told me. “Our interventions have been well planned and based upon rigorous research.” “Positive Lives,” a 1997 exhibition Alam curated at Drik, was one of the first opportunities for the public in Dhaka to engage with images of gay people in Bangladesh and attend seminars about sexuality. “There are invisible lines we cannot cross,” Alam reflected, “and the trick is to work out where these constantly shifting lines are.” If Drik helped foster journalistic rigor, Alam said, “Pathshala is where fine art and conceptual photography began to blossom.”

Today, the institute has seventy students enrolled in a three-year professional program, and 580 students participating in a one-semester foundation course. The school is supported entirely by tuition fees, roughly $480 per semester for full-time students. Pathshala currently has international students from the US, Europe, and Asia. A new building for the school, designed by Bangladeshi architect Bashirul Haq to evoke the form of a filmstrip, is expected to open in 2019.

In its early days the institution relied on foreign philanthropist organizations and international faculty to operate. But nearly the entire faculty and advisory council now consist of ex-students, meaning that Pathshala has become a self-sustaining Bangladeshi institution. Kunsthalle Zürich director Daniel Baumann, who has been engaged with the Bangladesh art scene since 2015, recently observed to me that “former students who turned into teachers exposed their expanded visions and ambitions to their students who . . . further explored the media’s political and artistic possibilities.”2

The curriculum includes opportunities to study curatorial practice, encouraging young artists to push the boundaries of the exhibition format. One of the most interesting shows I’ve seen at Pathshala was “1134—Lives Not Numbers” (2014), curated by Munem Wasif and Mahbubur Rahman based on an idea by faculty member Taslima Akhter. The show commemorated the anniversary of the Rana Plaza tragedy, when a Dhaka building used for garment manufacture collapsed, killing some 1,134 people. The show’s organizers converted the school’s classrooms, darkroom, and studio spaces into a temporary gallery, and hosted performances on the roof and in the parking area. An exhibition website was launched on April 24, 2014—exactly one year after the collapse—and featured information compiled by anthropologists about Rana Plaza workers.

The show included documentary photographs of the scene and poetic installations of garments and other personal items collected from the site. While “1134—Lives Not Numbers” would have benefited from a less literal approach—some of the galleries were strewn with rubble—it nonetheless marks a watershed in the history of exhibitions in Bangladesh, as it demonstrated that experimental curatorial techniques could be employed to address highly sensitive subject matter. As Wasif explained to me, “it is because of a lack of gallery space in Dhaka that we have opened up the school space to young artists and collectives to curate their own shows.” Yet he also expressed doubt about the viability of curatorial professions in the country, noting that “there are not many institutions, galleries, or museums that have a curatorial position, so even if you are interested in the field it’s very hard to make a living through it in Bangladesh.”3

Chobi Mela, which translates as “picture fair,” has gained a reputation for expanding on the curatorially adventurous experiments at Pathshala. Clara Kim, curator of international art at Tate Modern in London, told me that “it should be a stop for anyone internationally who is interested and invested in image-making.” The exhibition transforms Dhaka into an exhibition space. Pedicabs adorned with photographs printed on vinyl sheets moved through the city during the last biennial’s run. Exhibitions take place in abandoned or underused buildings, as well as traditional venues such as the Bangladesh Shilpakala Academy. “Transition” was the theme of the biennial’s ninth edition, which took place in 2017 and featured twenty-seven artists from sixteen countries. Doryun Chun, chief curator and deputy director of M+ in Hong Kong, described it as “an intelligent conversation between the local and the outside,” exemplifying “what I believe should be accomplished by an exhibition in previously off-the-beaten-track locations.”4 The theme for “Chobi Mela X,” slated for 2019, is “Place,” and invitations to submit proposals have gone out to artists and curators, both Bangladeshi and foreign.

While women have played key roles in Bangladeshi politics for decades, gender inequality is evident elsewhere in society. There are very few female photographers working professionally in Bangladesh. This may be due in part to cultural norms in South Asia, where women are not always encouraged to do the kind of travel and independent work necessary for photojournalism (the primary way to earn income as a photographer in Bangladesh). There are scholarships for female students to study at Pathshala, but the school receives few applications, and it will be interesting to see in coming years how the activist approach its faculty professes can combat this gender imbalance to make the institution less male-centric in the long term.

Initiatives started by former students of Alam have broadened the discourse about photography in Bangladesh. Counter Foto, for example, was founded in 2012 by Andrew Biraj and Saiful Huq Omi. The latter was a member of BPS, as well as a collaborator of Alam’s at Drik and Pathshala. Counter Foto is a pedagogical institute that grew out of an eponymous magazine that Omi established in 2004, the first publication devoted to photography in Bangladesh. Counter Foto currently has two campuses in Dhaka and was recently accredited to offer a master’s degree in photography—the first program in the country to achieve this distinction—under the auspices of the National University of Bangladesh. (Pathshala has since been similarly accredited.) While focused on photography, Counter Foto frequently hosts socially minded discussions among dramatists, filmmakers, economists, anthropologists, city planners, painters, engineers, and academic researchers from other disciplines.

New Counter Foto campuses in Kolkata and Bangkok are slated to open in 2019, realizing the organizer’s aim to build a “Photography Institute of the Tri Continent,” a place where artists and scholars from different areas of South and Southeast Asia can explore photography in relation to shared histories of colonialism and resistance. Biraj and Omi are set to launch a new photography festival in Bangladesh called BAHAAS: A Festival of Photography, Art and Discourse, which is titled after the Bengali word for “debate.” Ultimately, the leaders of Counter Foto, like many of the individuals working to change photographic culture in Bangladesh, are seeking to build a new cultural community for the country. “It was because we felt the existing institutions had failed us that we had to come up with completely new models,” Alam told me. “We built from the ground up.”

No More Countachs: Lamborghini Is Giving Up Retro-Inspired Models to Pursue Its EV Future