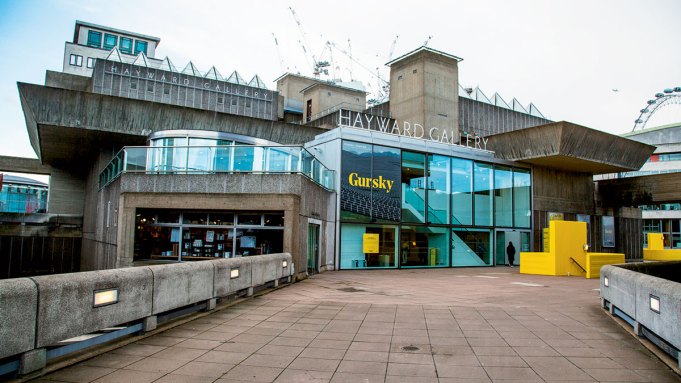 The reopening of the Hayward Gallery in January, after a two-and-a-half-year renovation and in time for its upcoming fiftieth anniversary, has been met with such widespread praise and enthusiasm that it’s actually a little bit disconcerting. Because if there has been one constant feature of the UK’s cultural landscape over the past half-century, it’s that the Hayward, and the entire sprawling Southbank Centre arts complex of which it’s a part, sharply divides opinion—indeed, has served as a sort of index of opinion, a public symbol attracting radically opposing views about architecture and modernism. For its supporters, the Hayward is a stunningly designed building, albeit until recently showing its age. They see it as an example of the Brutalist ethos at its most playful and provocative, featuring concrete forms that appear dynamic yet oddly discreet, squirreled away in and then unexpectedly emerging from the Centre’s external levels and walkways. For its detractors it’s quite simply an eyesore—an affront to good taste and decency, the quintessence of modern architecture at its worst. “Concrete monstrosity” is the catchphrase that has been applied to the Hayward and other Brutalist buildings around the UK, trotted out in countless articles in the conservative press over the years.

The response to the reopening, however, has been mostly positive across the board, certainly without any of the vitriol one might have expected. True, much of the enthusiasm is due to the art on the walls, an excellent retrospective of the German photographer Andreas Gursky, running through April 22. But press mentions of the venue itself, and the improvements carried out by architects FCBStudios, have also been glowing—as glowing as the upstairs galleries, newly opened up to daylight from the Hayward’s pyramidal skylights, or as the richly polished brass handrails that adorn the long central ramp and stairwells. Not that I’m suggesting the haters have all suddenly changed their minds. But they have largely gone quiet; there seems to be a general sense that the present moment rightfully belongs to the Hayward, and that attacks would be inappropriate. The current discourse is all about designating the building—and this seems to be the new buzzword—an “architectural gem,” and so lauding its rugged geometry, the airiness of its spaces, the way its concrete interior suggests continuity with the Southbank outside, and so on.

Interestingly, most of these elements have always been present, part of the original design devised by the team of architects working for the London County Council in the late ’60s. In fact, of all the recent renovations, the only one that really affects the internal space in any significant way is the exposure of those skylights in the upstairs galleries, revealed by removing a false ceiling that was installed back when the original skylights proved faulty. The rest of the alterations are either cosmetic—polishing the brass, deep-cleaning the concrete, re-laying the terrazzo floors—or completely unnoticeable, such as updating the electrical system. Sure, the gallery looks fresher, crisper, more spruced up, and this is great to see, given the neglect it previously suffered. But essentially—structurally, architecturally—things are the same as they ever were.

As a longtime fan of the Hayward, I personally wouldn’t want it any other way. The Hayward is utterly distinct from any of London’s other major spaces, a unique venue for exhibiting contemporary art, although in some ways also a difficult one. For all the grandeur of the views from its open stairwells, for all its air of rugged enclosure, it can also feel a bit mazy and hard to navigate. Faced with various routes through the space, or multiple levels breaking up the displays, one sometimes finds the proper sequence of an exhibition a little obscure. But that’s simply part of the building’s charm. As Hayward director Ralph Rugoff, who has recently been named curator of the 2019 Venice Biennale, said at the press conference for the gallery’s reopening, “The Hayward isn’t trying to be a neutral, white cube space. You’re always going to have an experience of architecture.”

This experience of architecture, in its broadest sense, is what lies behind the shift to a more enlightened attitude toward the gallery. The public has embraced not only the revamped physical features themselves but also the style as a whole. Put simply: Brutalism is hot right now. In fact, it’s been heating up for the past half-decade, bubbling away among aficionados as part of a revival of interest in all types of mid-century modern design and decor. But the period of the Hayward’s closure coincided with rapid growth of the trend, which has now reached a tipping point. For young people, especially, Brutalism has shed its negative image and become widely popular, even rather fetishized. Buildings that not so long ago were reviled now appear on T-shirts and coffee mugs, not to mention in hundreds of Instagram feeds. Meanwhile, the number of books on Brutalism constitutes a veritable mini-publishing boom, from scholarly works through guide books to photographic surveys. (In the last year alone there were three photographic titles: Simon Phipps’s Finding Brutalism and Simon Henley’s Redefining Brutalism, focusing on London and the UK, and the multiauthor SOS Brutalism, which documents lesser-known structures around the world.)

Just about the only people not to have caught up with the zeitgeist are urban planners and local councils. Too often, major Brutalist landmarks are torn down in the name of urban renewal, a process that has been going on for years and shows little sign of abating. It’s true, to acknowledge one of the most commonly aired criticisms, that concrete structures from the ’60s or ’70s can look dilapidated. But then, any physical environment starts to decay if not properly maintained. The Barbican Estate, in the heart of London, is an example of a structure that’s been lovingly looked after and statutorily protected as a site of architectural interest. Over the past decade it has accordingly become a hugely desirable, and hugely expensive, residence for financial district workers. The opposite fate can be seen in something like Robin Hood Gardens, a housing estate in East London that, despite campaigning by architects and heritage bodies, began to be demolished late last year. Fortunately, the Victoria and Albert Museum saw fit to preserve a three-story section of one building for its collection.

The fact that both these examples were residential estates says something important about the particular character of Brutalism in Britain. The distinctive Met Breuer is often labeled Brutalist in the US; but Marcel Breuer himself never called it that, and its sumptuous, granite-clad exterior guarantees it wouldn’t be considered such in Britain. In fact, Brutalism first and foremost signifies the use of exposed concrete, not simply massive or monolithic scale. Indeed, although “Brutalism” as a term—or “New Brutalism,” as it was originally styled—initially implied a rather more genteel vision of modernist architecture, the “Brut” of Brutalism as it’s meant today soon came specifically to denote béton brut, raw concrete, as used by Le Corbusier in his 1952 Marseille housing block, La Cité Radieuse, considered the foundational edifice of the movement. By extension, the term also refers to art brut, with its connotations of primitiveness, directness, authenticity. The style, then, was one of strength, simplicity, robustness, tending toward the gigantic but primarily marked by the use of basic, elemental forms to create a new kind of vernacular.

In Britain, especially, these qualities came to be indelibly associated with the postwar welfare state. During the late ’60s and ’70s, Brutalism reigned as the standard style for municipal projects throughout the UK, not least because concrete lent itself to quick, low-cost construction. For skeptics, the new architectural complexes became a byword for all sorts of social problems; not for nothing is Brutalism the setting of choice for dystopian films, most famously A Clockwork Orange. Yet while some of the results were undeniably dreary or oppressive, at their best they were nothing less than concrete temples to the idea of a more egalitarian, inclusive society: magnificent housing estates, hospitals, schools, university halls, and, yes, arts complexes.

That’s not the only story of Brutalism in Britain—there was plenty of private enterprise involved too. But it’s very much the version that’s emphasized by the current wave of enthusiasm. To proclaim a liking for the Brutalism of yesteryear is a coded way of expressing a desire for a more state-orientated society, one that espouses progressive ideals and public welfare. Proponents of béton brut implicitly reject the market-driven ideology that has dominated recent decades, fostering an architecture of glass curtain walls and brightly colored cladding. Such resistance, even a few years ago, might have been dismissed as a form of nostalgia. But over the past six months or so, the grounds of debate have shifted, and people of all political stripes now openly express fears about the market’s incursion into the public sphere. Witness the overwhelming support for renationalizing the railway network, for example, or concerns about the underfunding of public services.

In terms of architecture, two events bookend this recent period. One was last summer’s tragic fire in Grenfell Tower, a Brutalist housing block in West London that had been renovated in part by covering up the concrete exterior with cheap, fire-hazardous cladding. The other event, occurring only the week before the Hayward’s reopening, was the sudden collapse of the construction company Carillion, the second-largest private contractor to the government, whose projects, including the building of major new hospitals and schools, have had to be abandoned.

In this context, the Hayward seems to stand for a different way of doing things. It represents another way of building, certainly, but also another way of organizing society, one that’s for the equal benefit of everyone. In a sloganeering speech at the reopening press conference, Jude Kelly, artistic director of the Southbank Centre, made these egalitarian principles clear: “Art has to matter to everybody,” she said, and went on to advocate “the greatest art for the greatest number of people.” It was rhetoric, sure. But it was effective precisely for the way it evoked the idea of a socially transformative mission. In that sense, the Hayward feels not just renovated, but wholly revitalized. In its fiftieth year, it suddenly seems utterly contemporary again.