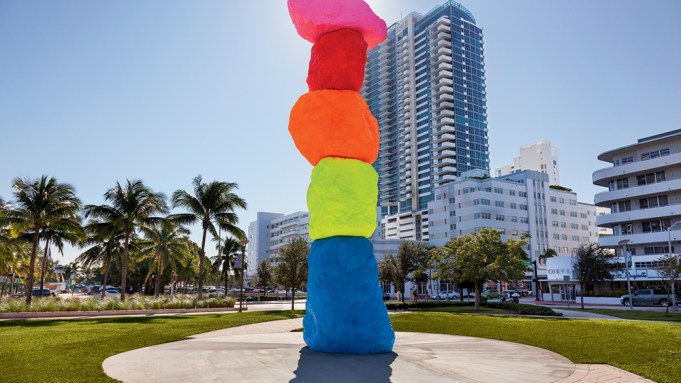 LAST YEAR, Miami saw the unveiling of several extravagant new structures—including OMA’s Faena Forum cultural center and a pair of condo towers designed by Bjarke Ingels—each one trying to outdo the last and none quite standing out. Collectively, they provide a physical index of the forces structuring our urban space. Ugo Rondinone’s Miami Mountain, a sculpture commissioned by the Bass Museum of Art and debuted during Art Basel Miami Beach, could serve as an iconic final punctuation mark to this series. An impressive forty-two-foot column of five painted boulders permanently installed in the park in front of the museum, a block from the ocean, Rondinone’s piece couldn’t be more ingratiating, photogenic, and accessible. Townsfolk and visitors to the December art fairs fell in love with it instantly. Social media feeds were ablaze with snapshots of it. And yet, standing before it, one can’t help but feel baffled. The sentiment is not necessarily triggered by the sculpture itself, since its fluorescent hues and comforting presence emit nothing but feel-good vibes. Rather, the feeling comes from an all-too-frequent tendency in contemporary art to flee the rumblings of a world that is coming apart at the seams. The moment seems to call for modes of engagement with audience and place that differ from the spectacular ones that are commonly found in public art venues. Away from the glitz, one can find quieter proposals, deliberately endeavoring to complicate the texture of experience.

In an exhibition of work by Beverly Buchanan (1940–2015) at the Brooklyn Museum, on view through March 5, curators Jennifer Burris and Park McArthur have endeavored to give the artist’s public projects their proper place. This effort has put a spotlight on Blue Station Stones, a sculpture that Buchanan produced in Miami in 1986. Sitting in a slightly sunken lawn by the entrance to a train station in Brownsville, an African-American neighborhood, Blue Station Stones comes out of Buchanan’s interest in ancestral African forms that serve as place markers. The eighteen dyed and cast concrete blocks that make up the work turn the site into an intense forcefield. Discolored and overtaken by mildew, partially hidden by vibrant ferns and canopied by oaks, the “stones” teeter on the edge of being lost to the landscape (or the landscaping) like discarded things, yet they remain resolute and dignified. Their somber cuboid shapes evoke the pregnant silences of a necropolis.

In some places, three or four different-size blocks are clustered together. These arrangements pierce the thickly morose ambience with a quiet celebration of resilience, suggesting the possibilities of community, even under adverse conditions. When the hard analogues of bodies find one another, the general tenor is enlivened. Just as they allude to a graveyard behind a church or at a town’s edge, Buchanan’s forms also suggest a circle of lawn chairs in the backyard, gathered as if for a game of dominoes.

While both Magic Mountain and Blue Station Stones are situated in public spaces and share a baseline sameness as colored lithic structures, their visual and affective tonalities are disparate. Rondinone’s monument is largely about bright colors and surface—whether that surface is conceived as the stone itself, an urban space renovated by unmoored capital, or the screens that deliver information across digital networks at any moment. Buchanan’s tunes into a more profound frequency, striving for the deep and sludgy blues that the combination of site, material, and neglect may still be able to conjure. With heavy and disconnected elements spread close to the ground and overshadowed by natural growth and landscape design, Buchanan’s sculpture couldn’t feel any more different from Rondinone’s column, which exuberantly springs up, like a condo tower, in defiance of gravity and modesty. This is how bravery asserts itself. Blue Station Stones does not fear going unseen or unliked. It hinders easy identification. It conveys, in its muted way, that it’s less about visuality than embodied experience and concentrated attention, less about good photos than a careful attunement to context and to the rhythms of everyday life. It refuses to swindle us into feeling good at the expense of feeling complexly. One has to be there—encumbered, focused, dispossessed of easy outs—rather than be tagged in the picture.

IN ITS MIXTURE of melancholy and resilience, Blue Station Stones feels like a close companion to the objects photographed by Onajide Shabaka for his long-term project “Florida Burial Shrines”—a registry of inventive African-American tombstones throughout the state of Florida. The project began in 1987, when Shabaka found a number of handmade burial markers while looking for the unmarked grave of his grandfather, a slave from South Carolina who was buried in Fort Pierce, Florida.[pq]Rondinone’s monument is largely about bright colors and surface; Buchanan’s tunes into a more profound frequency.[/pq]Whether incorporating transistor radios into rough-hewn concrete slabs or tiled with bright porcelain fragments, these objects speak of finitude and continuity,  tragic loss and togetherness in the face of it. These sepulchral objects say this through their improvisatory flair and dignified presence, just as Shabaka’s care in documenting them affirms the value of popular practices that refuse to extricate aesthetics from the textures of everyday life and struggle.

In 1979, as Miami’s community of Cubans in exile swelled and thrived, César Trasobares produced Barrio Drive, a series of photographs focused on the enclosed altars housing religious effigies that were popping up on the lawns of Little Havana. Trasobares relied on an unembellished documentary approach similar to Shabaka’s. By focusing on the altars, Trasobares infused the serial photography of the 1970s with social content, tracing the takeover of the American single-family home by Afro-Caribbean cosmologies and syncretic religious practices. He anticipated the Post-Minimalist use of formal structures as Trojan horses loaded with political commentary and sociological observation. Furthermore, he registered a demographic shift in the city with a cold look at material culture. The straightforwardness of the series, free of long supplementary explanations, makes it credible. Things were changing, and the decoration of suburban lawns evinced it.

But perhaps most important, Trasobares’s photographs, like Shabaka’s, prefigure the current tendency among younger artists to look at the urban grain of Miami in order to acquire a concrete sense of it, instead of being swayed by the easy narratives that define the city. Opa-Tisha-Wocka-Locka (2006–12)—a project by on-and-off Miami resident Kenneth Andrew Mroczek and Belgian artist Anne Daems—focuses on the architecture of Opa-Locka, a Miami suburb with a name derived from an old Seminole place designation. The locale was built in 1926 in a Moroccan Revival style with crenellations, domes, and minarets—an exercise in fantasy-themed architecture that long predates Las Vegas and Disneyland. Following the suburb’s history of transformation from white vacation playground to depressed and drug-ridden African-American neighborhood, Opa-Tisha-Wocka-Locka is a collection of architectural and urban plans, press clippings, advertisements, scholarly and journalistic texts, archive images, videos, interviews, ordinances sourced from code enforcement departments and City Hall, and new photographs. The materials were all finally gathered, after being tested in different arrangements in exhibitions around Miami, in a comprehensive book. Just as Buchanan refused to allow us to glide along the surface, producing instead rich affective tonalities that recall the long, troubled histories that shape our social spaces, Mroczek and Daems tunnel beneath enticing finished architectural forms to put us in the midst of more complex storylines as they unfold through actual documents. The pair refuse to allow us to naturalize the current conditions in Opa-Locka, and instead demand a long view that renders visible the many forces that mark and change our urban fabric.

GEAN MORENO is curator of programs at the Institute of Contemporary Art, Miami.