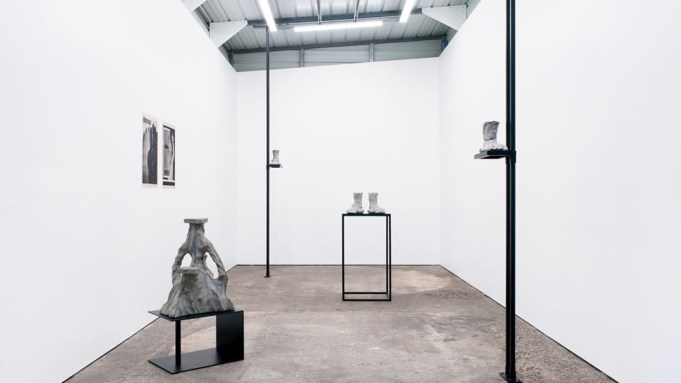 IF YOU DROVE southeast down Third Street from San Francisco’s Museum of Modern Art and just kept driving, hugging the bay as closely as possible, you’d eventually leave behind the touristy San Francisco that guidebooks sell. You’d forget there are hilly sections of town with vistas as lofty as Rome’s. You’d pass into the little nowhere they call Dogpatch, and you’d still be on the same Third Street, but also on another planet, a flat netherland increasingly aerated by artificial inlets, seedy evidence of a once thriving maritime and shipbuilding trade now long in the past, when San Francisco was a harbor city. Later, downtown city planners funneled a once proud black population into projects here, where nothing would grow because of decades of untreated industrial waste. India Basin reeks, exuding a pervasive miasma from chemical compounds likely to adhere to the soil for thousands of years, lodged in the shallow beds south of Islais Creek.

And there you would take a right off Third onto the warehouse-lined Davidson Street. “Like Pete Davidson,” I shouted to my driver, but Ariana Grande sheds boyfriends so assiduously I shouldn’t expect anyone to remember Pete Davidson’s name, not now, in the week George H.W. Bush will finally die. I was about to rap on the door of Hunt Projects, an insalubrious art space on a street—or is it in a parking lot?—where, as far as can be determined, not a single human abides. But it’s the next big thing, we’ve been told, this pocket of soured earth where the dream of artists making work cheaply still smells sweet and vernal, like a daffodil in a dung heap.

Six years ago sculptors Charlie Leese and Kerri Conlon opened Hunt Projects in a former warehouse as a network of studios and shared spaces for young artists, many of them recently graduated from the California College of the Arts or the San Francisco Art Institute. Leese had wanted to create an exhibition space within Hunt Projects, but it was always the first thing to get axed from the budget when a rent hike loomed. Marcella Faustini, one of the first curators to pay him a studio visit, revealed her own ambition of opening a new space, and together Leese and Faustini came up with concept for Cloaca Projects, which opened at Hunt Projects in July 2017. “We program everything together,” Leese told me. “In many ways we are very different, but overlapping interests link us. We do studio visits together, we text, email, DM daily, so we are in constant dialogue. Marcella has incredible cultural knowledge and is deeply critical: our continual conversation really informs the way we program.”

From the start, Faustini’s personal savvy and charm summoned this reporter to the pair’s post-industrial space. Born in Rio de Janeiro, Faustini came to the US in the nineties and spent her teenage years in Florida. I met her when she was working on her master’s degree at CCA with my friend, the artist Kota Ezawa. From 2009 to 2011 she put on a spate of successful exhibitions at a tonier address downtown, the late lamented Noma Gallery, where I first saw the work of Mark Flood, Nate Boyce, Ryan Thayer, Mariah Robertson, and Elijah Burgher. Faustini plays a long game, never easily but always with great thought. With an eye to international developments in the arts of the future, like sound art and net art, she denaturalizes the cultural systems we’ve grown used to in San Francisco. Much of Cloaca’s programming takes place in a storage unit in Hunt Projects’ rustic backyard. After passing through the dim studio and fabrication spaces, one steps out in what passes for fresh air in this sector of town to find a serviceable pizza oven, lawn furniture pertly arranged in a tidy conversation pit, and that big unit, something like a garden shed with a roll-up front door that stays ratcheted open when the shows are going on.

Here at Cloaca a year ago I met the Berlin- and LA-based artist Sonja Gerdes imagining a future in which kind entities convert oxygen into energy. By affixing massive skeins of Yves Klein–blue yarn to similar size portions of black recording tape, Gerdes freezes California soul into ceremonial gothic devices, ritual paraphernalia for processing energy conversion. She tells me and my wife of her pilgrimage through Death Valley and the Salton Sea in the southland—vast dry Mojave spaces varied by gentle hills, on which outsider artists have worked throughout the twentieth century. She drove to Noah Purifoy’s ranch, Leonard Knight’s candy-colored Salvation Mountain, and other sites. Because Faustini has a sense of the mysterious rubber bands that bind together the otherwise distant cities of San Francisco and Los Angeles, Gerdes had in Cloaca Projects the most LA-like space she could possibly have found outside of LA in which to show her rewarding work.

Gerdes’s work is rewarding and also, possibly, crazy, like most of the art I like. And so is the space. What does “cloaca” mean, anyway? Everyone I ask has a different, disgusting answer. In a review for the KQED blog, Sarah Hotchkiss, an artist who is one of the best art writers I know, amusingly describes the way one walks into the warehouse and through its increasingly gloomy, narrow, and darkened interior until emerging outdoors again as an evacuatory ritual. After dark it becomes even more challenging, like witnessing the underclass life Jack shows Rose in the steerage sections of Titanic, but everyone helps everybody up the stairs and around the mats and low benches, and I count an evening event at Cloaca as a jolly, even democratic, holiday.

I’M OLD ENOUGH to remember any number of eccentric, “not a gallery” spaces in San Francisco. Margaret Tedesco’s celebrated [2nd floor projects] occupied her apartment until a recent relocation, and we all think back to the legendary Kiki Gallery in the Mission, which lasted only fifteen months in the early ’90s but which gave early showings to an astonishing number of gifted artists, from Catherine Opie to Vincent Fecteau, from Mark Gonzales to Frances Stark. Kiki was one room with a lofted bed. It was about nine feet wide and nineteen feet long. When you opened the front door you knocked down another gallerygoer.

Cloaca Projects isn’t the only present-day contingent space: there’s the superb Et al., to enter which you must pass through a laundromat in Chinatown and then descend a rope ladder to a subterranean windowless space; and Capital in the Mission, and I can’t even really describe how to get in there. I’ve sensed a drive toward smaller and smaller venues; people still talk about Pied-à-terre, where from 2009 to 2016 one object a month would be installed and lit in curatorial wizard McIntyre Parker’s garage.

For the past twenty years, younger artists have seemed to be in retreat, if not defeated then wistful in the wake of consecutive stock market crashes and irreversible inflation—all the more ironic in that the previous generation, the so-called Mission School, reconfigured public art as activist gesture, bringing their work into the street. Then art turned inward. Last spring the curatorial students in CCA’s class of 2018 established dates for this interior movement. “Artwork for Bedrooms,” their exhibition at the CCA Wattis Institute, surveyed a particular DIY strain of San Francisco art produced from 2000 through 2008, when artists seemed to show their work only to each other. When Colter Jacobsen, Sarah Cain, Veronica de Jesus, and others felt like sharing what they had made, they would open up their bedroom doors and invite friends in to see it.

Recently, in his solo exhibition at Cloaca Projects, artist Matt Borruso installed two pairs of parallel black steel rods between floor and ceiling, each with a small shelf bearing a concrete cast of simian-looking hands/feet. Like other modernist-interior components on view, the poles—cold and chic objects recalling the influential Tension lamp that Francesco Fois designed for Reggiani—were redolent of Italian giallo films of the early ’70s. Critic Rosa Tyhurst (one of the curators behind the aforementioned “Artwork for Bedrooms” show) hailed Borruso’s work in Art Practical as intriguingly aspirational and yet made with cheap, crummy materials. I like the split in apprehension: that fickle feeling when soaring modernism induces sticker shock. “Hands and Feet and Their Supports,” as Borruso named his show, reminded me of the sort of gap that yawns when playful children dress up in their parents’ clothes and try to act as mature and stylish as they imagine Mom and Dad really are. Borruso, a wiser artist than many in our city, has seen the beauty in imitation and the bogus that lies, a poison beetle, in what adults think of as the “real.”

There’s a sense at Cloaca that everything may be attempted, but nothing shall last. Downtown, at John’s Grill, white-aproned waiters direct you to a replica of Dashiell Hammett’s (fictional) Maltese Falcon—the “stuff that dreams are made of,” as Sam Spade remarks in the movie. It’s an allusion forever marking San Francisco as a city in which even broken or endangered dreams linger. I remember one New Year’s Eve when my wife and I asked Faustini if Brazilians had any unique customs for greeting the new year. “If you want money in the year to come, you fold a single bay leaf into your wallet, and when the clock strikes twelve you must also be wearing a pair of yellow underwear.” Ever since then, there are two things you’ll find me doing every New Year’s Eve, and beyond that, during the rest of the year, you’ll find me migrating to whatever shows Leese and Faustini decide we deserve, in the benighted city we love and abhor.