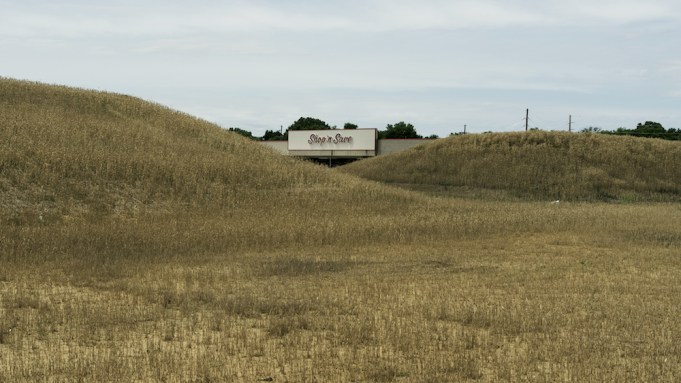 A small irregular hill stands in a predominantly industrial area just south of downtown St. Louis, abutted by the steep banks of the Mississippi River on one side and Interstate 55 on the other. For nearly ninety years, a white frame house sat on top of the mound overlooking the river and the flood plains beyond known as the American Bottom. The house was dismantled this past summer, the hill covered in new sod, and a chain-link fence installed to protect the site. All that remains of the private dwelling are twelve concrete steps.

Sugarloaf Mound, as the earthen rise is known, was purchased in 2009 by the Osage nation, whose members consider themselves descendants of the Mississippians who constructed the earthwork sometime between 800 and 1300 ad. Such pre-Columbian remnants have been regional landmarks for centuries: some of the most prominent within the city limits include Big Mound on the northern riverfront and the series of small mounds scattered through Forest Park. The spectacular earthen monuments of the ancient city of Cahokia, just east of modern-day St. Louis, are part of a UNESCO World Heritage Site. Many other traces of Indigenous civilization were erased long ago, with some mounds used as fill material to build the growing metropolis in the twentieth century. Given the region’s complex history, one of the most iconic views of St. Louis’s skyline is from the top of Monks Mound at Cahokia. Between the ancient ruins and the city is the massive Milam landfill, the groundswell of which surpasses the height of the ancient earthwork.

This region occupies “the heart of the heart of the country,” as recently deceased St. Louis author William Gass wrote. Situated at the confluence of two of the nation’s largest rivers—the Missouri and the Mississippi—St. Louis has attracted a succession of settlements, and its pattern of development, displacement, and decay extends over centuries. Once home to the largest Indigenous community in what is now the United States, the St. Louis area evolved in the twentieth century from an industrial capital to a sprawling network of post-industrial suburbs. Following five decades of population loss, the city center is now scarred with more than twenty thousand vacant parcels and dotted with thousands of ornate brick buildings abandoned by their owners. Just blocks from bustling business districts one can encounter expansive fields and a surreal quiet. For many artists in the city, the landscape itself, defined by such striking juxtapositions, has become an unavoidable subject.

The American Bottom region is the focus of a multi-year initiative led by artist Jesse Vogler and Matthew Fluharty, a researcher and artist who serves as executive director of the cultural advocacy organization Art of the Rural. The project’s primary manifestation is Charting the American Bottom, a website featuring an interactive map of the region, photographs, texts describing key geographical features, and essays examining the poetics of the landscape as well as the histories of conflict and growth that have left physical traces on the terrain. Self-guided tour itineraries lead travelers to disparate locales, including a former Monsanto company town, the archaeological site at Cahokia, and the nation’s first black-only community in Brooklyn, Illinois.

One of the itineraries featured on the site is an illustrated essay titled “Significant and Insignificant Mounds,” which stems from an ongoing collaboration between Vogler and photographer Jennifer Colten, who have researched and photographed Mississippian mounds together since 2016, producing symposia, exhibitions, and publications based on their work. Featuring photographs by Colten as well as writing and historical materials assembled by Vogler, the essay on the Charting the American Bottom site draws upon sources including nineteenth-century descriptions of the mounds, geological surveys, and contemporary theories of urbanism. The pre-Columbian mounds ostensibly at the center of their study cannot be easily distinguished from manifestations of later developments that Colten and Vogler describe as “the residue of industrial activity . . . littered throughout this landscape.” When seen in a series, the slag heaps and Superfund sites documented in the photographs blur into images of the mounds, which are often surrounded by examples of rural America’s informal architecture: grocery stores, strip malls, trailer parks.

Selections of photographs from the pair’s disparate investigations were on view last November and December in a mobile exhibition space organized by the Center for Land Use Interpretation, a nonprofit based in Culver City, California. The apt venue was a construction trailer located in the Granite City Art and Design District (G-CADD), a development on the site of a former Illinois steel town across the river from St. Louis. Founded by art organizer Galen Gandolfi, G-CADD comprises several distressed buildings that have been repurposed as gallery spaces identified by blunt terms like “Insurance,” “Grease,” and “Plaque.” Artist Christopher Carl has modified the surrounding grounds with a distinctive form of small-town Land art that he calls, with wry humor, “New American Gardening.” He’s cut away strips of asphalt in a parking lot, clearing the way for a flowerbed, transformed a building with a fallen roof into a structurally sound pavilion, and repurposed concrete curbs for a water reclamation project. G-CADD foregrounds the town’s industrial past while allowing for artistic interventions, and dozens of artists have brought the site to life with an expanding array of exhibitions.

Juan William Chávez raises similar questions about patterns of development and decay, but often focuses on St. Louis’s dramatically disinvested Northside through a practice that includes film and photography, site-specific installations, and socially engaged experiments. For Untitled (Sacred Real Estate), 2012, at Laumeier Sculpture Park, the artist erected fourteen reclaimed street lampposts in a configuration based on the full-scale footprint of a building from the Pruitt-Igoe complex, a modernist public housing development that was demolished in the 1970s. While referring to a fraught icon of twentieth-century St. Louis, the posts also alluded to an ancient timber earthwork at Cahokia known as Woodhenge. Chávez’s best-known work is a proposal to establish a bee sanctuary at the actual site of Pruitt-Igoe. The 57-acre plot, where thousands of people once lived in modernist high-rises, became overgrown, turning into full-fledged forest in the middle of the city. Chávez envisioned a series of massive beehives dotting the site, the blocky forms of which would recall the Pruitt-Igoe buildings. (The work has evolved from provocative speculation to permanently shelved proposal, as the land has recently been clear-cut again for a planned medical complex.)

The bee sanctuary proposal nonetheless led to a more lasting intervention in the form of Chávez’s ongoing nonprofit, Northside Workshop, housed in a rehabilitated two-story brick house. Operating alongside Urb Arts and the 14th Street Artist Community, established cultural anchors in the Old North neighborhood, the workshop offers classes in beekeeping and gardening as well as peer support groups for neighborhood residents. Still, vacant buildings dominate the surrounding area. As shown in Chávez’s 2010 “Brick Eaters” series of photographs and films, thieves often dismantle buildings entirely in order to recover and resell pallets of bricks, which out-of-town developers value as a means of giving new condos the appearance of historical authenticity.

Sage Dawson’s printmaking practice likewise takes the city’s ubiquitous brick as a starting point. Her series “Brick Myth” (2016) and “Not Unlike a Buried City” (2016) use the distinctive ornamentation on the city’s famous bricks as a readymade pattern. Dawson prints fabrics with brick impressions and then constructs temporary tent structures from the material, suggesting a meditation on permanence and impermanence in building. Carlie Trosclair’s work responds poetically to similar phases of disrepair affecting domestic settings. Trosclair often works directly within abandoned homes throughout the city, photographing her interventions. She peels away layers of wallpaper and makes light cuts into the interiors of collapsing houses to reveal layers of history. She also produces latex molds of balustrades and doorways of the homes, ultimately bringing these “traces” into gallery and museum spaces.

These poetic visions find a more ambivalent counterpoint in Amanda Williams and Andres L. Hernandez’s recent A Way, Away (Listen While I Say). In spring 2017, the two artists were commissioned by the Pulitzer Arts Foundation and the Sam Fox School of Art and Architecture to create a new public work in the Grand Center Arts District. Their plans shifted midway through the project when they discovered that the nearby Bruno David Gallery was slated for demolition. Located directly across from the Pulitzer and the Contemporary Art Museum, the gallery had been a routine stop during the past decade for those visiting the larger institutions. When Williams and Hernandez learned that a routine inspection of the building revealed critical structural flaws, they decided to make the demolition of the gallery into a multifaceted art project.

The pair painted the building gold temporarily to convey its value. After the demolition, they distributed recovered bricks across the region to other artists and community groups, who used the material to build a garden at Arthouse, a communal table at G-CADD, and a gathering space at Tillie’s Corner, a historic hub for black-owned businesses. Yet the project was not without its detractors—particularly Trosclair and prominent architectural historian and theorist Michael Allen, who felt that the structure should have been saved and renovated rather than cannibalized. In protest, Trosclair and Allen wrapped the structure in warning tape that read waste not want not. The episode poses a number of challenging questions, pertinent in numerous post-industrial cities: how should a city and its artists deal with decay and vacancy? When is a structure worth saving, and when might it be recycled, giving rise to new possibilities?

In a seminal 1929 statement titled “Bauhaus and Society,” short-time Bauhaus leader Hannes Meyer proposed that “all creative action is determined by the fate of the landscape, which is unique and unparalleled for the one settled down, the work being personal and localized. . . . As creators we fulfill the fate of the landscape.”1 The fate of the St. Louis landscape is certainly contested. The city is no longer a primary gateway, but its status as prototypical post-industrial city recovering from fifty years of decline speaks to broader tensions throughout the nation. For artists in St. Louis, the fissures that mark the city are personal and localized, the landscape posing entry points for future action.