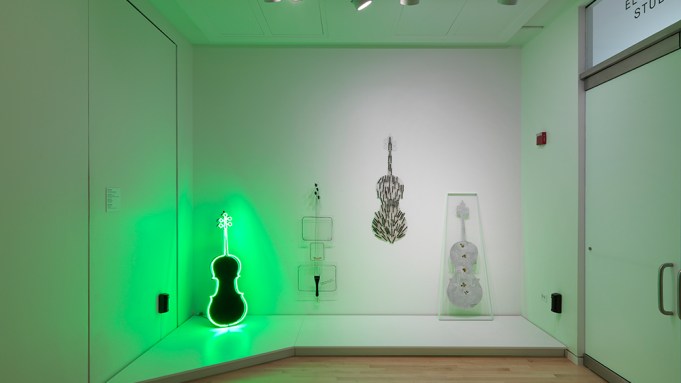 Is there any other artist whose body is as routinely conflated with her oeuvre as Charlotte Moorman? “Discover why Charlotte Moorman was called [. . .] the Topless Cellist” is the Barnumesque lure on a postcard advertising “A Feast of Astonishments: Charlotte Moorman and the Avant-Garde,1960s-1980s” at the Mary and Leigh Block Museum of Art—as if viewers couldn’t work out the reason for the appellation on their own. The exhibition itself—the first survey of Moorman’s work—reconstructs the life and career of an inestimably important figure of the American avant-garde in a far more sensitive manner. If Moorman’s peer Allan Kaprow is lionized as a pioneering advocate for “the blurring of art and life” (as the title of his collected essays has it) in the heady days of the 1960s, Moorman’s near absence from the art-historical record demonstrates what became of a woman who lived by this ethos.

Moorman, whose biography is outlined by Drew Daniel in A.i.A’s current issue, assembled a daunting amount of material in her archive. The Block curators rose to the challenge of organizing it beautifully, using the museum’s separate levels to orchestrate a conceptual shift. On the ground floor, a trio of monitors and projectors displays emphasize Moorman’s conceptual engagement with video and television; upstairs, a whirlwind of ephemera approximates the giddy creative chaos she cultivated around her.

On a small monitor installed in a visitor’s lounge in a corner by the front desk, a 1966 video by Jud Yalkult intended to be a Coke commercial superimposes images of Moorman playing her instrument and swigging soda from a bottle. The piece exemplifies Moorman’s ambition to popularize the avant-garde. Inside, the gallery is divided by a temporary wall. A documentary about Moorman’s life plays on one side. On the other, a screen offers program of eight pieces that resist both generic categorization and the logic of the single-artist retrospective. Jackie Cassen’s Waiting for Commercials (Performance), 1972, tweaks documentary footage of Moorman’s and Nam June Paik’s performance of the same name, splicing in gratingly cheerful Japanese television commercials. Moorman played no role in the production or editing of any video in the program; she instead worked collaboratively with artists like Cassen and Paik, keying the performances these works feature to respond directly to the visual and temporal possibilities of television and video. This theme of creative generosity sets the tone for the exhibition that continues upstairs.

Paik’s Charlotte Moorman II (1995) stands sentinel outside the doors of the second-floor gallery. In a tender tribute to his collaborator, Paik arranges an upright bass and oblong Motorola monitors to suggest a human torso and limbs. Two small Sony screens flicker from niches in the instrument’s “chest,” and a glowing TV head caps it off. Technicolor images of Moorman beam from every monitor: she plays a cello fashioned from a stack of TVs, she bows a string instrument built from a bomb, she plucks a string that stretches from the top of a man’s head to the palm of the hand that he holds behind his back.

Of the works on view, only Paik’s portrait and a series of cello-shaped objects that Moorman produced in the late 1980s—from paper, neon lights, discarded syringes, and other materials—could be classified as sculptures. Most objects in the upstairs gallery are fragmentary remnants of performances, but are no less intriguing for it. Splintered violins that Moorman shattered at various performances of Paik’s One for Violin (1962) rest in a long vitrine. Nearby, a case holds masks worn by Moorman at the infamous 1967 New York performance of her and Paik’s Opera Sextronique, when she was arrested for indecent exposure. The stout forms of two versions of Moorman’s Bomb Cello (1965 and 1990)—which she made by affixing cello strings, pegs, and bridges to World War II-era surplus “practice bombs”—loom on a low pedestal. Nearby, a monitor shows footage of Moorman’s appearance on The Mike Douglas Show in 1969. Though the audience howls and Douglas looks deeply skeptical throughout Moorman’s performance of her signature piece, John Cage’s 26’ 1.1499” for a String Player (1955), a singular moment of synthesis in American art and popular culture unfolds: Moorman passes effortlessly from near-total obscurity into the living rooms of America through the medium of television.

Documents outnumber objects here. Photographs, musical scores, posters and performance fliers coalesce around wall texts that link them to key performances and events in Moorman’s career. The overall effect is comprehensive without being cluttered, as if the pages of the exhibition catalogue have been built out for viewers to walk through. The spatial order is countered by sonic anarchy, as the curators let the plethora of video and audio pieces talk over each other. A speaker hung from the ceiling plays a recording of Moorman describing her arrest, which mingles with the sounds of works that she programmed for different iterations of her Annual Avant Garde Festival. The keening wail of Yoko Ono’s film Fly (1961), a last-minute addition to the Eighth Festival, sounds a literal high note. The tinny soundtrack to a 2015 recreation of Carolee Schneemann’s and James Tenney’s performance of Noise Bodies at the Third Festival in 1965 is indiscernible from the crunch of viewers walking over mason jar lids scattered on the floor nearby, the detritus of Max Neuhaus’s American Can, originally performed for the Fourth Festival the following year.

Moorman’s open-call festivals of experimental music, performance, and art featured big names like  Ono, Cage, and John Lennon (whose billing at the 1971 Festival drew huge crowds), among other, more obscure practitioners. Acid-colored posters (designed by Moorman’s frequent collaborator, Jim McWilliams) crammed with the names of participating artists and tiny Styrofoam facsimiles of artist-designed floats that were paraded down Central Park West at the Sixth Festival in 1968 convey some of the frenetic energy.

The kaleidoscopic cycling of artistic partners, works, and performance events throughout the exhibition reveals that one of the most vital aspects of Moorman’s practice is also the cause of her historical neglect: a genius at orchestrating the brilliance of others, Moorman’s legacy could gain no foothold in art-historical frameworks that insist on articulating avant-garde gambits in terms of seminal gestures and individual genius. “A Feast of Astonishments” is an encouraging sign that this may finally be changing.