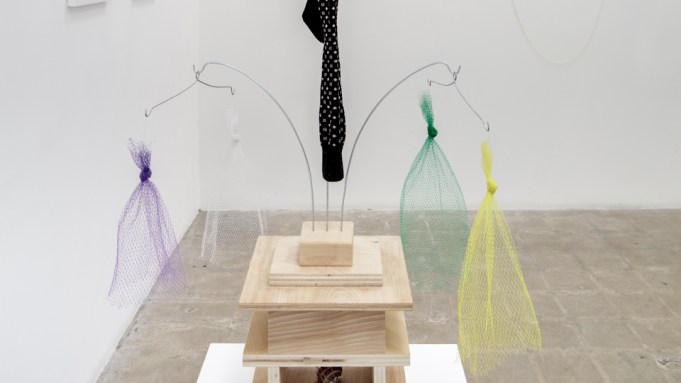 The group show “B. Wurtz and Co.” at Richard Telles Fine Art, Los Angeles, announces itself plainly [on view through April 21]. Engraved onto an office placard, the title, adapted from a 2001 MoMA exhibition, “Walker Evans and Co.,” juts out on high from a copper mount in the corridor to the main gallery. Just as Evans’s everyday subject matter influenced generations of artists, Wurtz’s exploration of detritus served as a fulcrum for many of his peers and successors. Curated by White Columns director Matthew Higgs, the show charts the impact of the unsung artist, featuring 10 emerging, midcareer and outsider artists whose waggish visual poetry resounds with Wurtz’s delicate works of found and recovered objects.

“B.’s art has always been rooted in life’s basics, food and shelter,” Higgs told A.i.A. of the 64-year-old, New York-based artist. “From the outset, in the early 1970s, he took this idea of fundamentals as a manifesto.” An untitled 2006 work by Wurtz, resembling a flattened totem pole, hangs to the left of the main entrance. It comprises recycled food container lids and index card-size collages of magazine clippings, with pictures of vegetables outlined in red with white acrylic grounds. Stacked atop one another and hung low along an exposed yellow thread, this unclasped necklace of asymmetrical objects creates a sense of psychological fragility and heaviness. “It maintains a less confident idea of the whole of life, one that is fragmentary and precarious,” says Higgs.

Works in the main gallery reflect this instability using broken lines. Al Taylor’s Untitled: (Tap), 1988, made of four wooden posts held together by gold metal hinges, protrudes  at a perpendicular from the wall, where it is mounted on a thin plank laminated in white Formica. Dangling inches from the floor, the composition fractures the look of water running from a spout, frozen before filling up the gallery space. That stillness is countered in Martin Creed’s small-scale drawing, Work No. 1329 (2011), whose overlapping loops of marker trail off in the picture’s margins.

“Many of the artists here use lines, strings and wire as forms of making connections, linking, or attempting to hold things together,” says Higgs. “I see this approach as an attempt to somehow control things that might otherwise be loose, formless or unstable.” Though not directly influenced by Wurtz, the deceased outsider artist Judith Scott, known for her obsessive fiber sculptures, and an anonymous artist known as the Philadelphia Wireman nevertheless reflect this compulsion for order and its inevitable chaotic result. Scott’s Untitled (2000) is a massive web of tan and brown yarn with red accents, all layered on top of one another. It amounts to a cocoonlike structure supporting an indeterminate core object.

The Wireman’s small sculptures, a series of eight on a shelf, are composed of objects sheathed in varying densities of tangled wire. A Riviera brand glasses tag, comic strips and newspaper, a straw and a pen are just some of the items the artist has bound in silver wire, creating a protective structure or armature as Higgs sees it. The installation resembles a collection of tchotchkes, and suggests the artist’s attempt to know common objects by removing them from pedestrian use and abandonment. This experiential, improvisational way of working with accumulated debris, playing with abstraction, is also seen in the shredded Frankenstein mask of Richard Hawkins’s Scalp 13 (Remember the wonderful days when “identity” encompassed “fluidity”?), 2012, which hangs as an unraveled mass above a Spicy brand shoe box, as well as Gabriel Kuri’s rainbow assembly of flattened, tattered Euro coin wrapping papers in V5 (2011).

The exhibition continues into Telles’s second space on Martel Avenue, which features Wurtz’s Untitled (2009) atop a plinth. Multicolored fruit bags dangle from metal wire balances that mimic the look of supermarket scales, projecting from the wooden base like fireworks. Sliced open at their bottoms, the mesh plastic wavers as air circulates in the room. Noam Rappaport’s manipulated support in Not Yet Titled (2012) works in an analogous way for painting. The artist has excised a circle from the center of his unprimed canvas, leaving a shallow form in its wake. Vincent Fecteau, Joe Fyfe and Udomsak Krisanamis, also included in the exhibition, make material into art using simple interventions.