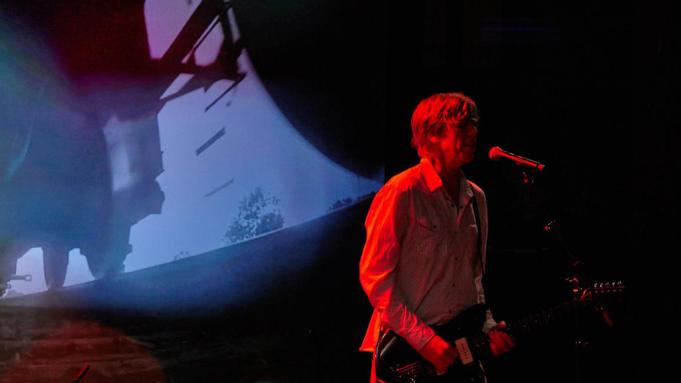 Several months ago I met the L.A.-based video and multimedia artist Doug Aitken, who told me of his plans, years in the making, for a three-week cross-country trip aboard a specially outfitted train, with several stops en route. At each stop, he said, there would be a different “happening,” combining installations, concerts, performances, videos and various attractions, such as locally sourced food (for example Ed Ruscha making cactus omelets in Arizona). Some of the participants, including artists and musicians, would travel together on the train in a spirit of collaboration. I wondered how Aitken could possibly pull off such a utopian and outlandish scheme.

He did, including substantial sponsorship from Levi’s and extensive assistance from a host of collaborators, including several people from the art and events organization FredThinks; various art, moving image and music curators; none other than Alice Waters, billed as the food curator; and nine partner cultural institutions. Station to Station is underway, and it’s among the most refreshing art events I’ve experienced in years. The launch was in Brooklyn, with subsequent “happenings” in Pittsburgh; Chicago; Minneapolis/St. Paul; Kansas City; Santa Fe; Winslow, Ariz.; Barstow, Calif.; and Los Angeles, culminating in a Sept. 28 event in Oakland/San Francisco, almost all sold out. This train trip/extravaganza, winding its way through the country, connects with enduring American themes: heading west, the vast landscape, the culture’s diversity, and the romance of train travel. At once freeform and professional, improvisational and expertly curated, this highly mediated excursion (check out the website) also evokes road trips of various kinds, including rock bands on tour, Neal Cassady and the Merry Pranksters on their unusual bus and Jack Kerouac’s On the Road. With its visual twinkle (the train is decked out with LED lights) and entertaining spectacles, it also reaches back much farther, to 19th-century traveling circuses and carnivals by the likes of P.T. Barnum.

I caught up with Station to Station in Pittsburgh, under the rotunda in the cavernous great hall of the Beaux-Arts Union Station. Four homemade yurts-modeled on the traditional dwelling structures of Central Asian nomads-house installations; these are the “permanent” works, exhibited throughout Station to Station, which otherwise takes different incarnations at each stop. A glowing, vaguely diabolical red yurt is the perfect place for three of Kenneth Anger’s experimental films, including Lucifer Rising (1972), with its bubbling lava, lurking alligators, occult rituals, and Egyptian scenes. Ernesto Neto’s yellow yurt, memorably titled Soul breathing, buddy…Ahhh (2013), is a supple, loosely biological wonderland of soft spandex walls and floor, and vertical orange stalks. As you touch the fabric structures, and recline on the yielding floor, this fleshy mini-environment, bathed in light, is mesmerizing and transporting. Fog billows from Urs Fischer’s white yurt, which has mirrored walls, a glittering disco ball, and a luxurious bed where people can lounge.

The young Los Angeles artist Liz Glynn is the only one of the artists who will be on the whole trip. Her black yurt (you need to wear headlamps, because it is very dark inside) houses an ever-changing, mazelike structure made of hanging felt. As you inch and feel your way through the narrow corridors of Model Universe (2013), you see on the walls cryptic chalk drawings that are residue of her various public talks/performances pertaining to physics and the origins of the universe. Her talk in Pittsburgh, delivered as a fetching stream-of-consciousness monologue, was on relativity (you can watch an excerpt here). A fifth yurt, by Carsten Höller, which wasn’t on view in Pittsburgh but will be elsewhere, includes openings through which viewers can enter, but also toss frisbees and balls. In between art viewing you could partake of artisanal cheeses, wild mushroom tapenades and other local fare.

Inside the station were the concerts, all unannounced, so that they seemed to just happen, filling the building with loud, reverberating music. No Age, the post-punk Los Angeles duo, kicked things off with a raucous set. A performance by Boredoms drummer YOSHIMIO, Hisham Akira Bharoocha and Ryan Sawyer accentuated dense, rippling percussion. Another duo, Thurston Moore and John Moloney, was riveting, and twined Moloney’s crashing drums with Moore’s experimental guitar. Completing things was the trip-pop sound of Ariel Pink’s Haunted Graffiti. Interspersed were different kinds of music: two caterwauling auctioneers suddenly doing their thing, along with an expert whip cracker, and outside, the percussive dancing, stomping, yelling and whistling of the Kansas City Marching Cobras. Each concert was accompanied by videos on three projection screens at the back of the stage, showing rushing trains, roadside motels, barcodes and machines, making for an associative mix of images and music. While Aitken’s touch is not at all heavy, his sensibility and aptitude for compelling moving images pervades Station to Station.

Throughout the evening, before and between concerts, other videos constantly played on these three projection screens, including Cheryl Donegan’s Head (1993); Yayoi Kusama’s Self-Obliteration (1967); Roman Signer’s Bett (Bed, 1996), in which a scary, remote-controlled toy helicopter flies above and investigates the artist, sleeping in a bed. Viewers also saw Ryan Trecartin’s costumed, ranting young people and a new film by Thomas Demand in which a train bursts through a white monochrome field. Music is a definite attraction, and quite a lot of people will come to hear Thurston Moore (formerly of seminal indie rock band Sonic Youth), Cat Power, Beck, No Age, Patti Smith and Mavis Staples. Jackson Browne will perform in Winslow, Ariz., fitting because he wrote most of the lyrics for the Eagles’ megahit “Take it Easy” (“Well I’m a-standing on a corner in Winslow, Arizona/It’s such a fine sight to see”). As they do, they can also watch and absorb a generous and eclectic range of video art.

I also took a brief tour of the train, which includes older cars from the mid-20th century heyday of American train travel, and transformed Amtrak cars. Inside are textiles by Jorge Pardo, a kinetic drawing machine by Olafur Eliasson that allows the train’s motion to produce drawings, and all sorts of other art. There is also a video production center and a music rehearsal space. As this train travels through America, it’s much more than a vehicle. It is a thriving temporary community; an in-process, art-producing laboratory, and a protean, mobile institution that constantly embraces new participants and engages diverse audiences. Moreover, the Station to Station Cultural Fund, fueled by ticket sales, merchandise, art sales and both corporate and individual donations, will distribute grants to the project’s various partner institutions, in support of alternative programming in 2014. With its quest and exuberance, Station to Station is clearly on one heck of a trip.