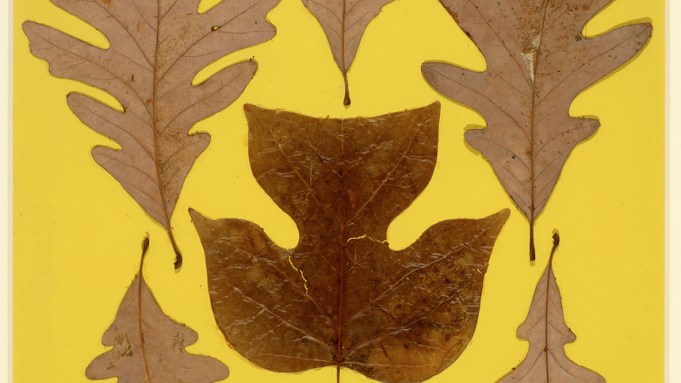 Black Mountain College has long been considered by many to be the birthplace of the American avant-garde. Today, interest in the legendary school, which operated from 1933 to 1957, seems at an all-time high. My shelves strain under the weight of several very large books about Black Mountain College published in recent years, including the massive catalogue for “Leap Before You Look: Black Mountain College, 1933-1957,” a show organized by Helen Molesworth that premiered at the Institute for Contemporary Art, Boston, this fall and is now at the Hammer Museum, Los Angeles. With the rise of MFA programs and the accompanying professionalization of the arts, Black Mountain’s fabled atmosphere of collaboration, experimentation for experimentation’s sake and disregard for traditional teacher/student hierarchies—all set in the dreamy outdoor setting of a North Carolina mountain town—beckons to us from the grainy black-and-white photos in these books, offering a tantalizing possibility that a different art world is possible. Faced with cutthroat competition to get into an A-list school and the certainty of massive student debt once accepted, who could blame today’s MFA student for daydreaming about lying in the long summer grass, sharing ideas about art and life with Black Mountain all-star faculty members like John Cage and Robert Rauschenberg?

Increasingly, however, such dreams are turning to action—most notably in the case of the shocking May 2015 walkout of the University of Southern California’s MFA class of 2016 (now known as the USC Seven), who left the program as a group while issuing collectively signed communiqués about their grievances with school administration over cuts in promised funding, treatment of tenured faculty and, perhaps most important, the very direction of the school’s plans to emphasize already well-funded tech and design education over fine art.

So perhaps it shouldn’t have been a surprise when a group of young DIY cultural producers announced in January their plans to launch a new art school this summer in the spirit of the original Black Mountain College. What was surprising, though, is that they have boldly decided to open their school on the very site of the original. “Given the current state of public and private higher education,” organizers of the new experiment, called the Black Mountain School, wrote on their website, “we are presenting an alternative—a collaborative learning environment where educators create the content of study, students determine their level of engagement, and tuition is affordable for all.”

The somewhat inscrutable site offered little more than an open call for applications from prospective students, and a page of grainy black-and-white photos of the organizers that could have been lifted from the “Leap Before You Look” catalogue. The decision by disaffected potential art students to organize their own education would seem the next logical step after the USC Seven walkout. But the provocative choice to open the new school in the shadow of the Black Mountain legend raises its own questions: Is this the opening salvo to a new era of young artists throwing off the yoke of MFA tyranny to seize the means of their own collective education? Or, could the Black Mountain School turn out to be simply a new generation’s deflating reenactment of past countercultural glory? In short, is this another Woodstock ’94?

In an e-mail conversation, Chelsea Ragan and Adam Void, the Asheville, N.C.-based artists who founded the new school, turned the question of nostalgia on its head, insisting on the importance of the site itself rather than its role in art history. “Our main inspiration for creating Black Mountain School came from experiencing the ‘spirit of place’ in these mountains,” they wrote. “Why not tap into that energy?”

Last week, the Black Mountain School released a list of over 40 classes to be taught by some 50 instructors, most of whom will live, sleep, eat and work with the students (they anticipate attracting about 60) at the original Lake Eden campus beginning in late May. While Black Mountain College was a year-round liberal arts college offering a general course of study, Black Mountain School’s month-long session focuses mostly on studio art practice. Its efforts can perhaps best be understood, then, as an intensive residency. Disciplines on the course list include screen printing, filmmaking and mushroom hunting, taught by a multigenerational faculty that includes Joe Ahearn, who works at the Silent Barn, an all-ages art and music venue in Bushwick, and Tim Kerr, founder of the Big Boys, a pioneering Texas punk band. In the improvisational spirit of the original school, the organizers have left space open in the schedule for classes taught by students, to be proposed once school is in session, as well as “lectures, workshops, and events, both planned and unplanned.”

Due to its lasting reputation as a place of open-ended, free-form experimentation, it is often forgotten that Black Mountain College was originally organized around a very rigorous pedagogy. Josef Albers, the first head of the painting program, believed that the core of art education should be mastering the contingency of perception. Albers had students perform repetitive drawing exercises and experiments collaging colored paper in hopes that these would convey the constructed nature of reality. The curriculum of the new school, however, is concerned less with questions of form, color and material than with a set of DIY values that are presented in opposition to the polish of today’s art world. Course offerings draw heavily from countercultural experiments of the past—Fluxus instructions, William Burroughs’s cut-ups, the punk and hip hop movements, graffiti and the Situationist dérive (“participants and instructors will explore the psychogeography of the [Asheville] YMCA and downtown Black Mountain”).

The Black Mountain School might be seen as a parallel phenomenon to the host of recent art exhibitions celebrating past movements that embody the values of collectivity and intuitive intellectual inquiry widely believed to be missing in the art world today. While an exhibition and a classroom offer quite different terms of engagement, it’s instructive to consider how these exhibitions have succeeded or failed as the new school’s organizers walk a similarly delicate line between using historical examples to activate and inspire and veering into nostalgia.

The best of these recent shows have demystified the past by presenting the material in a way that helps audiences directly connect lost histories to the present. “Energy That Is All Around: The Mission School,” which debuted at the San Francisco Art Institute in 2013, focused on the formative years of the Mission School in the early ’90s, highlighting the importance of friendship and collaboration among then-unknown artists and their devotion to making non-monetized work with found materials in the streets of San Francisco before the tech booms. The infectiously enthusiastic early work of Alicia McCarthy, Barry McGee and others was presented as the result of a set of shared values that could be easily taken up today by young artists in opposition to the present art world’s corporate values. Similarly, “What Nerve! Alternative Figures in American Art, 1960 to the Present,” held at the RISD Museum in 2014, celebrated art collectives like the Hairy Who and Forcefield, who made collaborative and experimental work for its own sake far removed from what we commonly understand as the corrupting influence of the New York art market. The result was a generous and revelatory effort that championed the geographical and financial margins as a place of artistic possibility where important art and community has been—and can still be—made.

Other exhibitions of important experimental work, however, have promoted instead an oddly deflating and disempowering nostalgia. “Rituals of Rented Island: Object Theater, Loft Performance, and the New Psychodrama, 1970-1980,” at the Whitney Museum of American Art in 2013, confronted visitors at its entrance with an enormous map of Lower Manhattan that depicted an abundance of cheap lofts and underground venues unimaginable in today’s real-estate market. Wall texts emphasized the curator’s conviction that Jack Smith, Laurie Anderson and others could only make their renegade ephemeral art because of access to lucrative grants from the National Endowment for the Arts. In truth, these artists developed new art forms that required little money or other resources, and often presented the results in their own homes. That could happen again, but the show presented historical realities as if the possibility for such experimentation belongs to an irrevocably lost past.

Black Mountain College founder John Rice believed that if the school could impose the correct set of conditions, an utterly unique, freeform and nonhierarchical flow of ideas between teachers and students would inevitably follow. What the above exhibitions all share with Black Mountain College—and with the new school—is the foregrounding of circumstances that might alchemically generate new and important art and thinking. Romanticized conditions like cheap rent in dense urban neighborhoods, the crucial balance between proximity to an organic artist community and isolation from the art market, and an art education that emphasizes intellectual inquiry and collaboration over individual financial success come up again and again as ideal conditions that are vanishing from the art world and academia. This summer, the organizers of the new Black Mountain School will seek to reconstruct a lost environment in hopes of yielding a powerfully new set of results. Only time will tell if an encounter between a hallowed site’s mythology and the students of a new era can spark a genuinely distinctive sensibility. Yet it is worth remembering that Rice decided to start his own school only after he had been fired from his tenured position at Rollins College in Florida for his radical ideas about pedagogy. The new Black Mountain School reminds us that new conditions can only be established when the old ones have become intolerable.